The Washington Nationals got knocked around by the St. Louis Cardinals in a 12-2 loss, but the Atlanta Braves' loss to the New York Mets made it a little easier to take.

• Magic Number: A blowout loss at this time of the year can lead to some unhealthy/stress-inducing activity... like scoreboard watching. As the NL East's first-place Washington Nationals watched Edwin Jackson get knocked around and out early in the series opener in St. Louis, the Cincinnati Reds were in Pittsburgh where Homer Bailey threw a no-hitter against the Pirates to lead the Reds to their 95th win of the year, leaving them (95-62) after 157 games. Fortunately for the (95-61) Nationals, as the evening went on and a comeback appeared less and less likely, the Atlanta Braves blew a 1-0 lead in the seventh and dropped a 3-1 decision to the New York Mets, meaning the Nationals' magic number to clinch the NL East would be down to 2 regardless of the outcome of their game with the Cardinals. No one wants to back into a division crown. But the Nats will likely take it. Here's how tonight's loss to the Cards went down...

• Good Start: 19-year-old Washington Nationals' outfielder Bryce Harper spit on back-to-back curves from 31-year-old St. Louis Cardinals' right-hander Adam Wainwright to go from an 0-2 to a 2-2 count, and Harper then fouled off a 93 mph sinking fastball, and took another sinker outside before lining to right on the full-count pitch for his 24th double of 2012. Wainwright got just-turned-28-year-old Nats' third baseman Ryan Zimmerman swinging with a 2-2 cutter for the second out of the opening frame, but 32-year-old Nationals' first baseman Adam LaRoche drove Harper in with a single to right for a 1-0 lead in the series opener in St. Louis. Wainwright needed 21 pitches to get through the top of the inning against the Nats.

• Bad Start: Edwin Jackson's last start against St. Louis saw him throw seven scoreless before surrendering an unearned run in the eighth inning of an 8-1 Nats' win. Tonight's outing didn't go as well for the Nats' right-hander. Two pitches into the bottom of the inning Jon Jay had the Cards' first hit off Edwin Jackson when he lined an 0-1 fastball back up the middle. Matt Carpenter took the first walk of the game from the Nats' right-hander in the next AB. Ian Desmond had to field a one-hopper to short back on the lip of the outfield grass, so his snap throw to second arrived too late for the force. Bases loaded. Allen Craig singled to left on the first pitch he saw, tying it at 1-1. Ryan Zimmerman charged Yadier Molina's swinging bunt, but came up empty as another run scored. 2-1 when the run came in from third. Still bases loaded, no outs recorded...

Jackson went to a full count with Carlos Beltran and issued a bases loaded walk that made it 3-1 Cardinals. No one out. Daniel Descalso's sac fly to center made it 4-1 and advanced both runners into scoring position so Molina could score on a bloop single to center by Pete Kozma that made it 5-1 before Adam Wainwright mercifully grounded into an inning-ending 6-4-3 in the next AB and E-Jax was through one after 31 pitches overall.

• Wainwright Rolling: Ian Desmond sent a low liner back up the middle for a leadoff single in the Nats' second, but two outs later he was still standing at first as Adam Wainwright retired Danny Espinosa and Kurt Suzuki in consecutive at bats. Davey Johnson stuck with Edwin Jackson and let him hit with two down and the opposing pitcher walked to get Jayson Werth up with two on, but the Nats' right fielder flew out to right to strand two and end a 16-pitch frame by the Cardinals' starter.

• 56 Pitches And Out: Edwin Jackson went up and in on Jon Jay with an 0-2 fastball then missed with the 1-2 pitch before surrendering a leadoff double to center in the first at bat of the Cards' second. Edwin Jackson bounced a fastball by Kurt Suzuki to move Jon Jay up 90 ft. Jackson walked Matt Carpenter in the next at bat to put two on with no outs. Carpenter stole second on another pitch in the dirt from E-Jax. Ian Desmond had a sharp grounder bounce off his glove, but he recovered barehanded the ball and threw Matt Holliday out at first as the Cards' sixth run scored, 6-1. Allen Craig's RBI line drive to right made it 7-1 and ended Jackson's nigh... ? Nope. Yadier Molina hit a two-run home run to left in the next at bat. 9-1 Cardinals on Molina's 22nd. Jackson missed with a 3-1 pitch to Carlos Beltran and was done after he walked the Cardinals' outfielder with his 56th and final pitch of the night. Tom Gorzelanny was finally warm.

• Zim's Double! A Highlight!!: With one down in the third, Ryan Zimmerman lined a 90 mph 1-2 sinker from Wainwright to center and over Jon Jay's head for the Nats' third baseman's 35th two-base hit of 2012. Zim took third when Adam LaRoche lined out to left, but was stranded there when Michael Morse K'd swinging to end a 17-pitch third by the Cards' starter. Ryan Zimmerman sent LaRoche reaching across the basepath into foul territory off first to catch the final out of a nine-pitch, 1-2-3 bottom of the third, retiring the fourth-straight batter after he took over on the mound. Adam Wainwright threw a nine pitch, 1-2-3 top of the fourth to push Gorzelanny right back onto the mound. Allen Craig was 3 for 3 tonight after he lined to center with two down in the Cards' fourth, breaking a streak of six-in-a-row retired by Gorzelanny after he took over for E-Jax. The Nats' lefty walked Yadier Molina with two down, then put Carlos Beltran on too to load the bases before he retired Daniel Descalso to end the frame. Still 9-1 Cards.

• Craig 4 for 4: Bryce Harper lined a first-pitch change to center for a two-out hit off Wainwright in the top of the fifth, but he was forced out at second on a Ryan Zimmerman grounder to short. Another nine pitch inning for the Cards' veteran right-hander. Christian Garcia retired the Cardinals in order in a 14-pitch bottom of the fifth inning. After Adam LaRoche flew to deep right, Michael Morse ripped into an 0-1 sinker from Wainwright, but lined out to short when Pete Kozma made a leaping grab for the second out of the sixth. Ian Desmond's swinging K ended another nine-pitch inning by the Cardinals' starter. Christian Garcia returned for the bottom the sixth and hit Matt Holliday to put a runner on with one down before giving up a single by Allen Craig (4 for 4) that sent Holliday's pinch runner around to third. A grounder to short by Yadier Molina started a 6-4-3 DP though and Garcia was through two scoreless innings in relief.

• [CHOMP!]?: Cards' reliever Joe Kelly gave up a two-out solo home run by Roger Bernadina that gave the Nats their second run of the game in the seventh. 9-2 Cardinals. One batter later, the Cardinals' right-hander was through a 22-pitch inning with St. Louis ahead by seven. Zach Duke threw a 10-pitch, 1-2-3 bottom of the seventh, retiring Carlos Beltran, Daniel Descalso and Pete Kozma in order. Trevor Rosenthal issued a leadoff walk to Tyler Moore then retired the next three Nats in order in a 20-pitch to of the eighth. Michael Gonzalez gave up a leadoff double by Tony Cruz, a one-out RBI double by Matt Carpenter and a two-run home run by Shane Robinson (no.3) that made it first 10 and then 12-2 St. Louis in the Cardinals' eighth. 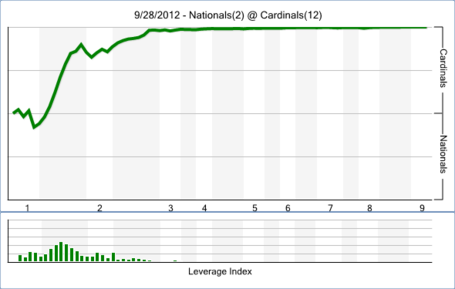