Washington Nationals Will Have To Clinch At Home In D.C. If They Do; St. Louis Cardinals Win 10-4 In Busch Stadium.

St. Louis' own Ross Detwiler got knocked out early in the Washington Natinonals' 10-4 loss to the St. Louis Cardinals and the Nats will have to clinch the division at home with three games to go.

Share All sharing options for: Washington Nationals Will Have To Clinch At Home In D.C. If They Do; St. Louis Cardinals Win 10-4 In Busch Stadium.

• Of The Missouri Detwilers: Ross Detwiler was born in St. Louis and the 26-year-old, '07 1st Round pick grew up nearby in Wentzville, Missouri, a city of 29,000+ located in western St. Charles County. Detwiler attended Missouri State University and was drafted with the 6th overall pick by the Washington Nationals in 2007. The Nats' 6'5'' left-hander returned to his home state to make his first career start against the Cardinals this afternoon in the finale of the three-game set in Busch Stadium and he took the mound with a chance to lock down a pennant-clinching win for Washington. The Nationals took over first place in the NL East on May 22nd and they've so far fought Atlanta off all the way. With a win today, or a Braves' loss, the Nationals would have clinched the division. Neither of those things happened. Ross Detwiler threw 81 pitches in 2.1 IP and was knocked out early and the Braves beat the Mets 6-2 in Turner Field. The Nats' magic no. was still at 1 after the loss. Here's how today's game went down...

• No. 21 for No. 28: Jayson Werth doubled for the 21st time this season to lead off the first, then took a base on a fly to center by Bryce Harper, but Ryan Zimmerman failed to bring the runner in, grounding out sharply to his counterpart at third, David Freese before Adam LaRoche K'd swinging to end a 22-pitch inning by Cards' right-hander Lance Lynn with Werth still standing at third. Ross Detwiler missed with a 3-1 fastball outside to Carlos Beltran and issued a one-out walk in the bottom of the first. A 94 mph 2-2 fastball low and away to Matt Holliday got the Cardinals' outfielder swinging for the second out of the inning, and a weak grounder to first from Allen Craig ended an 18-pitch frame. No score after one.

• Lance Lynn got Michael Morse looking with a 94 mph 1-2 fastball that caught the edge of the zone outside, at least in home plate ump Chris Guccione's eyes. Ian Desmond took the same pitch, same speed, location, etc. for a called strike three in an 0-2 count for the third K of the game by the Cards' right-handed starter and Danny Espinosa's weak grounder back to the mound ended a quick eight-pitch top of the inning for Lynn.

• Leadoff Walks Rarely Come Back...: Ross Detwiler walked Yadier Molina and David Freese in back-to-back ABs in the bottom of the second, but he had a double play on a weak roller to second from Daniel Descalso before Danny Espinosa dropped the tailor-made grounder. E:4 instead of a 4-6-3. Bases loaded, no outs, but Det's no-hit bid is intact. "Pesky" Pete Kozma ended even that, however, when he lined to right in the next at bat and drove two runs in. Descalso got thrown out at home by a good five feet on a relay from Werth in right to Espinosa and Kurt Suzuki at the plate. 2-0 Cards. Kozma took third on the play at the plate, and scored one out later when Jon Jay lined one over short for an RBI single. 3-0 Cardinals. Make that 5-0. Detwiler hung a 1-2 slider up inside to Carlos Beltran and the Cards' outfielder crushed it, sending a two-out, two-run home run into the visitor's bullpen in left for a 5-0 lead early in the finale in St. Louis. The 47-pitch inning, when it finally ended, had Detwiler at 65 pitches after two.

• "Pesky" Pete: Lance Lynn got both Kurt Suzuki and Detwiler swinging for the first two outs of the third, and a grounder to short by Jayson Werth ended a 12-pitch, 1-2-3 frame. Davey Johnson stuck with Detwiler in the bottom of the third. The Nats' left-hander struck Yadier Molina out before issuing the fifth walk of the game, putting David Freese on with one down. Freese moved up on a single to right by Daniel Descalso and Davey Johnson went to the pen for Chien-Ming Wang, ending Detwiler's start after 81 pitches and 2.1 IP. Chien-Ming Wang came on in relief and uncorked a wild pitch on his first offering, advancing both runners into scoring position. His second pitch was wild too, and it allowed a run to score. 6-0. "Pesky" Pete Kozma's sac fly to left made it 7-0 Cardinals after three.

• YMTC!!!: Bryce Harper started the "Nats' comeback" with a solo blast to right field on a 94 mph 0-2 two-seamer from Lance Lynn that the Nationals' 19-year-old outfielder absolutely crushed. HR no.22 of 2012 for Harper went over the 375 ft sign on the right field wall, into the Cards' bullpen to make it a 7-1 game and move Harper within two of the All-Time HR leader among teenagers, former Red Sox' slugger Tony Conligliaro (24). Adam LaRoche hit a one-out single back up the middle on another 0-2 fastball from Lynn, then scored when Ian Desmond doubled to left on a first-pitch heater for his 33rd two-base hit. 7-2 ga... make that 7-4! Nats' second baseman Danny Espinosa was first-pitch swinging too and he launched a two-run home to right and GONE!! Espinosa's 17th made it a three-run game after three and a half.

• [mumbles]: "Leadoff Walks Rarely If Ever...": Chien-Ming Wang issued a five-pitch walk to Jon Jay to start the Cards' fourth. Carlos Beltran stepped up in the next at bat and launched a 1-2 sinker from Wang to right for a two-run blast and a 9-4 Cardinals' lead. Two home runs for Beltran today, one from each side of the plate, one into each bullpen. A St. Louis' reliever catches this one as the Cards go back up by five. Allen Craig lined to right one out later, but Wang managed to get the Nats out of the fourth.

• Lynn Settles In: Bryce Harper walked with one down in the top of the fifth, but he was erased on a 5-4-3 DP off Ryan Zimmerman's bat. 9-4 Cardinals after four and a half. Harper tracked down a fly to center off Daniel Descalso's bat and made a running catch after which he collided kinda hard with the wall. After "Pesky" Pete Kozma singled with one down and took second on a sac bunt by Lance Lynn, the Nats turned to the pen again, bringing Craig Stammen on, and three pitches later a fly to right by Jon Jay ended the inning.

• Well, Garcia Looked Nasty! [stresses positives]: Michael Morse lined to right and off the wall with one down in the sixth, but Carlos Beltran played a friendly bounce well and held the Nats' slugger to a single. Ian Desmond got hit with a 2-2 pitch that put two on and ended Lynn's outing. Trevor Rosenthal took over for St. Louis, ending Lynn's day after 5.1 IP. Danny Espinosa moved both runers up with a groundout to short, but Kurt Suzuki's fly to right ended the top of the inning with the score still 9-4 Cardinals. Christian Garcia took over for Washington in the sixth and threw a seven-pitch 1-2-3 inning that ended with Allen Craig taking an 0-2 curve for a called strike three.

• Still 9-4 Cards: Edward Mujica threw an eight-pitch, 1-2-3 top of the seventh for St. Louis. Nats' lefty Zach Duke gave up back-to-back two-out singles by Daniel Descalso and "Pesky" Pete Kozma in the Cards' seventh, but retired Shane Robinson on a groundout to short to end the bottom of the frame. Still 9-4 Cards after seven in St. Louis. Adam LaRoche doubled for the 34th time this season with one down in the Nationals' eighth, took third on a Michael Morse groundout, but was stranded there when Ian Desmond K'd swinging to end the Nats' eighth. Still 9-4 Cards. The Cardinals added to their lead in the bottom of the inning with Carlos Beltran driving in another run with an RBI single after a Jon Jay double. Matt Holliday was the third Cardinal to reach after Ryan Zimmerman threw late to first on a weak grounder to third. Two on, but Zach Duke retired the next three batters to end the eighth.

• No Clinch: Cards' reliever Joe Kelly got a fly to center from Danny Espinosa for the first out of the ninth. Kurt Suzuki grounded weakly enough toward the mound that Yadier Molina handled it. Pinch hitter Chad Tracy grounded out to short. Ballgame. Nats will have to clinch at home... if they can... 10-4 final. 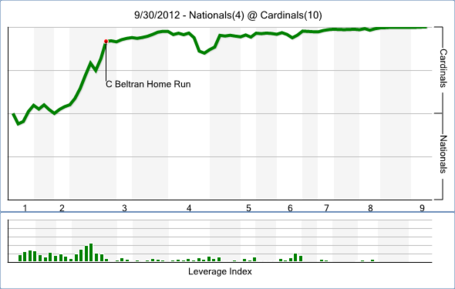