19 Hits And A D.C. Record Six HRs For Washington Nationals In 11-5 Win Over Chicago Cubs.

Share All sharing options for: 19 Hits And A D.C. Record Six HRs For Washington Nationals In 11-5 Win Over Chicago Cubs.

• 20 for 20: Edwin Jackson gave up a two-out single to center by Chicago's first baseman Anthony Rizzo, but he got Cubs' outfielder outfielder Alfonso Soriano to chase an 0-2 slider into the dirt for out no.3 and K no.1 in the first inning of Jackson's 26th start of 2012. Rookie Cubs' lefty Chris Rusin gave up a leadoff single by Jayson Werth on a 3-1 fastball that Washington's leadoff man lined over second and into the center field grass, and Ian Desmond took a 2-1 fastball to center into the stands, over the GEICO sign on the right-center wall and four rows deep for a two-run blast. No.20 on the season for the Nationals' shortstop and a 2-0 lead early for the Nats. Michael Morse and Adam LaRoche hit back-to-back one-out singles off the Cubs' starter after Ryan Zimmerman struck out, but Morse was thrown out by Alfonso Soriano trying to go from first-to-third on LaRoche's hit. "Right Side" Danny Espinosa walked in an eight-pitch, two-out at bat that pushed Rusin up to 28 pitches in what ended up being a 31-pitch frame when Tyler Moore popped out.

• Desmond 2 for 2: Starlin Castro battled Edwin Jackson for ten-pitches in the first at bat of the second, but he had his bat on his shoulder when a 3-2 slider from E-Jax dropped in for a called strike three. Six pitches later, Jackson had two more outs and his second scoreless inning against Chicago. E-Jax had a 3-0 lead to work with after the first at bat of the Nats' second when Jesus Flores hit a 2-2 slider to center over the WB Mason sign and into the Red Porch seats for a solo blast. HR no. 5 of 2012 for the Nats' backstop. Edwin Jackson singled in the next at bat, went to third on a Jayson Werth double and scored on the second straight two-base hit when Ian Desmond flew to center and off the bottom of the center field wall, just feet from his second home run. Two-run double instead, no. 26 of 2012. 5-0 Nats. Chris Rusin's done...

• 1.0 Inning Each: 25-year-old right-hander Jaye Chapman took over for Rusin in the second, making his MLB debut after the 25-year-old Rusin was knocked out of the game, and retiring three of the next four Nats without another run coming in. Still 5-0 Nationals after two. After a 14-pitch, 1-2-3 top of the third, Edwin Jackson had retired seven Cubs in a row and thrown 41 pitches total while collecting three K's. Another right-hander, Blake Parker, took over in the third, the third Cubs' pitcher of the night to enter the game. Chicago's 27-year-old '06 16th Round pick retired the first two batters he faced before Edwin Jackson singled to right to leave the Nats' starter 2 for 2 in 2 ABs. Jayson Werth was 3 for 3 on the night after he lined a 2-2 fastball to center for the Nats' 10th hit in 2.2 innings, but Ian Desmond K'd swinging and angrily tossed his bat as he ended the third.

• LaRoche? Again? And Oppo?: Luis Valbuena and Anthony Rizzo hit back-to-back line drive singles to center off E-Jax in the top of the fourth, collecting the Cubs' second and third hits of the game off the Nats' starter, but Alfonso Soriano grounded back to the mound and into a 1-6-3 DP that left Chicago with a runner on third and two down. Starlin Castro kept the inning alive, however, and drove in the Cubs' first run when he lined to right on a 95 mph 2-2 four-seamer to get the visiting team on the board. 5-1 D.C. Castro got picked off first in the next at bat, and E-Jax was up to 51 pitches after a 10-pitch frame. 24-year-old Cubs' right-hander Rafael Dolis started the fourth, the fourth starter of the night in 4.0 innings. After two quick outs the reliever threw a first-pitch fastball to Adam LaRoche that ended up going out the other way, into the visitor's bullpen in left field for the Nats' first baseman's 26th HR of 2012. 6-1 Nationals. Danny Espinosa hit his 30th double of the year in next at bat, and Tyler Moore hit a towering fly to left for the fourth home run of the game and his 8th of the season to make it 8-1 Nationals after four in the nation's capital.

• Welcome to the Bigs, Christian: A 3-2 slider inside got Wellington Castillo swinging for Edwin Jackson's 4th K in 4.1 IP. Brett Jackson chased an 0-2 slider out of the zone. 5 Ks. A full-count fastball got Darwin Barney swinging and E-Jax had struck out the side on 17 pitches leaving his with 6 K's, 5.0 scoreless and 68 pitches overall. 8-1 Nats. Miguel Socolovich was pitcher no.5 in 5.0 innings tonight for Chicago, and he threw a quick, nine-pitch, 1-2-3 bottom of the inning for Chicago's first 1-2-3 frame. Adrian Cardenas was victimized by another diving two-strike slider by Edwin Jackson, who struck the fourth-straight batter out and his 7th overall in 5.1 IP. David DeJesus was victim no.8. An 86 mph 2-2 slider got E-Jax his fifth straight K, but Luis Valbuena broke up the strikeout streak with a two-out single to center. Anthony Rizzo took a two-out walk on Jackson's 86th pitch of the game, and both Cubs' runners scored when Alfonso Soriano tripled off the wall in left-center on a 3-2 slider from Jackson. 8-3 game. 8-4 on an infield single by Starlin Castro that brought Soriano in. Edwin Jackson exited the game at that point, replaced by the Nats' second pitcher of the night, Christian Garcia who popped Wellington Castillo up on the third of three mid-90's heaters. Garcia's MLB debut.

• Less Walks Please: Nats' lefty Tom Gorzelanny started the seventh on the mound for the Nats. Three walks loaded the bases with two down and brought Anthony Rizzo to the plate for a Lefty vs Lefty matchup in a five-run game... and a 2-2 slider got Gorzelanny a swinging K that left the bases loaded. 30-pitch inning by Gorzo. Still 9-4 D.C. Bryce Harper, who entered the game late, doubled to left in his first at bat, collecting his 20th two-base hit of 2012, then took third on a wild pitch from Cubs' right-hander Alberto Cabrera before scoring on an RBI single by Jayson Werth that made it 10-4 in the bottom of the seventh. Alfonso Soriano hit his 26th HR of 2012 to right field and over the out-of-town scoreboard off Nats' right-hander Ryan Mattheus to make it a 10-5 game after seven and a half. Jeff Beliveau was the Cubs' seventh pitcher of the night and he surrendered the Nats' sixth HR when Adam LaRoche hit his second of the game and 27th of 2012 out to right and over the curly-W wall. 11-5 Nationals. "Right Side" Danny Espinosa doubled to left for his second two-base hit of the game and the Nats' 19th hit. 6 HRs? Apparently that's a franchise record:

• FINISH THEM!!: Nats' lefty Michael Gonzalez got a fly to right from Anthony Recker. ONE!!! Josh Vitters popped to a rangy Danny Espinosa. TWO!! David DeJesus flew to left. Ballgame. Nats win. 11-5 final. No. 83 of 2012.

• Miss The Game? The D.C. Faithful Was Watching... 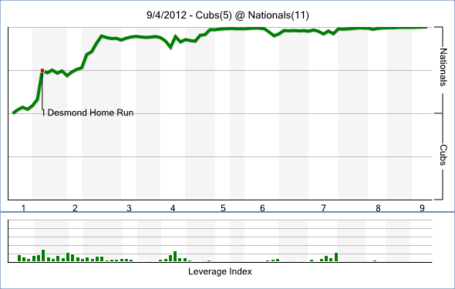