• 11.0 Scoreless: Gio Gonzalez got two groundouts to third and a swinging K to complete the top of the first and his tenth-straight scoreless inning of work on the mound after just eight pitches. Coming off the complete game against St. Louis, the 26-year-old left-hander was looking for win no.18 of 2012 in the 28th start of his first season in D.C. following the trade that brought him to the nation's capital from Oakland last winter. Gonzalez had a 1-0 lead to work with by the time he retook the mound in the second after Roger Bernadina reached on an infield single off Chicago right-hander Chris Volstad, stole second base (15 of 18), took third on a groundout and scored on a two-out single by Adam LaRoche. 1-0 Nats over the Cubs after one.

Gonzalez threw a 95 mph 3-2 fastball up high by Alfonso Soriano for his second-straight K and fourth-straight out to start the game and outs five and six followed on groundouts to second and short by Starlin Castro and Wellington Castillo, respectively, in an 11-pitch top of the second by the Nats' lefty. The Nationals went down in order too, with Cubs' starter Chris Volstad throwing a quick, seven-pitch inning in the bottom of the second. 1-0 Washington after two in D.C...

• Grounder. Desmond. Error?: The Cubs' first runner of the game reached on a throwing error by Nats' shorstop Ian Desmond. Desi bounced a throw to first that Adam LaRoche couldn't handle and put Josh Vitters on to start the third. E:6, Desmond's 14th of 2012. A fly to center by Darwin Barney failed to advance the runner. Gio dropped an 0-2 curve on a completely fooled opposing pitcher for out no.2 and K no.3 and got a fly to right from Joe Mather to retire the Cubs in a 16-pitch frame after which he'd faced just one over the minimum and thrown 3.0 scoreless tonight and 12.0 scoreless overall.

• [CHOMP!!]/RUN HARP!!!: Roger Bernadina took a full-count fastball to straight center and over the 402 ft sign on the center field wall for his fourth home run of 2012. Bryce Harper took the next pitch from Chris Volstad to left for the second straight home run on consecutive pitches. Opp-boppo blast and back-to-back jacks make it 3-0 Nationals. Harper's 16 of 2012. Ryan Zimmerman singled in the next at bat then trotted home when Adam LaRoche hit an opposite field blast for the third home run of the inning and his 4th HR of the series with Chicago. LaRoche 9 for 16 with 5 HR's in his last five games after the homer. Danny Espinosa hit a two-out double (no.32) to stretch his personal hit streak to seven-straight games, but was stranded at the end of a 32-pitch inning that had the Cubs' Volstad at 60 pitches after 3.0 IP.

• 4.0/13.0: Dave Sappelt was the 10th of 11 retired by Gio Gonzalez when the Cubs' left fielder flew out to Roger Bernadina in center to start the fourth. Anthony Rizzo flew to left for out no.2 and the 11th of 12 set down. Alfonso Soriano took the 0-2 fastball upstairs this time up, but chased a 1-2 curve into the dirt for the third out of the fourth and the 4th K in 4.0 scoreless by Gio Gonzalez. 12 of 13 retired. 47 pitches overall after a 12-pitch frame. Bryce Harper walked with one down in the Nationals' fourth, but a 1-6-3 DP off Ryan Zimmerman's bat erased the only runner Volstad let on in the bottom of the fourth.

• 5.0/14.0: Starlin Castro threw to right field. 13 of 14. Home plate ump Larry Vanover was late with the call, but Gio Gonzalez got Wellington Castillo looking with a 3-2 fastball inside. 14 of 15. 5 Ks. Josh Vitter grounded out to short for the third out of the fifth. Grounder. Desmond. Out. This time Desi got it right. 15 of 16 set down. 59 pitches overall after a 12-pitch, 1-2-3 5th by Gio Gonzalez. Adam LaRoche hit a broken bat single in the Nats' fifth to go 3 for 3 tonight, 7 for his last 7 and collect hits in 10 of 17 ABs over the last five games. Michael Morse walked in the next at bat (with Cubs' manager Dale Sveum getting tossed for arguing balls and strikes during the AB) and put two on with no one out and Ian Desmond up. Desmond K'd looking and Espinosa grounded out before Suzuki was walked intentionally for the second time tonight. With the bases loaded, Gio Gonzalez lined out to short, however, leaving it 5-0 Nats after five.

• Bryce. Harper. The New Kid: Darwin Barney hit a first-pitch fastball by a diving Ryan Zimmerman at third for the Cubs' first hit of the night in the sixth. Tony Campana popped up trying to bunt the runner over, and both Joe Mather and Dave Sappelt K'd swinging at 0-2 curves in Gio Gonzalez's 6th scoreless frame. 18 of 20 batters retired. 69 pitches overall after a 10-pitch inning. Cubs' right-hander Michael Bowden took over for Volstad in the bottom of the sixth, and gave up the second home run of the night by Bryce Harper on a first-pitch changeup. The one-out blast by Harper was his 17th of the year, lifting him above Ken Griffey, Jr. on the list of All-Time HRs by a teenager into 3rd overall on the list, behind only Mel Ott (19) and Tony Conigliaro (24). 6-0 Nationals.

• Back-to-Back? Again?: Gio Gonzalez got Anthony Rizzo looking with a full-count fastball that was called strike three in a nine-pitch AB that opened the Cubs' seventh. Alfonso Soriano flew to right for out no.2 on the 10th pitch of the inning, but Starlin Castro and Wellington Castillo hit back-to-back two-out singles for the second and third hits of the night off the Nats' lefty before Josh Vitters K'd swinging at a 2-2 curve to end a 24-pitch inning by Gonzalez. 93 pitches, 9 Ks in 7.0 scoreless. 16.0 straight scoreless overall. Nats' SS Ian Desmond crushed a 3-1 fastball from Cubs' right-hander Blake Parker, hitting the 5th HR of the night and his 21st of 2012 out to center and onto the batter's eye green. 7-0 Nats AND THEN DANNY ESPINOSA CRUSHED a first pitch fastball from Parker and hit the second of back-to-back jacks to left-center and over the W.B. Mason sign into the Red Porch seats. 8-0 Nats on Espinosa's 17th. 9-0 Nats when Zimmerman walked with the bases loaded after a single by Suzuki and one and two-out walks by Chad Tracy and Bryce Harper. Cubs' right-hander Alberto Cabrera walked Zim after Parker had loaded the bases.

• Stammenator: Nats' right-hander Craig Stammen threw a 13-pitch, 1-2-3 8th. Cubs' right-hander Jaye Chapman threw a 1-2-3 bottom of the frame. Stammen came back out for the ninth and gave up a solo home run by Anthony Rizzo that made it 9-1. That's how it ended. 12 HRs in two nights. Unreal. Series finale with Chicago tomorrow. 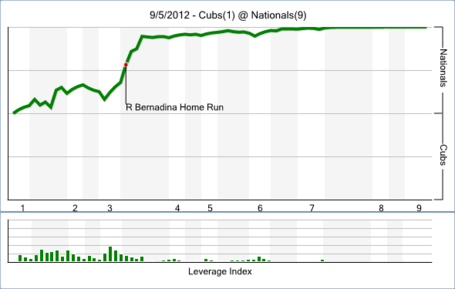