Stephen Strasburg Out Early, Washington Nationals Rally To Tie It But Lose To Miami Marlins 9-7 In Extras

Share All sharing options for: Stephen Strasburg Out Early, Washington Nationals Rally To Tie It But Lose To Miami Marlins 9-7 In Extras

• Opening Paragraphs Misfire: Washington Nationals' right-hander Stephen Strasburg received a nice ovation when he made his way in from the right field bullpen and an even louder one when he took the mound to the strains of the White Stripes "Seven Nation Army" for his last home start of the 2012. The 24-year-old '09 no.1 overall pick had a streak of 18.0-straight scoreless innings going this season against Miami (and 27.0-straight scoreless overall going back to last year) when he faced the Nats' NL East rivals in Miami back on August 28th and got knocked around, giving up nine hits and seven runs, five earned in just 5.0 IP. He entered tonight's game with a (2-1) record, a 1.96 ERA, four walks (1.57 BB/9) and 22 Ks (8.60 K/9) in 23.0 IP against the Marlins this year, however, and as Davey Johnson hinted in the pregame press conference this afternoon, he was likely out to pay the Fish back for jumping all over him last time out. "I know he's fully aware of the bushwacking he got last time," Johnson told reporters, "So, they may not be as comfortable up there, I don't know."

The Marlins' leadoff man looked plenty comfortable. Strasburg walked Bryan Petersen in the first at bat of the game then gave up a one-out single by Fish shortstop Jose Reyes and an RBI double off Ryan Zimmerman's glove at third by Giancarlo Stanton. 1-0 Miami early. A pop to short right by Carlos Lee brought Jose Reyes in from third for a 2-0 lead, but Strasburg struck Greg Dobbs out to end a 23-pitch frame down two runs after a half inning of work...

• TKCHZ: Jayson Werth worked Marlins' right-hander Jacob Turner in a seven-pitch leadoff at bat in the bottom of the first that ended with the Nats' leadoff man sending a single out to his counterpart in right. One out later Ryan Zimmerman stepped in and absolutely crushed a 1-2 two-seamer from Turner, sending a fly ball to left and ten rows back into the stands behind the Exxon Mobile sign on the left field wall. 2-run blast, 2-2 game on Zimmerman's 19th home run of 2012. 12-game hit streak extended. All tied up after one.

• Brantly? Seriously?: Strasburg got a line drive to left from Donovan Solano that went right to Michael Morse, but Marlins' catcher Rob Brantly jumped on the first pitch of the next at bat and sent a towering fly to right that kept carrying as Jayson Werth tracked it. Werth could only watched though as it sailed over the out-of-town scoreboard for the 23-year-old catcher's second major league home run. 3-2 Marlins. A slick play on a sharp grounder to first by Adam LaRoche helped Strasburg out of an 18-pitch second, but he was at 41 pitches overall after 2.0 IP. Jacob Turner needed just five pitches to retire the Nationals in order in the bottom of the frame, after which he was at 26 pitches total.

• Don't Call Him Mike: Giancarlo Stanton dominated in Nats Park back when his name was "Mike" and he's continued to do so after the name change. After doubling in a run in his first at bat, Stanton homered the second time up, taking a 1-0 fastball to right and over the out-of-town scoreboard for a solo blast and a 4-2 Marlins' lead. 2 for 2 with a double (29) and a home run (31) in his first two ABs. Stanton entered tonight's game 26 for 66 (.394/.453/.879) with eight doubles and eight home runs in 17 games in the nation's capital. 28 for 68 after two at bats. Greg Dobbs tucked a two-out ground-rule double just inside the left field line in the next AB and scored from second when Donovan Solano singled to right to make it 5-2 Marlins in the top of the third. A 26-pitch inning for Strasburg had him at 67 pitches overall. And it would be his last inning tonight...

• Zach's Back: Corey Brown pinch hit for Strasburg in the first at bat of the bottom of the third, flying out to center to start the frame. An error on a two-out grounder to short by Bryce Harper put a runner on in front of Ryan Zimmerman, who K'd swinging on a 2-2 curve in the dirt to end the third with the Nats trailing by three, 5-2 Fish. Zach Duke, who had a strong season at Triple-A Syracuse, leading the International League in wins, returned to the mound in the majors for the first time since September 24, 2011 in the top of the fourth. The left-handed veteran issued a one-out walk to Justin Ruggiano, then gave up an RBI triple by Jose Reyes that made it 6-2 Marlins over the Nats. Jacob Turner threw a nine-pitch, 1-2-3 bottom of the frame, and kept the Marlins' four-run lead intact.

• Brother Of Onion: Donovan Solano reached first on a force at second on a grounder to the mound that should have been good for an inning-ending double play. Solano then stole a base a pitch before Zach Duke walked Rob Brantly and the Marlins pulled a double steal in the next at bat to get both runners in scoring position before a groundout to first by Bryan Petersen ended the top of the fifth. Jacob Turner needed 13 pitches to put the bottom of the Nats' order down in the home half of the frame. Zach Duke got help from Ian Desmond, who dove in short left, showing off the range, and caught a bloop single off Giancarlo Stanton's bat for out no. 3 of a 15-pitch, 1-2-3 sixth. Jayson Werth and Bryce Harper went down in order in the Nats' sixth, but Ryan Zimmerman hit a 2-0 curve from Turner off the right field wall for a stand-up triple. Adam LaRoche took a two-out walk to bring Michael Morse to the plate, but a fly to center ended the inning with the Marlins still up by four.

• Enter Zambrano: After the Nats failed to score, El Caballo Carlos Lee started the seventh with a double off Duke, lining one off the left field wall, but three outs later Lee was stranded there as Zach Duke completed a scoreless 16-pitch frame. Still 6-2 Fish. Carlos Zambrano took over for the Marlins in the bottom of the seventh and promptly surrendered a leadoff single by Ian Desmond and an RBI double to the left-center gap by Danny Espinosa that cut into the Marlins' lead. 6-3 Fish after Espinosa's 33rd double of 2012. Kurt Suzuki followed with the second two-base hit, splitting the right-center gap this time and Espinosa scored to make it a two-run game. 6-4 Marlins. Make that 6-5. Ryan Webb came on to face Steve Lombardozzi, who singles to second, sliding in headfirst at first, and Donovan Solano threw it by Carlos Lee allowing Suzuki to score from third. 6-5. Jayson Werth grounded into a force at second for out no.1, after which Ozzie Guillen went to the pen again. Mike Dunn vs Bryce Harper. Lefty vs Lefty. Swinging K on a 96 mph 2-2 heater. Two down. Ryan Zimmerman? Force at second. One-run game after seven.

• Fireworks!!: Ryan Mattheus took over on the mound in the eighth, giving up a leadoff double by former Nats' outfielder Austin Kearns. Bryan Petersen K'd swinging for the first out of the inning, but Justin Ruggiano reached safely on a grounder to short neither Zimmerman or Desmond could get to. A groundout to second by Jose Reyes put both runners in scoring position for Giancarlo Stanton who took a 2-2 fastball inside for a called strike three. FIREWORKS!! 6-5 Fish after seven and a half. Marlins' right-hander A.J. Ramos retired Adam LaRoche for the first out of the Nats' eighth, but Michael Morse got hold of a 96 mph 1-2 fastball and sent an opposite field home run out over the GEICO sign on the right-center wall. Tie game on Morse's 13th. 6-6 in the 8th. Ian Desmond followed with a single through short, but Danny Espinosa K'd swinging for out no.2 and Suzuki flew out to left to end the eighth.

• Druuuuuuu!!!!: Drew Storen popped Carlos Lee up to left to start the ninth. Greg Dobbs hit a one-out single by a diving Danny Espinosa, Donovan Solano collected the second straight hit, sending a chopper by second into right and there were runners on the corners with one down. Rob Brantly lined to center on a first pitch fastball and Bryce Harper caught it coming in and fired a throw home to Kurt Suzuki who caught it and tagged Dobbs for the inning-ending 8-3 DP. Silly, Marlins. Chad Gaudin took over for the Fish. Jayson Werth worked a one-out walk in front of Bryce Harper. The Nats' 19-year-old outfielder lined out to center for out no.2 and Ryan Zimmerman K'd swinging to send it to extras.

• Free Baseball: Tyler Clippard's turn. Adam LaRoche pulled a pop by Donnie Murpy out of the stands for the first out of the tenth but Bryan Petersen singled with one down. A single through short by Justin Ruggiano put runners on first and third with one down for the second straight inning, but this time they cashed two in when Jose Reyes lined to center and by a diving Bryce Harper for a two-run triple. 8-6 Fish. Clippard walked Stanton intentionally this time. A sac fly to left made it a 3-run game. 9-6 Fish after nine and a half. Steve Cishek on for Miami. Adam LaRoche doubled to start the Nationals' tenth and scored when Michael Morse lined one off the second base ump and into center. 9-7 and Ian Desmond doubled off the out-of-town scoreboard to put runners on second and third with no outs. Danny Espinosa K'd swinging. One unproductive out. Kurt Suzuki... walked. Bases loaded. Roger "The Shark" Bernadina stepped in with one down and K'd swinging on three pitches. Two outs. Jayson Werth? Swinging K. Ballgame. 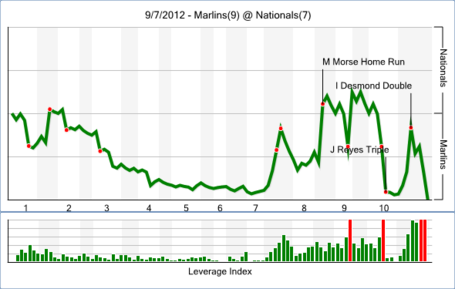