Washington Nationals Rally To Tie It In Bottom Of The 9th, Beat Miami Marlins 7-6 On Corey Brown Walk-Off Single In 10th

Share All sharing options for: Washington Nationals Rally To Tie It In Bottom Of The 9th, Beat Miami Marlins 7-6 On Corey Brown Walk-Off Single In 10th

• Giancarlo Stanton Pwns D.C.: Washington Nationals' left-hander Gio Gonzalez did not like home plate umpire Todd Tichenor's strike zone in the first inning of this afternoon's game with the Miami Marlins, and the 26-year-old left-hander got ejected for arguing balls and strikes with the ump. Luckily for Davey Johnson and the Nats' bullpen, Gonzalez wasn't starting. He got tossed for arguing from the dugout on fellow 26-year-old left-hander Ross Detwiler's behalf after Detwiler surrendered two first innings home runs when he fell behind in the count to both leadoff man Gorkys Hernandez and Marlins' monster Giancarlo Stanton. Hernandez's home run, which came on a 95 mph full-count fastball from Detwiler, was a bit of a surprise. It was the just the second home run of the year for the 25-year-old outfielder and only his third major league HR in 321 career plate appearances. Stanton's bomb? Pretty much to be expected. After going 2 for 5 with a double and home run in last night's game, the 22-year-old Marlins' right fielder entered this afternoon's affair with 28 hits in 71 career AB's in Nats Park, a .394/.457/.901 line, nine doubles and nine home runs in 18 games. Stanton's 10th career dinger in the nation's capital, and his 32nd this season, came on a 3-1 sinker and landed 10-15 rows up in the left field stands. 2-0 Marlins after a half in Nationals Park.

• Teh Jesus Goes Yard: The Marlins added to their lead in the second. Detwiler gave up a one-out double by Donnie Murphy and a two-out walk to Gorkys Hernandez before Marlins' second baseman Donovan Solano lined to left for an RBI single that made it 3-1 Marlins early. After a 25-pitch first, Ross Detwiler needed another 23 to get through the second. Marlins' starter Mark Buehrle walked Ryan Zimmerman in the first, but held the Nationals' hitless through two. After Detwiler gave up a double in the third, but kept Miami from adding to the lead in a 13-pitch frame, Jesus Flores led off the Nationals' half with a solo blast to left that got Washington on the board, down 3-1 to the Fish.

• "We're Going Streaking!!": Detwiler started the fourth at 62 pitches and ended it ten-pitches later at 71 overall when he completed his first 1-2-3 frame of the day by striking Gorkys Hernandez out looking with an 84 mph 2-2 change. Ryan Zimmerman singled to start the Nationals' fourth and two outs later took second on an Ian Desmond single before scoring on an RBI double by Danny Espinosa that made it a 3-2 Miami after four in the nation's capital. Zim's hit extended his current hit streak to 13 games. Espinosa's hit gave him hits in 10-straight.

• TICHENOR!!!: Ross Detwiler just "missed" with a 3-2 fastball to Donovan Solano, issuing a leadoff walk to start the top of the fifth. Jose Reyes ran into his own bunt and was punched out by the home plate ump, an out which is apparently credited to the catcher. Ryan Zimmerman got all the credit for snagging a low liner off Giancarlo Stanton's bat for out no.2, but Detwiler grew increasingly frustrated with Todd Tichenor's zone as he issued a two-out walk to Carlos Lee. The Nats' lefty got the groundout he wanted from Justin Ruggiano in the next at bat, but a rare fielding error on Adam LaRoche allowed the first walk of the inning to come around and make it 4-2 Marlins. Michael Morse misplayed/made an ill-advised dive on a line drive to left off John Buck's bat, allowing Carlos Lee to score, but the Marlins ran themselves out of the inning after the fifth run had crossed the plate when Buck tried for second and Ruggiano broke for home only to get thrown out. 5-2 after four and a half.

• #RUNHARP!!!: After crushing a 3-1 change from Mark Buehrle and sending it foul of the right field pole before grounding out to end the third, Bryce Harper straightened a 1-0 cutter out the next time up in the fifth, hitting the Marlins' left-hander's offering to right field and three rows back in the second deck above the out-of-town scoreboard for his 18th HR of 2012. 5-3 Marlins. The home run got Harper within one of the New York Giants' Mel Ott on the list of All-Time HR's by a teenager and tied Ott for the single season mark. 5-3 Fish after five. Craig Stammen replaced Ross Detwiler in the sixth and threw a 12-pitch, 1-2-3 top of the inning. Mark Buehrle was at 102 pitches total with a two-run lead after a 10-pitch bottom of the inning.

• E:5 = 6-3: With a runner on third and one down after Donovan Solano doubled and took third on a fly to center by Jose Reyes, Craig Stammen got Giancarlo Stanton swinging at a 3-2 slider for out no.2. El Caballo Carlos Lee walked with two down, to put runners on the corners, but Stammen got the groundout he wanted from Justin Ruggiano only to have Ryan Zimmerman bounce a throw to first that Adam LaRoche couldn't pick. E:5 and a run scores to make it 6-3. After an 11-pitch, 1-2-3 bottom of the seventh, Mark Buehrle was at 113 pitches total with a three-run lead.

• TKCHZ: Christian Garcia struck John Buck out with a nasty 2-2 slider for the first out of the eighth. An 0-2 change got Donnie Murphy swinging for out and K no.2 and a fly to left on a first pitch fastball to pinch hitter Bryan Petersen ended a nine-pitch 1-2-3 frame by the Nationals' right-handed reliever. A.J. Ramos took over for Buehrle in the bottom of the eighth and hit Bryce Harper to put the leadoff runner on. Ryan Zimmerma---- THE KIDS CALL HIM ZIM!! THE KIDS CALL HIM ZIM!!! Ryan Zimmerman crushed a 2-0 fastball from Ramos and sent a long fly ball to left and over the visitor's bullpen for a two-run home run that got the Nats within one. 6-5 Marlins after Zim's 20th HR. Michael Morse singled in the next at bat to chase Ramos. Mike Dunn came on to face Adam LaRoche while Eury Perez came on to run. LaRoche held up on a close 2-2 pitch to work the count full and then singled through the right side of the infield to end Dunn's outing. 2 on, 0 outs. Ryan Webb vs Ian Desmond. Desmond grounded to first and Lee took the force at second for out no.1. Danny Espinosa fouled off three 1-2 pitches then took a two-seamer inside for a called strike three and out no.2. The Marlins walked Chad Tracy intentionally to get to Roger Bernadina. Bases loaded, two outs. The Shark took a 1-2 fastball inside for ball two, then K'd swinging to leave them loaded.

• Another Rally?: Tyler Clippard battled Gorkys Hernandez for ten pitches before striking him out with a changeup. Donovan Solano took a 2-2 fastball for a called strike three. Jose Reyes singled with two down, but Clippard got Giancarlo Stanton swinging with a 1-2 change to end a 24-pitch inning. Heath Bell came out to close it out for the Marlins... when a violent storm hit Nats Park. Rain Delay...Over two hours later, [2:33 to be exact] they retook the field to play the bottom of the ninth. Jayson Werth vs Heath Bell. Full count... and WERTH GOES YARD!! Into the Red Porch Seats and two and a half hours later it's a tie game 6-6 in the ninth. Werth's 5th HR of the year. Bryce Harper K'd swinging for out no.1. Zim K'd swinging for out no.2. Tyler Moore K'd swinging. On to the tenth...

• DRUUUU!!!: Drew Storen came out for the top of the tenth with a swinging K, getting Carlos Lee to chase an 0-2 slider. A full-count slider got Justin Ruggiano on a check-swing strike three. Another 2-2 slider got John Buck swinging and the Nationals got another chance for a walk-off winner. Chad Gaudin took over for Miami against Adam LaRoche, who lined a leadoff single to right to start the Nationals' tenth. Ian Desmond followed with a second single to right that sent LaRoche around from first-to-third™. An intentional walk loaded the bases for Kurt Suzuki. The Nats' catcher hit into a force at home, 7-2 with the five-man infield. Corey Brown flew to right to win it!! RBI Single! Ballgame. 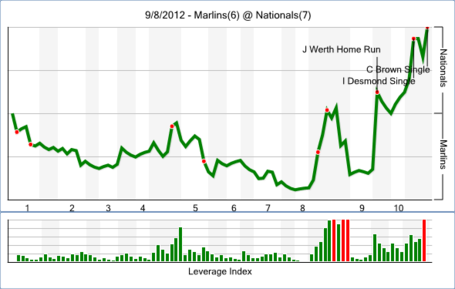