• Happy Birthday, E-Jax?: This probably isn't how Edwin Jackson imagined his 29th birthday or his 27th start in a Nationals uniform going, though it might have been expected considering his history against Miami. The 10-year-veteran out of Neu-Ulm, West Germany entered today's game (1-5) in seven games (six starts) against the Marlins, with 18 walks (4.91 BB/9), 23 Ks (6.27 K/9), a 6.00 ERA, 1.58 WHIP and .270 BAA in 33.0 career IP vs the Fish. Jackson wouldn't make it out of the fifth this afternoon, giving up nine hits, two walks and six runs, all earned, while Marlins' starter Ricky Nolasco continued a streak of scoreless innings pitched against Washington that stretched back through two starts to August 5th and held the Nationals' batters hitless through 4.1 IP while the Marlins built up a big lead...

• K, BB, 6-4-3: Washington Nationals' right-hander Edwin Jackson missed inside with back-to-back fastballs to Justin Ruggiano, going from 2-2 to 3-2 and then walking the Miami Marlins' outfielder with one down, but a 6-4-3 DP off of Jose Reyes' bat ended a 15-pitch top of the first in the series and season finale with the Nationals' NL East rivals from Miami. Fish starter Ricky Nolasco missed with four of the five pitches he threw to Bryce Harper in the bottom of the inning, putting the 19-year-old Nats' outfielder on with one out, but Jayson Werth did the same thing as Reyes, grounding into a 6-4-3 DP that ended an 11-pitch bottom of the inning.

• Sun vs Harper: In the top of the second, Gregg Dobbs and Donovan Solano hit back-to-back two-out singles by Danny Espinosa, who was playing short today with Ian Desmond getting a day off. The Marlins scored their first run of the game when the third straight two-out hit, this one by Rob Brantly, got by a diving Steve Lombardozzi at second and the Fish added two more when a Ricky Nolasco fly to center dropped just to the left of Nats' center fielder Bryce Harper when the outfielder lost it in the sun and flat missed the ball. 3-0 Marlins early. 25-pitch inning for E-Jax, who was at 40 after two. After driving in two runs to give himself a three-run lead, Ricky Nolasco returned to the mound and threw a 14-pitch, 1-2-3 second, retiring Adam LaRoche, Michael Morse and Danny Espinosa in order.

• Hitless And Scoreless vs Nolasco Since 8/5: The Marlins' third started with Justin Ruggiano singling to right on a first-pitch fastball from E-Jax. One out later, a HBP on Giancarlo Stanton put two runners on. A fly to right by Carlos Lee allowed Ruggiano to take third, but a rangy play by Lombardozzi on a sharp grounder to second by Greg Dobbs got Edwin Jackson out of the inning after just 10 pitches. Ricky Nolasco threw 14 pitches in a 1-2-3 bottom of the third, after which he'd faced just nine batters, giving up just a walk in the first, but no hits through three and completing his 16th scoreless against the Nationals going back to the 4th inning of an August 5th start against the Nats. In one start vs Washington since that, on August 28th in Miami, Nolasco threw a complete game shutout against the Nationals.

• 4-0, 5-0...: Edwin Jackson issued his second walk of the game to Donovan Solano in the first at bat of the Marlins' fourth. Two outs later, the leadoff walk scored when Bryan Petersen lined an 0-1 slider to center to make it 4-0 Fish. Justin Ruggiano followed with an RBI double and it was 5-0 Marlins before E-Jax escaped the top of the frame. The 20-pitch inning had Jackson at 70 pitches total thru 4.0. Ricky Nolasco was at 48 pitches overall after a nine-pitch fourth, and he still hadn't allowed a hit after Steve Lombardozzi, Bryce Harper and Jayson Werth went down in order in the Nationals' half of the inning. 17.0 scoreless vs the Nats overall, 4.0 scoreless and hitless today.

• No No-No: Giancarlo Stanton singled to start the fifth then swiped second on E-Jax and Nats' catcher Kurt Suzuki. Stanton took third on a one-out single by Greg Dobbs, and scored on a sac fly to right by Solano that made it 6-0 Marlins with two down in the fifth and ended Jackson's outing after 4.2 IP. Ricky Nolasco's no-hit bid ended after 4.1 IP when Michael Morse ripped a one-out single through short, but Nolasco stretched his scoreless innings streak to 18.0 when he got a 3-6-1 DP out of Chad Tracy to end the Nationals' fifth after just nine pitches.

• 19.0 Scoreless: Tom Gorzelanny walked Ricky Nolasco on four pitches in the top of the sixth, but retired the next three batters in order in a 12-pitch frame. Danny Espinosa, Kurt Suzuki and pinch hitter Corey Brown went down in order in another nine-pitch inning by Nolasco that stretched his scoreless innings streak against the Nats to 19.0. Christian Garcia took over for Washington in the seventh and gave up Giancarlo Stanton's 33rd HR of 2012 and his 10th in 20 games and 90 career plate appearances in Nationals Park on the first pitch of the seventh. 7-0 Fish. Greg Dobbs singled off Garcia with two down and then took third on a two-out, ground-rule double to center off Rob Brantly's bat, but Garcia gout out of the frame without further damage. 7-0 Marlins after six and half. Jayson Werth reached on error with two down in the Nats' seventh, hitting a grounder to third Greg Dobbs couldn't handle, but Adam LaRoche K'd swinging to end Nolasco's 20th scoreless frame against the Nats.

• Sun vs Stanton: Michael Gonzalez gave up a leadoff single by Bryan Petersen then threw a wild pitch that allowed the Marlins' outfielder to take second. A four-pitch walk to Jose Reyes followed one out later, Gonzalez struck out Giancarlo Stanton for out no.2 but gave up an RBI single by El Caballo Carlos Lee that made it 8-0 Marlins after seven and a half in D.C. Michael Morse K'd swinging at a pitch in the dirt for out no.1 of the Nats' eighth. Chad Tracy collected the Nats' second hit of the game when Giancarlo Stanton lost a fly to right in the sun and let it fall in on the track. Danny Espinosa battled after falling behind 0-2, but flew out to left for the second out of the inning and Kurt Suzuki grounded out to short to end the eighth. 21.0 scoreless for Nolasco vs the Nats.

• Comeback?: Ryan Mattheus threw an eight-pitch, 1-2-3 top of the ninth, after which Ricky Nolasco returned to the mound and retired Eury Perez on a grounder back to the mound for out no.1, but Steve Lombardozzi singled with one down for just the third hit off Nolasco this afternoon. Bryce Harper sliced on an opposite field single to left in the next at bat to put two on in front of The Shark, Roger Bernadina. Bernadina popped to center for out no.2 and Mark DeRosa grounded out to third as Ricky Nolasco completed his second-straight complete game shutout against the Nationals. Season series ends tied at 9-9. 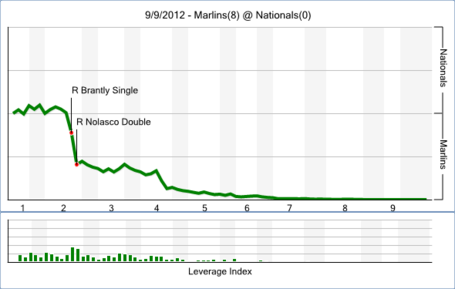