Better Understanding Pitching against the Nationals: An Introduction

This series offers a preseason look at pitching and pitching evaluation in Major League Baseball. My goal is to present information that helps our community in evaluating pitching performance throughout the 2013 season.

Share All sharing options for: Better Understanding Pitching against the Nationals: An Introduction

Hello, Federal Baseball! My name is Garrett Hooe (think Santa's chant for proper pronunciation) and I am privileged to write about pitching and pitching evaluation for Patrick and this community throughout the year. Hopefully, I can live up to the reputation of Patrick, Doghouse, and the many FanPost authors that make Federal Baseball great.

By way of introduction, I attended my first Nationals game on April 16, 2005 -- their second contest at RFK. Lovely place. Anyway, John Patterson faced off against Russ Ortiz, and after 9 innings, the Nationals had their second victory in a row, outscoring the Diamondbacks 9-3. Vinny Castillia was hitting the walls harder than Jeff Gordon turning right. Patterson was dealing. And the District was rocking at a baseball game for the first time in about 34 years.

I've been attending games, watching on television, listening on the radio, attempting to do both on my smartphone only to curse my mobile provider, and following Gameday ever since.

Since joining Federal Baseball in late April last year as Big Oil (a relic of fantasy leagues' past), I've enjoyed following the team even more thanks to the insightful comments and observations from the commentariat. So, it's time to (try to) pay it back.

The legendary Christy Mathewson once stated, "anybody's best pitch is the one the batters ain't hitting that day." Of course, if you can't hit, you can't score -- and you can't win. Therefore, understanding the strengths and weaknesses of a pitcher has been critical since "outs" were referred to as "aces," an interesting parallel to the modern practice of labeling as aces pitchers who consistently rack up outs and prevent runs.

During the regular season, I'll offer my analysis of the starter opposing the Nationals. Using news reports, interviews, statistical analysis, and other sources, I think we can better understand the pitcher the Nats face each night. More importantly, I hope it will make the viewing/listening experience more enjoyable.

Before the season kicks off, I'll look at both the mental and physical aspects of pitching evaluation over a series of articles. These will form the foundation for in-season reports. Want to know about Game Theory's application to pitching, FIP, rate stats, or Pitchf/x? Be sure to check back. I'll cover these items and others the community may have interest in. And if there is a particular concept you'd like to see, just ask.

I look forward to writing for the community.

Pitching is awesome (courtesy the San Francisco Chronicle via Notgraphs, click to enlarge): 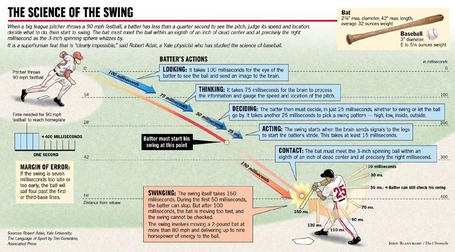