This article is the first part of a pre-season series which will look at pitching and pitching evaluation in Major League Baseball. Here, in order to form a foundation for future analysis, we look at factors unrelated to a pitcher's physical performance.

So, Rafael Soriano? A.J. Cole? Mike Rizzo makes every visit to MLB Trade Rumors an anxious one; until the story banner loads, I've got no idea what to expect.

Anyway, for my pre-season pieces, I've broken pitching down into two very broad categories: physical and non-physical aspects of the discipline. Although somewhat arbitrary, it's a relatively clear point of separation. Additionally, if my planning is at all reliable, it breaks down relatively equally content-wise.

This first PDB (a (probably uncreative) nod to the President's Daily Brief) looks at some non-physical aspects of the position, detailing factors that, although not necessarily related to a pitcher actually throwing the ball, affect our understanding of pitching performance.

One of Yogi Berra's more famous musings is his observation that "ninety percent of [baseball] is half-mental." Mathematical gymnastics aside, Berra underscores what baseball observers have long understood: much of the game is determined by things that have little to do with one's own physical performance.

As best I can tell, the concept of pitching was first codified in the 1845 Rules and Regulations of the Knickerbocker Base Ball Club; the ninth rule requires that "the ball must be pitched, not thrown, for the bat." Without dwelling excessively on the point, pitching either starts, continues, or ends an at-bat, inning, game, series, or season. But there are a tremendous number of variables - some measurable, some immeasurable, some unmeasurable - that influence the result of any one traverse of the 60'6" distance between the rubber and the rear point of home plate.

Enough intro. Here are some of the more salient non-physical aspects of pitching that I think are important.

A. What Non-Physical Things Pitchers Can and Can't Control

Joe "Spanky" McFarland's Coaching Pitchers details strategies for educating pitchers. Inside, McFarland lists what pitchers can and can't control, some of which I've included below. Many of the following are logical to even the most casual baseball fan, so I will only add my observations where appropriate.

Although wins, losses, and Earned Run Average were long the gold standard for many in the industry, a pitcher can never control how many runs his team scores for him (unless you're Stephen Strasburg, of course), nor can he control the defense behind him. So why should we evaluate a pitcher as if he can control these things? Wins, losses and ERA are not high quality statistics if the goal is to measure pitcher talent. They are descriptive, but because they lack the relative precision of other metrics, they are not the best.

Over at Fangraphs, Jeff Sullivan used Pitchf/x measurements (which I will cover later in the series) to write two great articles on the worst called balls and strikes of the year. In case you don't want to click over, here are the .gif's:

These .gif's demonstrate the volatility of the strike zone when humans are allowed to interpret it. Are umpires and catchers related to the pitcher's own ability to throw the ball effectively? Not really. But each can be the difference between victory and defeat.

If the last .gif left any doubt, Rays catcher Jose Molina is pretty unreal when it comes to receiving skill. This area of study is still developing and has been detailed extensively elsewhere if you're interested in reading more.

Likewise, umpiring is as dynamic today as it was 100 years ago. Christy Mathewson recounts in his book Pitching in a Pinch that "[m]ost umpires declare they have off days just like players, when they know that they are making mistakes and cannot help it. If a pitcher of Mordecai Brown's kind, who depends largely on his control for effectiveness, happens to run up against an umpire with a bad day, he might just as well go back to the bench."

In any case, the point to take away is that catchers and umpires can affect a pitcher's performance, sometimes both at once. No huge shocker, of course, but a relevant thing to keep in mind when attempting to competently explain pitcher performance.

Preparation can take different forms, not always in the classic "pitcher-in-the-bowels-of-a-stadium-reviewing-tape" form.

For example, in Nolan Ryan's Pitcher's Bible, Ryan admits that

[u]nlike a lot of pitchers, I don't keep a written book on hitters; I work more on recollection. Is he a fastball hitter? Does he wait on the curve? Will he swing at the first pitch? All this information is filed away in my memory, ready and waiting to be put to the test of competition.

On the opposite side of the spectrum, pitchers like Brian Bannister have embraced statistical analysis and new technology like Pitchf/x to survive (for a limited time, at least) with a sub-90MPH fastball. More established pitchers rely on newer technology and understandings of the discipline, too:

Take Rays left-hander David Price, for example. He's young, sharp and attended Vanderbilt University on an academic scholarship. He has said several times that WHIP (walks plus hits per inning pitched) is his favorite pitching stat because it best reflects dominance. He even made a relatively sabermetrics-minded argument about how ERA doesn't truly represent a pitcher's performance because he doesn't fully control it.

Regardless of how individual pitchers prepare for hitters, there are several common threads.

Ryan attributes his long and successful career to a positive attitude and ability to focus intensely on his objectives, pitch by pitch ("I can't let up -- even for a second."). He also believed that he had an edge over his peers because he had no fear about pitching inside.

Having a "pitch inside" mindset can be a useful example to show how preparation may or may not affect performance. The below chart shows that, as runs per game increased during the '90's and early 2000s, so too did hit batsmen. 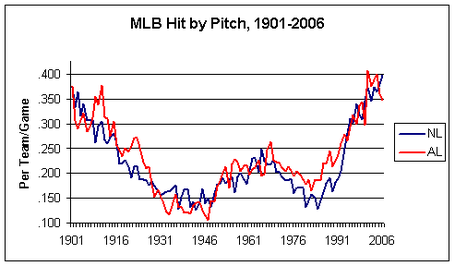 Do these numbers indicate that pitchers are preparing to attack (and actually attacking) hitters differently given the depressed scoring environment? It's impossible to say with certainty - warning: this will be a recurring theme - but to the extent the answer is yes, there may be support for the proposition that league-wide trends can affect a pitcher's preparation.

So, preparation may include a pitcher reviewing his own ability, the ability of his opponent, and possibly even league-wide trends.

Mere planning won't always do, however, and this requires that pitchers also...

Similar to preparation, this means the willingness and creativity to pitch confidently even when your stuff isn't at its best.

Ryan believed that his offerings were "horrendous" while warming up before he threw his first no-hitter with the Angels, and he even struggled with control early (something Ryan admits he was also famous for). But he "persisted until I found my rhythm and got into a good groove. By the end of the night I was throwing as well as I ever had."

The same holds true in today's game - the light went on for CC Sabathia before the fourth inning of his third start this past year, thanks to help from his pitching coach.

So, it is critical for a pitch to recognize when he must adjust his strategy, whether for how the game is being called or for how he is pitching. Adjustments can be simple - evaluating warm up pitches to see how a slider is breaking, for example - to more difficult - like trying to find Tim Tschida's strike zone.

A pitcher's batted ball profile includes ground balls, line drives, and fly balls. Voros McCracken -- the pioneer of Defense Independent Pitching Statistics (DIPS) -- believed in his seminal 2001 study of DIPS that "major-league pitchers don't appear to have the ability to prevent hits on balls in play."

Hits on balls in play come from three main sources: line drives, ground balls, and fly balls. Each of these three result in hits at different rates - a line drive is most likely to result in a hit, while a fly ball is least likely to do the same.

Below are the figures for Batting Average on Balls in Play (BABIP, which shows how often a batted ball results in a hit) for 2012:

Tom Tippett put McCracken's assertion to the test, concluding in part that:

1. Pitchers have more influence over in-play hit rates than McCracken suggested. In fact, some pitchers (like Charlie Hough and Jamie Moyer) owe much of their careers to the ability to excel in this respect.

2. Their influence over in-play hit rates is weaker than their influence over walk and strikeout rates. The most successful pitchers in history have saved only a few hits per season on balls in play, when compared with the league or team average. That seems less impressive than it really is, because the league average is such a high standard. Compared to a replacement-level pitcher, the savings are much greater.

Although DIPS remains alive and well, there is some consensus that pitchers may also control - to a small extent - DIPS inputs, such as home runs.

DIPS and batted ball profiles are probably more out of a pitcher's control than they are within his control, and it's important to look at a pitcher's past performance when determining if his batted ball profile for a game or month was wacky. From this point, we could evaluate whether the hurler was doing something physically that led to the unusual numbers.

A pitcher's velocity is going to be limited by many strictly physical factors, although no pitcher can throw faster than their body will allow. Unless, of course, you happen to pitch at Kauffman Stadium. Regardless, keep in mind that radar guns at various stadiums will measure velocity differently. This will be detailed further during the Pitchf/x series.

The above non-physical factors can affect a pitcher's performance in some fashion over the course of a single at-bat, an entire career, or at different points in between. Despite some things being obvious, it helps to highlight the shortcomings of certain stats, like wins, losses, and ERA, or point out that relying only on a few correlating pieces of information may not reveal a comprehensive picture.

One constant throughout this series and my evaluations will be dealing with these limitations and the uncertainty associated with using them to predict future performance. However, I think that by marshaling different methods of evaluation, we can both truthfully evaluate what happened and mitigate the dangers (as well as is possible) when anticipating the future.

What other non-physical factors do you think impact pitching performance?

Part II of the series resumes with a second non-physical characteristic: game theory and its impact on the pitcher/batter matchup.