Will Nationals' Manager Search Result In A Familiar Face On The Bench Again?

Washington Nationals' GM Mike Rizzo has shown a tendency to promote from within. Does that work in Randy Knorr's favor? Will the Nats turn to a new voice after a disappointing season in the nation's capital or try to pick up where they left off with a familiar face on the bench...

Share All sharing options for: Will Nationals' Manager Search Result In A Familiar Face On The Bench Again?

Jim Riggleman is, "widely considered one of the brightest baseball minds in the game," the Washington Nationals wrote in a press release when they named Riggleman Manny Acta's bench coach in October of 2008. The previous season in Seattle, Riggleman, who had already managed with the San Diego Padres and Chicago Cubs, and worked as a coach under the likes of Tony LaRussa, Jerry Manuel and Jim Tracy, had replaced John McLaren on the bench when the Mariners fired McLaren mid-season. When Riggleman became Washington's bench coach, replacing Pat Corrales in the role, he was still under consideration for the full-time gig in Seattle, but didn't get the job.

"'He's a guy with nine seasons of experience as a Major League manager, and he's a guy that we -- I -- respect greatly.'" - Mike Rizzo on Jim Riggleman to MLB.com's Bill Ladson

Riggleman served as Manny Acta's bench coach. When Acta's Nats went into the 2009 All-Star Break 26-61 in the manager's third season as skipper, the Nationals made the decision to replace him with Riggleman. "'He's a baseball guy from the old school,'" then-"acting" GM Mike Rizzo told MLB.com's Bill Ladson and Pete Kerzel that July. "'He's a guy with nine seasons of experience as a Major League manager, and he's a guy that we -- I -- respect greatly." Rizzo said then that Riggleman would serve on an interim basis and definitely be considered for the full-time job after they conducted a thorough search.

The Nationals' search for a manager for the 2010 season began in earnest in mid-October of '09. "'We are [getting ready] to make phone calls,'" Rizzo told MLB.com's Bill Ladson, "'cutting down a long list into a smaller list and discussing with specific people about the managerial job.'" The Nationals decided to stick with the in-house candidate, ultimately naming Jim Riggleman to the position on a full-time basis in mid-November.

"He did what I thought was a masterful job in very trying circumstances, he gave us a sense of balance, not only in the dugout, but also in the clubhouse." - Mike Rizzo on Jim Riggleman in the fall of 2009

"We went through a disappointing season in 2009," Rizzo told reporters after announcing Riggleman was the choice. "Halfway through the season we turned to Jim Riggleman for some stability, to right the ship, and he did what I thought was a masterful job in very trying circumstances, he gave us a sense of balance, not only in the dugout, but also in the clubhouse." The Nationals conducted an extensive search, Rizzo explained, "and came back to the realization that the best guy for the job we had in-house in Jim Riggleman."

Riggleman led the Nationals to a 69-93 record in 2010, and had them at 38-37 when he abruptly resigned in late June of 2011. Rizzo turned to Davey Johnson as Riggleman's replacement after hiring Johnson as a "senior advisor" upon being named the full-time GM in the fall of 2009.

Johnson signed a three-year consulting deal and agreed to help the team search for the full-time replacement after the season ended. The then-68-year-old skipper explained in an interview on ESPN980's The Sports Fix, however, that he thought he was the right man for the job for the immediate future, but after that he wasn't sure.

"I think the best thing in a system is ideally you develop some future managers and future big league coaches from within the system, because they know the talent and they kind of continue the way you play the game of baseball." - Davey Johnson in 2012 on his eventual successor on ESPN980

"I think there's some really good baseball people in our system," Johnson said, "and I think the best thing in a system is ideally you develop some future managers and future big league coaches from within the system, because they know the talent and they kind of continue the way you play the game of baseball." Johnson led the Nationals to the postseason in 2012, and returned for one last run in 2013, but as a disappointing season wore down, and talk of his successor picked up, he said he still thought the ideal manager is someone who worked in and was familiar with the organization.

Washington Post reporter Adam Kilgore wrote, in a March 2012 article on Randy Knorr being named Johnson's bench coach, that Knorr, who had managed at every level in the Nationals' organization, had been brought on with the knowledge that he could be Johnson's eventual successor. "When jobs [have] opened, Rizzo has preferred to fill from within, promoting organizational stability and identity," the WaPost writer noted at the time.

Knorr, third base coach Bo Porter and first base coach Trent Jewett were considered potential replacements when Johnson did step aside. Porter left to become the Houston Astros' manager. Knorr's rumored to be the top in-house candidate as the Nationals' search for their sixth skipper begins. Jewett is in the running. Mike Rizzo told ESPN980's Kevin Sheehan and Thom Loverro last week that the process was starting to unfold.

"We've done a lot of the vetting process," Rizzo said. "We started off with an extremely large list of good candidates and we're in the process now of whittling them down to a manageable few that we'll begin to call to other teams for permission to speak to these guys and to interview them."

Will the Nationals' GM once again decide that the in-house candidate is the right one? He talked about Knorr as a candidate in an interview with reporters including MLB.com's Bill Ladson this past July. "'Randy is a guy that I’ve had great respect for [for] a long time,'" the General Manager said, "'I think that he’s certainly a manager-caliber, he’s a manager candidate and he has a lot of manager capabilities and we love having him on the staff.'" 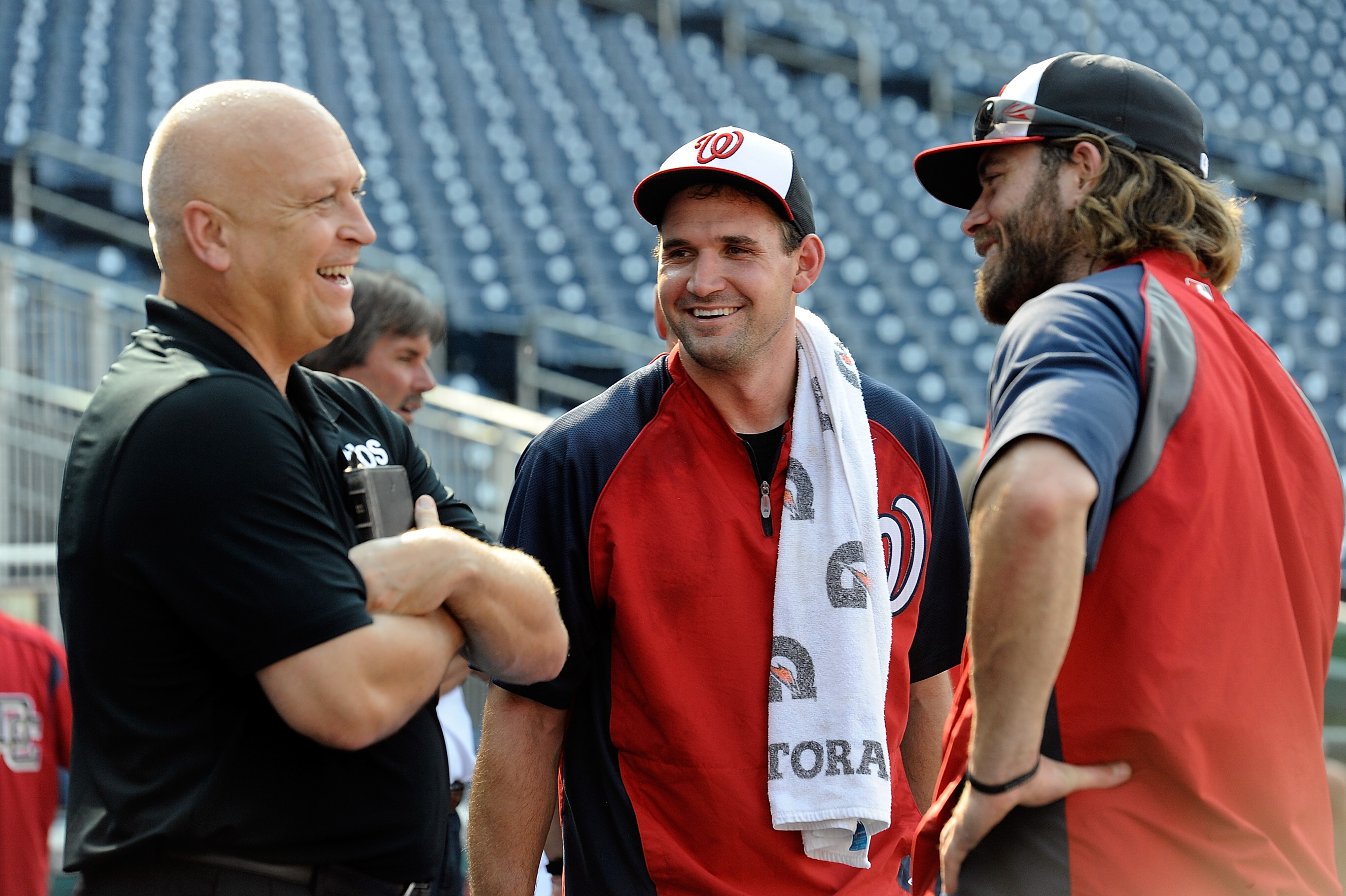 Will Rizzo promote Knorr? Will he buck the trend and reach into his own past to bring Matt Williams over from Arizona? Will the Nationals make the decision to go with Cal Ripken? Does Dusty Baker have a shot? It's likely to be the first offseason move the Nats make, but according to an MLB.com report today, the process is just getting underway...