Washington Nationals' manager Davey Johnson expected a lot out of Stephen Strasburg in 2013 and as he explained throughout the season, the 25-year-old right-hander is just a few adjustments away from becoming the best Stephen Strasburg he can be...

April 7: The follow-up to Stephen Strasburg's seven scoreless innings on Opening Day against Miami was a 5 1/3 inning outing against the Reds on the road in Cincinnati's Great American Ballpark in which Washington's then-24-year-old right-hander, who turned 25 in July, allowed four walks, nine hits and six runs, all earned in a 6-3 Nationals' loss. Strasburg threw 40 pitches in the first two innings, giving up three runs in the first and 114 pitches total in the 5 1/3 innings he was on the mound before leaving the game in a hail of singles as the Reds broke up a 3-3 tie with a three-run rally in the sixth.

"He threw the ball all right, but didn't hit his spots when he needed to and it cost us," Johnson said. - Davey Johnson on Stephen Strasburg vs Reds

"Some days you're just going to give up a lot of singles," the Nats' '09 no.1 overall pick said afterwards, "and when they all get on base they seem to come up with the clutch hit, so you've just tip your cap and move forward."

Davey Johnson told reporters it boiled down to Strasburg's lack of command early, though it came around. "He threw the ball all right, but didn't hit his spots when he needed to and it cost us," Johnson said. "I thought he mixed his pitches up good," the Nats' skipper explained, "but it's again the location of pitches [that] means everything. And that was a tough one." Strasburg did, however, throw one heck of a changeup that day:

"He actually threw quite a few changeups," Johnson said. "He didn't have much location on it. He was leaving a lot of them up. Other than that, [he] used all his pitches. I've seen him have better location on all of them."

July 12: Stephen Strasburg had four starts in 2013 in which he threw two innings or less. A May 31st start in Atlanta ended after two innings when the right-hander was lifted with a lat strain that led to a DL stint. The second time he left the mound after just two innings was in his final start before the All-Star Break when he faced the Marlins he shut out for seven innings on Opening Day and surrendered five hits, four walks and seven earned runs in 2 IP in which he threw 66 pitches. The Nationals took a 3-0 lead in the first, but the Fish responded with a five-run bottom of the inning in what ended up an 8-3 game in the Marlins' favor. Strasburg said it was just one of those days that happen to anyone, but what mattered was how be bounced back.

"It can happen to anybody, but it's kind of remarkable to happen to him." - Davey Johnson on Strasburg's rough start in Miami

"It can happen to anybody," Davey Johnson agreed, "but it's kind of remarkable to happen to him."

As Strasburg explained it, he was dealing with a recurring mechanical issue he'd struggled to work out. "If I fall off to the first base side too much then everything gets out of whack," he said. "I've been battling through it the last couple starts, been able to make the adjustments and tonight I just couldn't do that."

"He had a few little mechanical problems," Johnson said. "He's flying open a little bit. He's been awfully good. I guess he's entitled to one bad one. But it just was a tough time, we got him a lead and he had some problems."

August 5: Over a four start stretch from July 19th to August 5th, Stephen Strasburg was (0-2) with the Nationals 0-4 in losses to the Dodgers, Pirates, Tigers and Braves in which they gave the right-hander a total of seven runs of support in 3-2, 4-2, 5-1 and 3-2 losses. The second run, in particular, of the two runs Strasburg allowed in seven innings of work in the fourth loss, to Atlanta in the nation's capital, angered his manager. Braves' outfielder Justin Upton singled with two down, stole second and scored on a Freddie Freeman single that broke up a 1-1 tie.

"He has the same pattern every time. And, I mean he's very quick to the plate, but he is locked in his ways." - Davey Johnson on Strasburg w/ runners on

The stolen base by Upton, which put the go-ahead run in scoring position with two down for Freeman, who was 40 for 90 w/ RISP at that point in the season, was all on Strasburg according to his manager, who was frustrated with his pitcher's issues holding runners.

"I mean, we've worked with him and worked with him," Johnson said after the game. "He has the same pattern every time. And, I mean he's very quick to the plate, but he is locked in his ways. We throw over there more than we want to, just because of that. And he doesn't even wait to do that. It's always right from the get-go. That's still a work in progress."

September 8: In desperate need of wins as Washington fought to remain relevant in the Wild Card race, the Nats beat the Miami Marlins 6-4 on Sunday, September 8th, but they had to battle back from a 3-1 deficit to earn the win and two of the three runs Stephen Strasburg allowed in the bottom second to put the Nationals behind came on balks, one with the bases loaded and two outs later with runners on second and third.

"It's hard to believe he did it twice, but he did. The same kind of issue. So, we should be past that, I mean, [that] shouldn't happen at this level at this point." - Davey Johnson on Strasburg balking in two runs

An embarrased Strasburg told reporters it happened because he had switched from the stretch to the windup because he was more comfortable pitching from windup with a runner on third, but he then forgot that it was the second sign from his catcher with a runner on second and balked twice when he started his windup and stopped when he saw catcher Wilson Ramos was still signaling.

"Normally when he has runners at second and third or the bases loaded he goes out of the stretch," Johnson explained. "He feels like he has a little better stuff when he's in the windup. And when there's runners on second, it's second sign, and the first sign that went down he liked it and he started going to it and [then stops], then it's a balk. It's hard to believe he did it twice, but he did. The same kind of issue. So, we should be past that, I mean, [that] shouldn't happen at this level at this point."

The Nationals' 70-year-old skipper was also frustrated with the fact that Strasburg continued to let things bother him that should be of no concern. "Sometimes he takes issue with certain things that go on in a ballgame that shouldn't have any bearing on what's going to happen in the ballgame," Johnson said. "He's better than that. And his only thing was his command issue. When he's throwing the fastball, changeup and curve ball over, he overmatches people. When he misses with everything and then has to come in there he thinks they're bushwhacking him."

"He was actually awful. He was. I mean, every pitch he threw was up. He's got such great stuff, but everything was belt-high." - Davey Johnson's honest take on Stephen Strasburg vs Marlins

September 22: The last home start of the season for Stephen Strasburg took place on September 22nd. He held the Miami Marlins to three runs on six hits in six innings pitched. The Nationals won, 5-4, but Davey Johnson wasn't particularly impressed with the right-hander's outing. "He was actually awful," Johnson told reporters. "He was. I mean, every pitch he threw was up. He's got such great stuff, but everything was belt-high. I grew to love him when he pitched for me in the Olympics in Beijing. He's a pitcher. He has command. Everything is right on the knees."

"When he gets the mindset that all he has to do is go after them and make his pitches and locate them," Johnson said, "it doesn't matter how fast they are or whatever, he's going to be real dominant. But that wasn't vintage Strasburg tonight, for me." 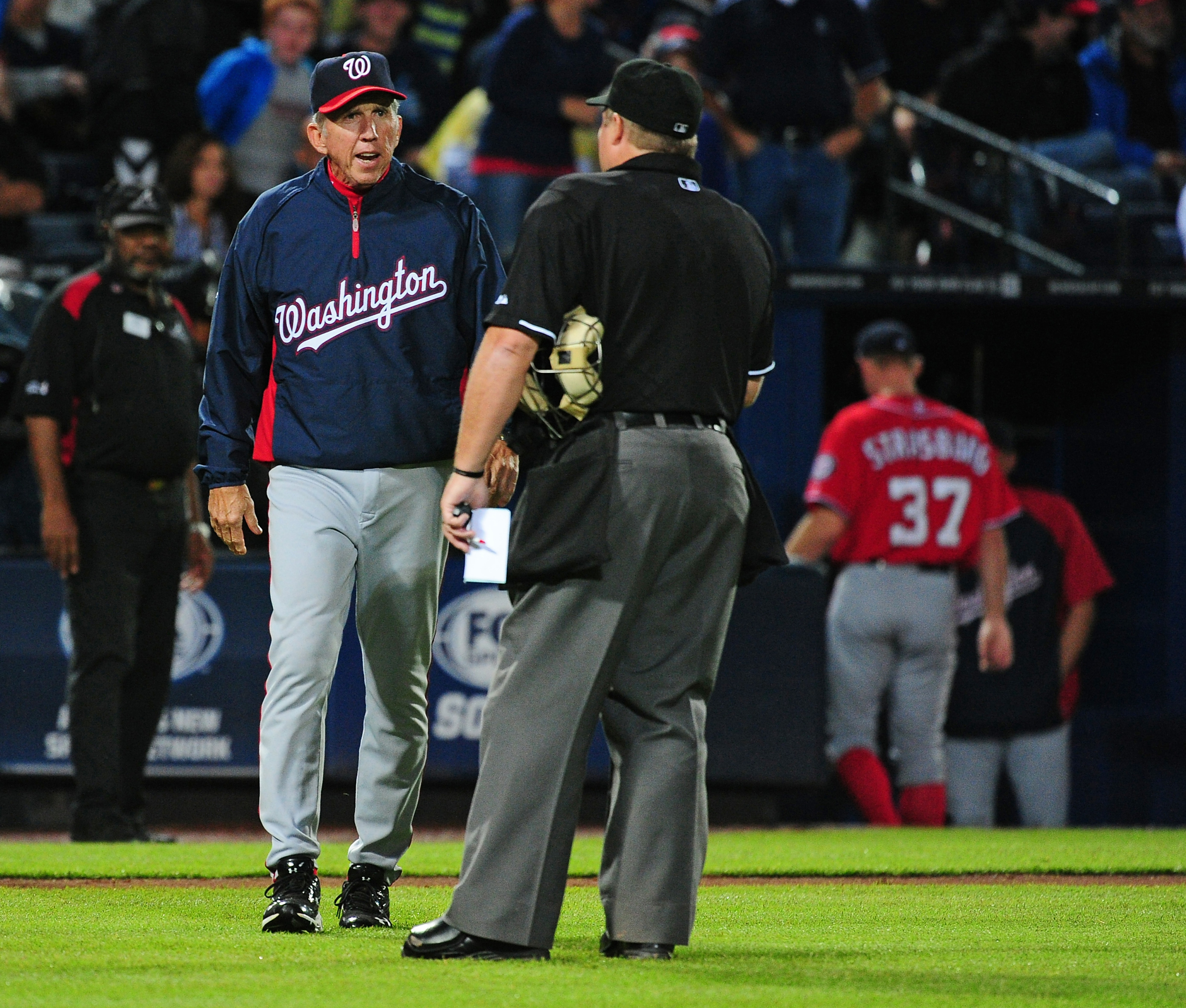 Though Davey Johnson lamented the fact that Strasburg couldn't get to .500 on the year, he also acknowledged that the pitcher's W/L record was misleading. "A bunch of times didn't score any runs," he said, "or one run or two runs. His numbers are indicative that he should have won 15 ballgames, at least." Overall, Johnson told reporters, he was impressed with the picher's consistency in his fourth major league season.

"He's still, there's a few things that he could do better," the Nats' outgoing manager said. "He knows what they are. He's a little too regular still at times, but he's made improvements. He's getting to be the complete pitcher. He's awfully good as it is, but there's still more room in there for improvement." Johnson said he'd seen Strasburg grow though and change as a pitcher.

"He's much calmer," Johnson said, "and he's not letting the little things bother him and he's right where he needs to be."