Nationals Top 5 Images Of 2013: Bryce Harper vs Wall In LA

Stephen Dunn (Getty Images) captured the moment above, the second on our list of the Nationals Top 5 Images of 2013, in Dodger Stadium in Los Angeles on May 13th moments after Bryce Harper collided with the right field wall chasing a fly to right by Dodgers' catcher A.J. Ellis.

Share All sharing options for: Nationals Top 5 Images Of 2013: Bryce Harper vs Wall In LA

Bryce Harper made his MLB debut in Dodger Stadium in late April 2012. In early May 2013, the 20-year-old, 2010 no.1 overall pick and the Washington Nationals traveled to Los Angeles again to take on the Dodgers. Harper started his second major league season with a .344/.430/.720, six double, nine home run April, but he injured himself in the last game of the month, leaping into the right field wall in Turner Field in an attempt to catch a fly to right by Tim Hudson that went in and out of his glove for a home run when the Nats' right fielder hit the fence, hard. He showed no effects of the collision in the immediate aftermath. He checked his glove, trying to figure out how he missed it. Harper would later say that he was never again 100% this season after that game.

"I feel sorry for the walls, because [Bryce Harper is] going to keep running into them." - Davey Johnson on Bryce Harper in LA

A week after the initial collision in Atlanta, Harper and the Nats were in LA. The Nationals' opening day left fielder started in right field in Dodger Stadium with Jayson Werth on the DL for a hamstring injury and starting for the Class-A Potomac Nationals as he worked his way back to the majors. Harper was 1 for 1 with two walks after four and a half innings in LA. Dodgers' catcher A.J. Ellis led off the home-half of the fifth with a fly to right...

Harper left the game after running into the right field wall tracking down the fly ball. He walked off the field with a little assistance. He suffered a cut on his neck either from his face-first collision with the fenced out-of-town scoreboard/wall or from the necklace he was wearing.

"It's kind of a little bit like if you get into a car crash or something, get into a fender bender where you just get jostled or an airbag hits you..." - Mike Rizzo on 106.7 the FAN on Bryce Harper's injuries

"I feel sorry for the walls," Davey Johnson joked after the game, "because [Bryce Harper is] going to keep running into them." Harper received 11 stitches in his neck. The first tests showed no signs of a concussion. He banged his shoulder and whole left side up from top to bottom.

Nationals' GM Mike Rizzo said the injuries were similar to those suffered in a car accident.

"He's sore like any kind of accident you get into," Rizzo told 106.7 the FAN In D.C.'s Holden Kushner and Danny Rouhier after the collision. "It's kind of a little bit like if you get into a car crash or something, get into a fender bender where you just get jostled or an airbag hits you or something like that, you're just sore and that's where he's at right now." 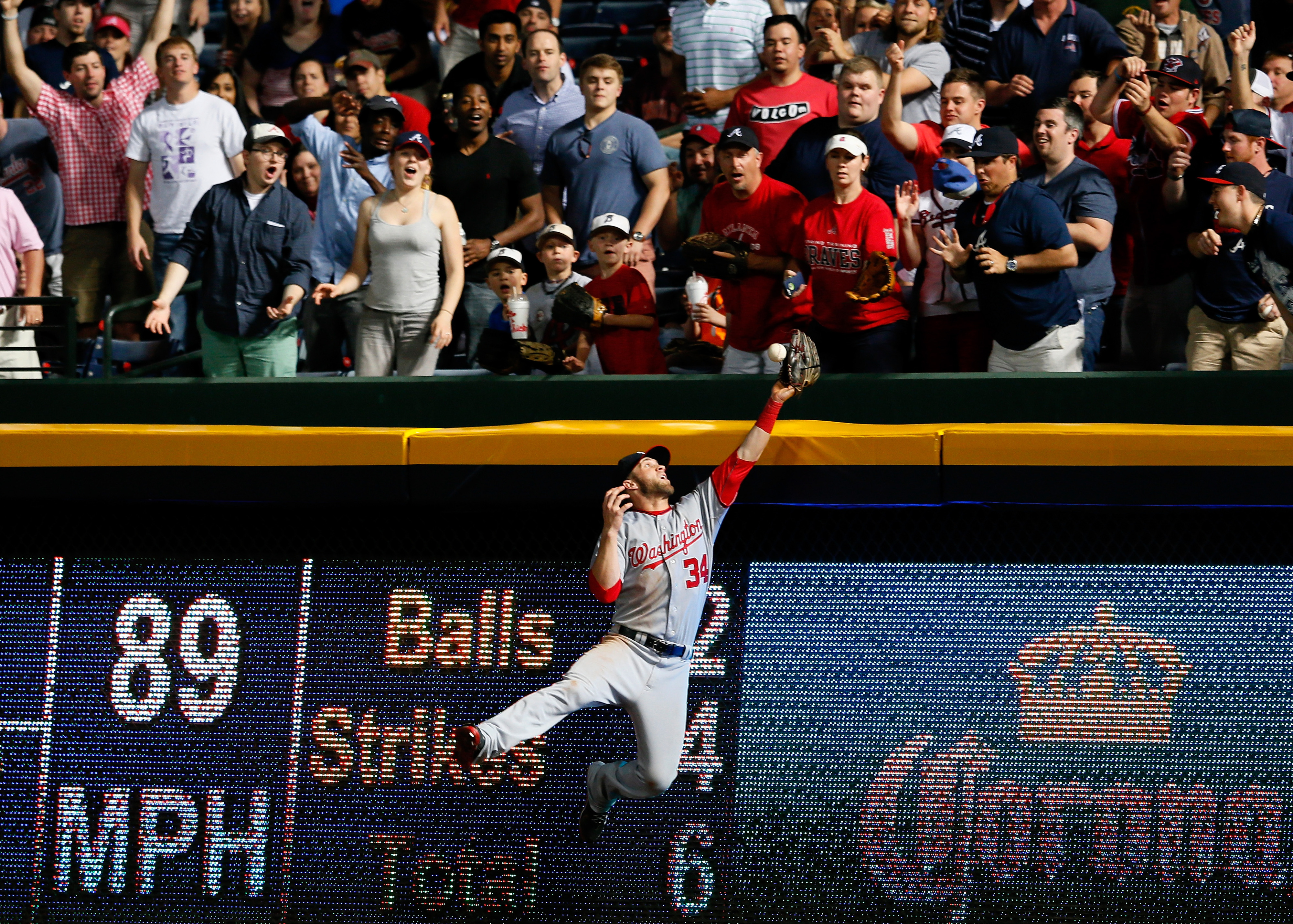 Two days later, Harper sat for the first time with a bruised left side and bothersome left knee. He returned to the lineup, but went on the DL at the end of May and eventually missed over a month with what was diagnosed as bursitis in his left knee. He returned to the lineup on July 1st, played through a hip issue and finished the season with a stretch of 74 games and 319 plate appearances after the DL stint over which he had a .266/.358/.431 line with 17 doubles and eight home runs.