Steven Souza, Jr., Adrian Nieto and Brian Goodwin were the only Washington Nationals' prospects in action this afternoon in the Arizona Fall League's Championship Game. The Mesa Solar Sox, dropped a 2-0 decision to the Surprise Saguaros in the fall finale...

Washington Nationals' prospect Steven Souza, Jr. improved to 16 for 43 in Arizona Fall League action with a broken bat single to center field off 20-year-old Baltimore Orioles' left-handed pitching prospect Eduardo Rodriguez on the first pitch of the first at bat in the second inning of this afternoon's AFL Championship Game. Souza, 24, who was on the Mesa Solar Sox' "taxi squad" this fall, stole 10 bases in 11 games in AFL regular season action after stealing 20 in 26 attempts with the Double-A Harrisburg Senators in 2013, but he was caught stealing by 20-year-old Texas Rangers' prospect Jorge Alfaro for the second out of a scoreless Sox' second inning today in Scottsdale, Arizona's Scottsdale Stadium.

Orioles' outfield prospect Henry Urrutia doubled to center over Souza's head with two down in the bottom of the second inning, (Souza wasn't catching this one), then scored from second base on an RBI single to center by Saguaros' catcher Jorge Alfaro. Souza came up throwing and launched what Baseball America's John Manuel described on the MLB Network broadcast of the game as a "YOLO" throw that was high and wide of home. LA Angels' backstop prospect Jett Bandy jumped out to greet the ball up the third base line before making a strong throw to second to get Alfaro for the third out of the inning after the Surprise Saguaros had taken a 1-0 lead.

#Nationals Steven Souza Jr. has really played under the radar this fall. He hit .357 but only got 42 at-bats-half the number of most. Solid.

Souza's second at bat in the AFL Championship game came in the top of the fifth after Cubs' prospect Dallas Beeler pitched his way out of a two on, no out jam. Souza crushed the first pitch he saw (2 ABs, 2 pitches) from Milwaukee Brewers' right-hander Tyler Cravy, 24, but lined out to Saguaros' left fielder Henry Urrutia on the warning track for the first out of the Solar Sox' fifth inning, leaving the Nats' outfield prospect 1 for 2 on the day...

Noe Ramirez, a 23-year-old, right-handed Boston Red Sox' prospect, was the third pitcher Steven Souza, Jr. faced in three at bats when the Nats' prospect led off the top of the seventh for the Solar Sox. Ramirez got up 1-2 and got Souza to chase a slider outside for a check-swing strike three. 1 for 3, single, CS for Souza.

Surprise brings in closer #Brewers David Goforth to protect a 2-0 lead, now just 1 out away from an AFL championship. #AFL13

Brian Goodwin made a pinch hit appearances in the top of the eighth, grounding out in his only at bat. Nationals' backstop prospect Adrian Nieto, 24, entered the game as the Solar Sox' catcher for Detroit Tigers' prospect  Corey Knebel in the bottom of the eighth inning. With a runner on second, Knebel got a breaking ball by Nieto for a wild pitch/passed ball that put a runner on third with one down. Knebel put Cleveland Indians' prospect Tyler Naquin on to set up a double play, but Boston Red Sox' infield prospect Mookie Betts hit a one-out RBI single to center field to put the Saguaros up 2-0. 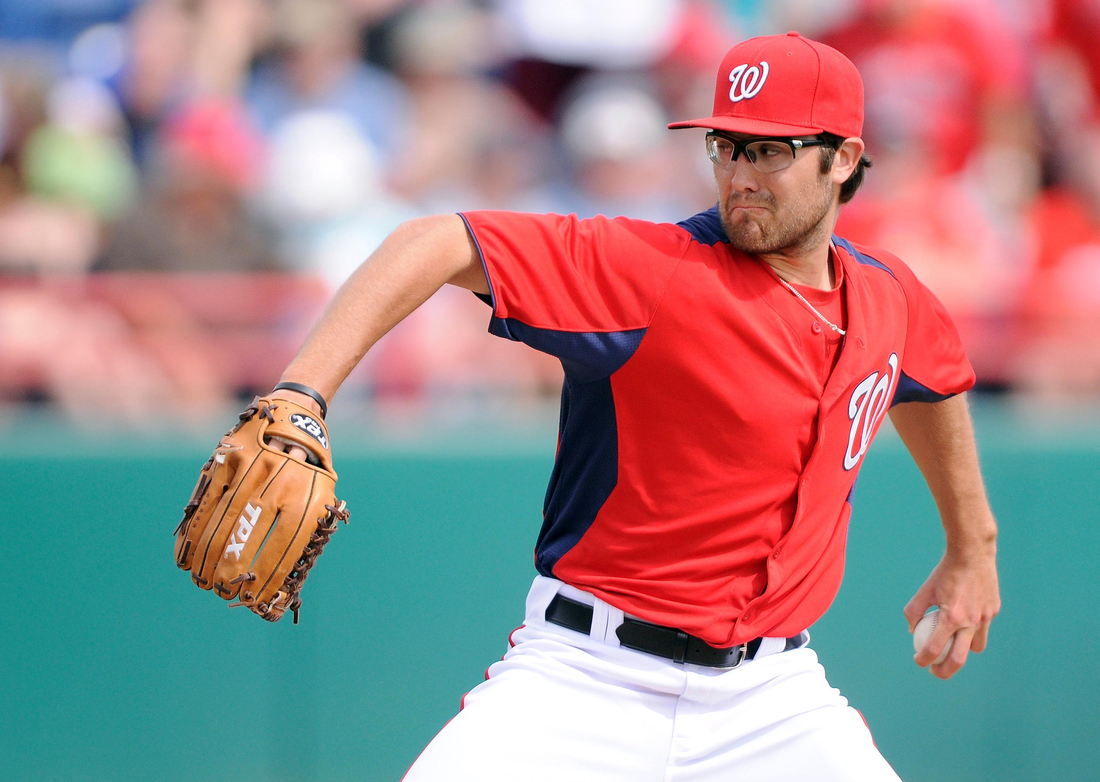 Brewers' right-hander David Goforth came on to close it out in the ninth. Milwaukee's 25-year-old relief prospect got the first two outs before Steven Souza stepped in for his fourth at bat. Souza checked his swing on a 2-2 fastball inside to get to a full count, but took a fastball low and away for a called strike three and the game's final out.