Nationals Pitching Report: Getting to the Bottom of Tanner Roark's Big Fly Rate

Tanner Roark emerged on the scene in the second half of 2013, showing an impressive display of poise and performance on the way to a sterling 2.41 FIP. But Roark also rocked a miniscule HR/FB rate, a stat that varies significantly from year to year. Let's way over-analyze some small samples to see how Roark did it, and if there's anything to look for in 2014.

Share All sharing options for: Nationals Pitching Report: Getting to the Bottom of Tanner Roark's Big Fly Rate

While Tanner Roark had an excellent stint with Washington in 2013, forecasting a similar 2014 isn't a lock. That's because he allowed just one home run over 53.2 innings this past season. One metric where he's likely to come back to the pack -- as several Federal Baseball readers have pointed out -- is his HR/FB rate.  Just 2.6% of his fly balls left the yard, against a major league starting pitcher average of 10.8%.

Given HR/FB%'s variability, it shouldn't be a huge surprise that someone posted a crazy number. Indeed, others have noted that Henderson Alvarez displayed a similar HR/FB figure (here's a little more on Alvarez). And Roark also benefited from a BABIP (.243) that was .051 below the league average (.294).

It is understandable, then, why the projection system Steamer thinks that Roark will perform worse in 2014:

His fastball isn’t especially fast at 86-88 MPH, though did see him hit 91 a few times in a start for Frisco. He mixes in a curveball and changeup, both solid, and he throws strikes. He adapted well to Double-A last year, the hardest test for a finesse pitcher, and he’s shown the flexibility and adaptability to pitch in any role. Roark may be just a Quadruple-A guy, but he’s earned a shot at higher levels and could end up seeing major league action in ’11 if the quarks dance properly.

Revisiting his assessment in September of this year, Sickels noted an uptick in Roark's fastball velocity, with the 26-year-old topping out at an impressive 94 MPH. Important for Sickels was that "[h]e keeps the ball down and throws strikes, as he always has. Roark himself credits a more aggressive mental approach for helping him develop. The extra velocity must have something to do with it as well."

Overall, Sickels saw Roark as a 4th starter type. There was some consensus in the scouting community; for example, Keith Law tweeted in September of this year that Roark had the ceiling of a fifth starter.

I checked out the location of all balls in play that Roark allowed this past season, looking for deep fly balls that came close to clearing the fence. Then, I matched those batted balls with Roark's location to see if batters "just missed" a meatball, or if Roark was hitting good spots while the flies simply carried.

Perhaps unsurprisingly, when batters went to the warning track (or close to it), Roark often missed up from his intended location.  But his mistakes weren't complete mistakes.  By keeping the ball in, missing against a low-power hitter, or benefiting from a tough park to hit homers in, Roark minimized the opposition's chances to knock the ball out of the park when he didn't execute at his best.

First, here are the ball in play maps where opposing hitters flew out to the track, or near it. I've circled in white those that went close, and listed the ballpark above the map. 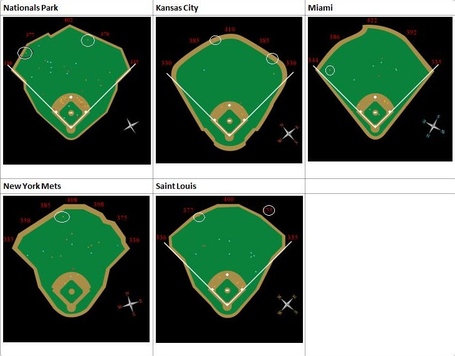 First, the Nats Park shots. The Braves' Freddie Freeman is responsible for the blast to right-center, while Josh Satin of the Mets doubled to deep left.

Here's the intended location and contact points for the Freeman at-bat: 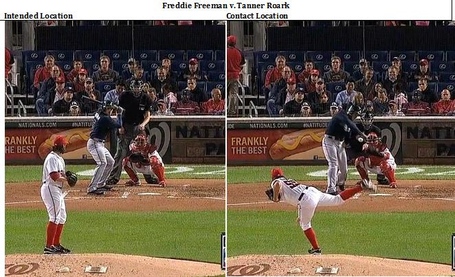 Roark misses up, but manages to avoid straying too far out over the plate.  As a result, Freeman is unable to put the fat part of the barrel on the ball.  In other words, it was an excusable miss, and because Freeman's a pretty powerful hitter (ISO of .181), I think it's reasonable to conclude that Roark wasn't crazy lucky in getting away with an F8. 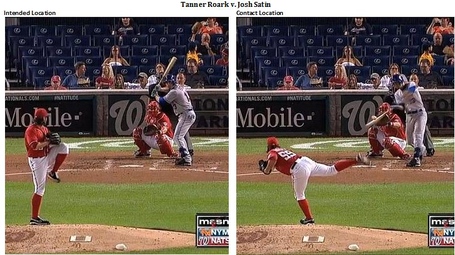 Here, Roark misses again.  The ball is elevated once more, and Satin makes good contact pretty close to, if not on, the sweet spot. Yet Satin is a below-average power hitter, as his career .126 ISO mark shows. While Roark picked a good location to miss against Freeman, he picked a good hitter to "miss" on here. Satin doubled, but the coaching staff had Bryce Harper positioned rather shallow on the play. 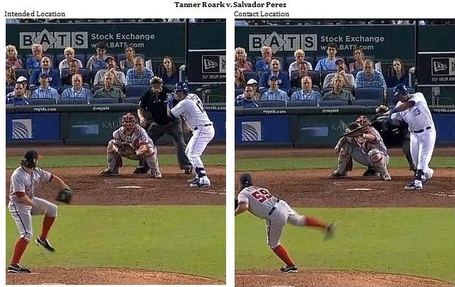 Roark misses up for a third time on a deep fly, and Perez goes with the pitch to right (Harper ended up catching the ball on the warning track). Perez showed good pop in 2012, but only showed average power this past season (.141 ISO). A more powerful hitter probably knocks this out of the park. Still, Kauffman isn't the best place to hit home runs, so Roark had that working in his favor too.  It probably also helped on Justin Maxwell's deep shot to center (no video for that one unfortunately). 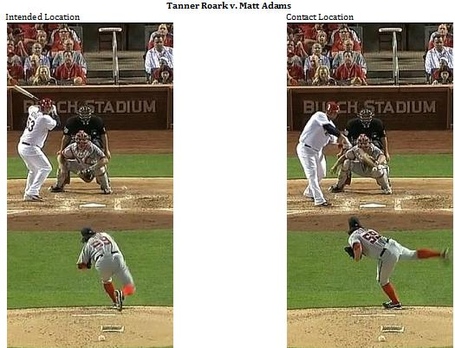 I'm not really sure where Wilson Ramos wanted this pitch. Low, presumably. Roark delivers the fastball knee-high -- probably higher than he would like -- very slightly over the outer-half of the plate, but really more down the middle.  This ball never had a chance of getting out, mostly because it wasn't more than 10 feet off the ground at any point.  Harper tracked this one down in the gap with a nice running catch. 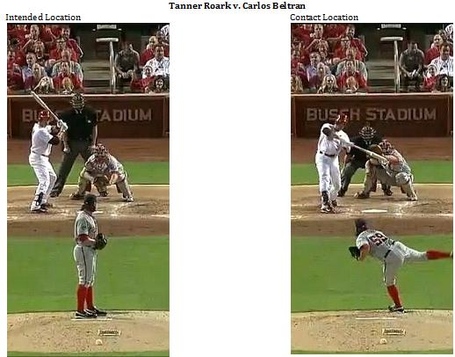 Well, no one is perfect. Roark misses in one of the worst locations possible -- belt high, down the middle -- to an excellent hitter. Not even Busch Stadium's low home run park factor could help Roark here, as Beltran deposited this fastball 387 feet away from home plate into the right-center bleachers.

What is the overall take away? When Roark allowed deep fly balls, he often missed up. Yet his mistakes were acceptable in a sense, because he still had things working in his favor: Against Freeman, the pitch was far enough in to prevent the lefty from extending; against Satin, Roark did not pay too dearly since Satin is a weak hitter; against Perez, Kauffman Stadium's home run resistance benefited the young righty hurler; against Adams, Adams failed to elevate the ball enough to leave the yard.

Could these things swing the other direction in 2014? Of course. And sadly, they probably will. But Roark didn't seem to be too lucky with some of the results highlighted above.  He also earned a pretty great infield fly ball rate (13.2%, over 3% greater than the league average).  This mark shows a mild negative correlation with HR/FB rate (-.302), which makes sense.  It similarly helps explain his low BABIP.

Guess what else? The awesome Steve Staude at Fangraphs found that a pitcher's vertical movement on a sinker has a fairly strong positive correlation (.634) with IFFB%. Roark's sinker -- which he throws almost 60% of the time -- was in the top quarter of qualified pitchers when ranking by vertical movement.  It's a bit odd for this to be true while at the same time sinker usage is negatively correlated with IFFB% (which itself is understandable), so make of that what you will.

It will be interesting to see how Mike Rizzo approaches the pitching market this off season. I'm optimistic about both Roark and Taylor Jordan contributing to the starting rotation in 2014. Young, cost controlled starters at the back end of a rotation seem to make more sense to me than an Edwin Jackson or Dan Haren type. Regardless, it will be enjoyable to watch Roark this coming year.