Washington Nationals' prospect Brian Goodwin was 1 for 5 tonight in the AFL Fall Stars Game, but it was a former Nats' prospect who really impressed. Alex Meyer earned the win in Arizona with three scoreless innings of work for the AFL West.

Meyer, a 6'9'' right-hander who was dealt to Minnesota last winter in return for Twins' outfielder Denard Span, was the 21st overall pick in the 2011 Draft, taken with the Nationals' second first round pick after Anthony Rendon (no.6 overall). Goodwin was the 34th overall pick. Both were taken with compensatory picks the Nationals received when Adam Dunn left D.C. for the Chicago White Sox as a free agent.

Goodwin, ranked the top prospect in the Nats' system by MLB.com and the third-best by Baseball America, singled on a 1-0 fastball from Meyers with one down in the top first, but the speedy outfielder was caught trying to steal second by 21-year-old San Diego Padres' backstop prospect Austin Hedges. Meyer, no.3 on the Twins' prospect list according to MLB.com, was throwing a nasty knuckle curve and a high 90's heater early, and the big right-hander needed 13 pitches to get through a scoreless first.

A misplay by Houston Astros' prospect Delino DeShields, Jr. in left forced Meyer to throw eight extra pitches in a 19-pitch scoreless second that had the right-handed starter up to 32 overall after two innings in which he showed off a fastball that sat consistently at 96-97 mph, a change that came in about 10 mph slower and a knuckle curve that looked like a fastball until it dropped out the zone.

The second at bat pitting Goodwin against Meyer came with one out in the third after St. Louis Cardinals' prospect James Ramsey bunted his way on. After Goodwin fouled off a 2-0 fastball, Meyer threw a 2-1 change by the Nats' top prospect. Goodwin spit on a 2-2 slider that missed, but K'd swinging on a filthy 3-2 curve in the dirt on which Ramsey was thrown out for Hedges' second caught stealing of the game and a strike'em out, throw'em out inning-ending double play.

Meyer was done after three innings and he ended up earning the win. He told MLB.com's Jonathan Mayo that he happy with the outing as a whole though not thrilled with his fastball. "'My curve was good for me tonight,'" he told the MLB.com reproter. "'My fastball command wasn't the best, but it was effective enough.'" 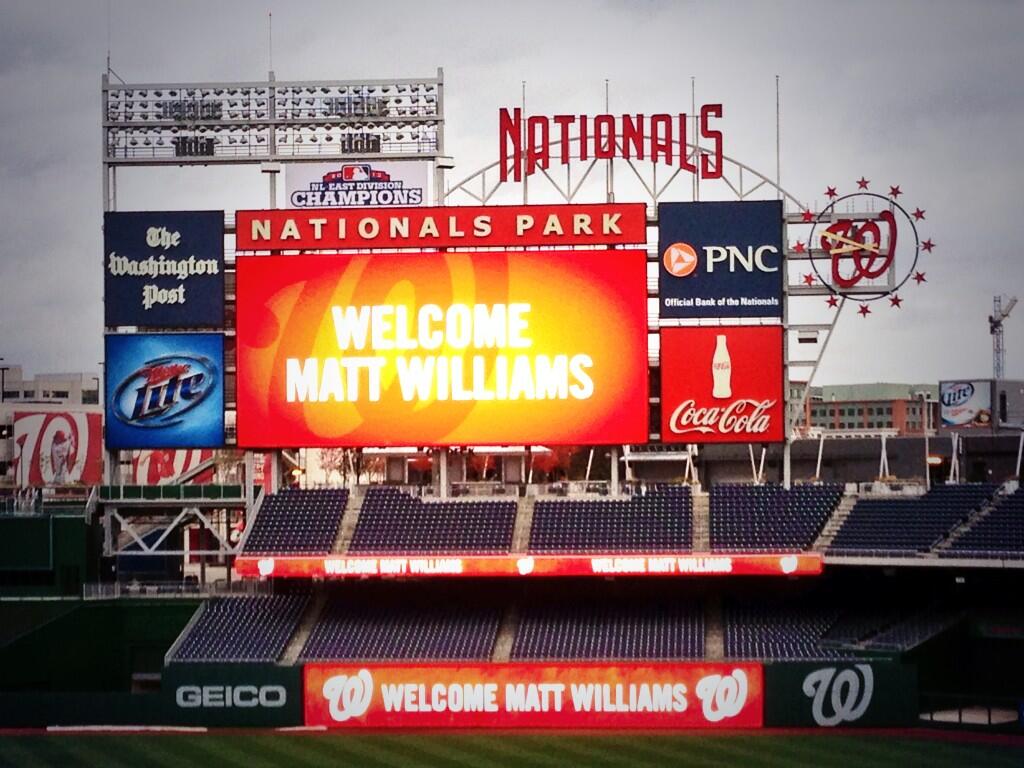 Goodwin went hitless in his final three plate appearances of the Fall Stars game, leaving him 1 for 5 in the prospect showcase. Fellow Nats' minor leaguer Adrian Nieto replaced the AFL East's starting catcher, Yankees' prospect Peter O'Brien, in the sixth and got two at bats in. The 23-year-old Nationals' catching prospect was hit by a pitch in his first plate appearance and scored the East's first run in what ended up a 9-2 loss.

The AFL West was led by Meyer, Texas Rangers' prospect Brett Nicholas and Seattle Mariners' outfield prospect Stefen Romero, both of whom hit two home runs in the win.