A day and a half of Washington Nationals-related links since we weren't able to do anything on Thursday night/Friday morning with some issues affecting the SB Nation's sites. We apologize for any inconvenience and we piled all the links together for a bit of Saturday reading...

I was in the middle of putting together a link post on Thursday night when the SB Nation (and all of Vox Media's sites actually) started experiencing some "technical difficulties" that kept me from finishing the post, and over the last 24 hours a series of issues kept me from getting the post (or anything else) done, so I'm playing a little catch up right now. What did we miss in the last day+? Not much. Former Nats' catcher Kurt Suzuki signed with the Twins? The Nationals announced their coaching staffs for all their minor league affiliates with the announcement of new Triple-A Skipper Billy Gardner, Jr. the biggest reveal. Other than that? Well, the third week in December is usually kind of a dead period news-wise. The Nats did, however, announce that they'd signed veteran catcher Chris Snyder to a minor league deal for the second straight season. Last spring, Snyder didn't stick. Can he beat out Jhonatan Solano and Sandy Leon for the backup role in the nation's capital? We'll find out this Spring. Until then, it's links and lots of them (two and a half day's worth) starting... RIGHT NOW!!! Or at least after I copy and paste all the coaches from the Nats' minor league affiliates in here: 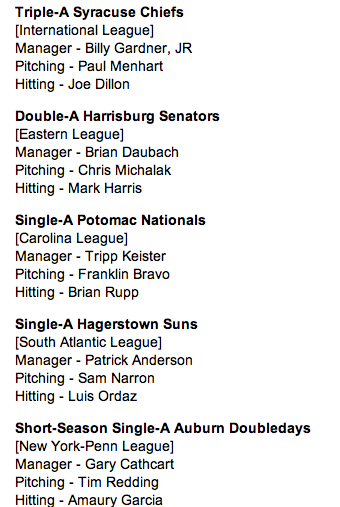 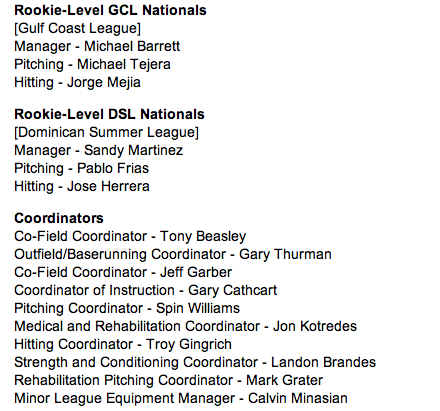 • "For the Nationals to retain Desmond and Zimmermann, this winter may prove crucial. Both players are eligible for salary arbitration and are scheduled to hit free agency in two years." - "Nationals face key negotiating season with Jordan Zimmmermann, Ian Desmond" - Adam Kilgore and James Wagner, The Washington Post

• "That early December night, Lombardozzi was on his way to dinner when he received a call from Nationals General Manager Mike Rizzo about an hour before news of the trade reached the public." - "Steve Lombardozzi opens up about trade" - James Wagner, Washington Post

• "The signing of a backup catcher, possibly. The addition of a veteran corner infielder, perhaps. And maybe another trade or seven between the Nationals and Athletics." - "Nationals Pastime: On Brown and the Rizzo/Beane dynamic (plus housekeeping note)" - Dan Kolko, MASNSports.com

• "The Nationals acquired Suzuki in August of 2012 from the A’s and traded him back in August of 2013." - "Former Nats C Kurt Suzuki joins Minnesota Twins" - Chase Hughes, Nats Insider

• "The Nats, the NL’s sixth-best team last year, have probably nudged ahead of the Pirates and Reds." - "Baseball pennants are won in the winter, so let’s look at the standings" - Thomas Boswell, The Washington Post

The #Nats have agreed to terms with catcher Chris Snyder on a Minor League deal with an invitation to Major League Spring Training.

• "The Nationals’ 40-man roster was already full heading into the draft, so they did not procure anyone in the Major League phase (though they saw catcher Adrian Nieto taken by the White Sox)." - "Down on the Farm: The Rule 5 Draft" - Noah Frank, Curly W Live

• "Since Rizzo seems to be more of a 'set it and forget it' guy when it comes to rosters, I think it's important we set the bench to be as good as possible." - "Out of Blogfice" - Harper, Nationals Baseball

• "The Washington Nationals announced Friday that Tripp Keister has been promoted from the Class A Hagerstown Suns to manager of the Potomac Nationals for the 2014 season." - "Keister promoted, named P-Nats skipper" - Potomac Nationals, Carolina League News

Happy Holidays from the Potomac Nationals! The front office will reopen Jan. 2nd at 9 am. pic.twitter.com/QO8NK0L4vY

A profile of new @HbgSenators manager Brian Daubach: A year away from baseball was more than enough http://t.co/apmZWfiWcW

• Phillies: "I've heard from frustrated Phillies fans because the team's offseason moves have not reassured anybody following an 89-loss season. They want to know why the Phillies haven't signed a marquee name to a big-time contract..." - "Inbox: Any big moves on horizon for Phillies?" - Todd Zolecki, phillies.com: News