Outgoing Washington Nationals' manager Davey Johnson liked what he saw as Stephen Strasburg matured over the course of his fourth major league season. He had surgery on his elbow in October, but the '09 no.1 overall pick is set for a big year in 2014...

Share All sharing options for: Nationals' Starter Stephen Strasburg In 2013 And 2014

Though the idea of pitching to contact had been stressed by the Washington Nationals since he initially joined the organization after being taken first overall in the 2009 Draft, Stephen Strasburg's pro career started with a fourteen-strikeout game against the Pittsburgh Pirates on June 8, 2010. He admitted afterwards that he sometimes got caught up in the moment and started to go for strikeouts, though he knew it wouldn't always be as easy for him as it was that night in front of 40,315 fans in Nationals Park in his major league debut.

"I just want to go out there and execute the majority of my pitches out there the way I can, and the strikeouts are more of an accident than anything." - Stephen Strasburg after his MLB debut, June 2010

"I just want to go out there and execute the majority of my pitches out there the way I can," the then-21-year-old right-hander told reporters, "and the strikeouts are more of an accident than anything. You want to go up there pitching to contact, wanting them to put the ball in play, and it happens some games, but not all the games are going to be like this." Strasburg made just eleven more starts that summer before suffering a tear of the ulnar collateral ligament in his right elbow.

Though he hasn't matched or bested that strikeout total in the 74 starts he's made since his debut, Strasburg did strike 13 batters out twice in 2012 and he's hit double digits in Ks ten times so far in his career. Now-former Nats' skipper Davey Johnson said last summer that he thought Strasburg got caught up in the hype and high K totals once he started pitching in the majors and didn't back to being the pitcher the manager selected for Team USA's roster in the Beijing Olympics in 2008 until this season.

"[He went] away from contact," Johnson explained, "But when he gets back to attacking hitters and going right after them with good location, he's nasty. But his stuff was always pretty consistent. It's just his command when he tries to do too much."

"I stirred up the baseball world well enough that it had more people becoming Nats fans..." - Strasburg to reporters in 2010

The Strasburg that Davey Johnson was looking for finally showed up in an August 11, 2013 outing at home in D.C. against the Philadelphia Phillies which saw the now-25-year-old starter strike out 10, walk one and throw just 99 pitches in the first complete game shutout of his MLB career. "He's always, ever since I had him in the Olympics," Johnson said, "he's always showed great command of the strike zone with his fastball down in the zone and basically fastball, curveball. I don't think he threw that many changeups today, it was basically fastball, curveball, but he was both sides of the plate. When he's like that, I mean, he'll have low-pitch games. How many did he end up striking out, 12?"

"I mean, that's going deep in games," Johnson said after the record was corrected by a reporter, "low pitch counts and striking out that number. Instead of going up and trying to miss the bats, he was pretty much saying, 'Here, hit it.' Which is great."

From The FBB Archives:

Strasburg: "I Stirred Up The Baseball World..." Scott Boras On Stephen Strasburg's Elbow

"He's still, there's a few things that he could do better," the Nats' outgoing manager explained. "He knows what they are. He's a little too regular still at times," Johnson said, referring to Strasburg's tendency to fall into too predictable a pattern with runners on base, "but he's made improvements. He's getting to be the complete pitcher. He's awfully good as it is, but there's still more room in there for improvement."

Rizzo On Davey Johnson On Strasburg 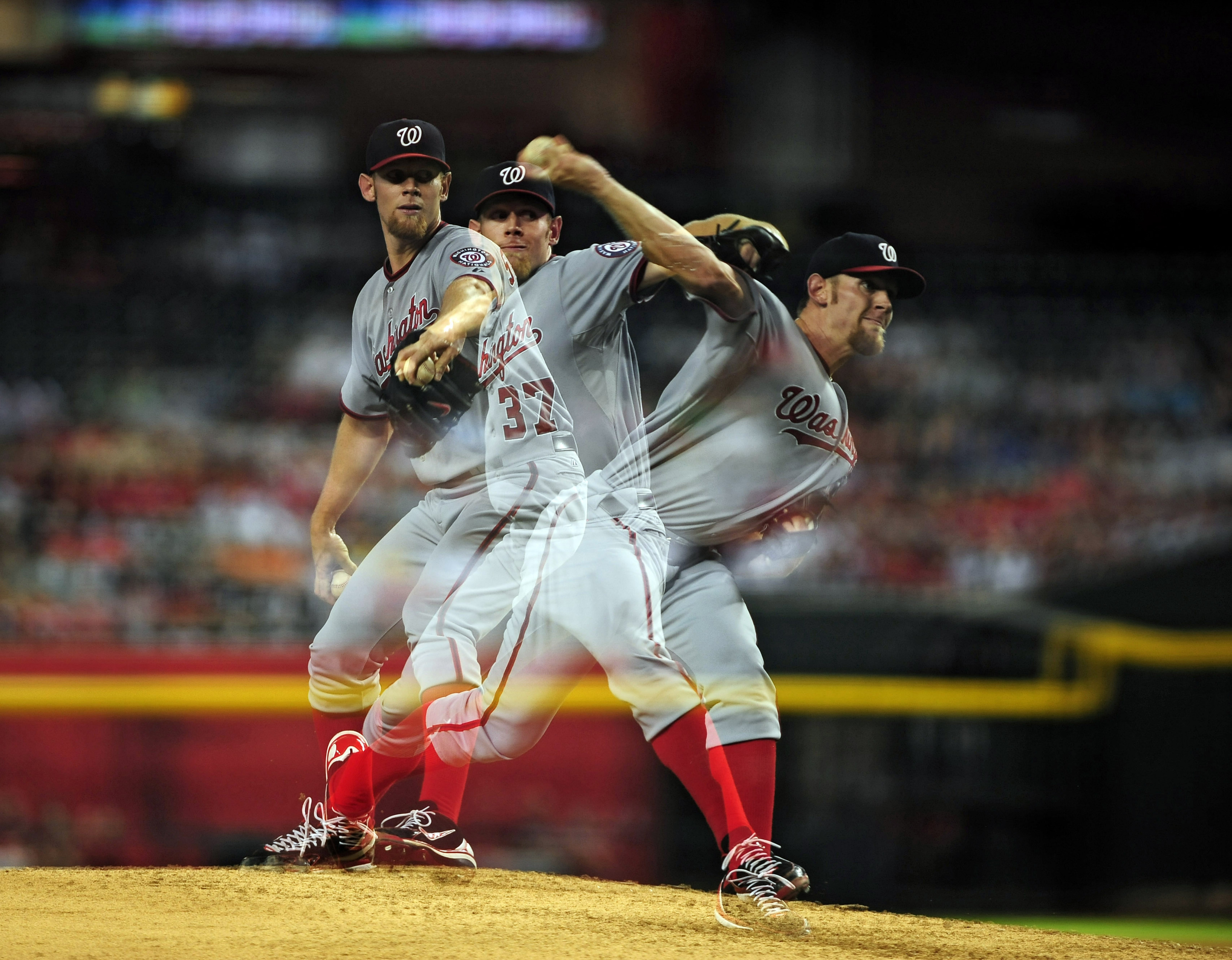 There was one important change over the course of the 2013 season, however, as Johnson saw it.

"He's much calmer," the manager for two and a half of Strasburg's first four seasons said last September, "and he's not letting the little things bother him and he's right where he needs to be." Strasburg had surgery to remove bone chips from his right elbow in late October, but he's expected to be ready for Spring Training and the start of the 2014 campaign.