In this year-ending Top 5 list, we look back at five stories that for one reason or another were our favorites from the 2013 season. They aren't necessarily the biggest stories of the year for the 2013 Washington Nationals, but more stories that we were happy to be there to cover or stories that were fun to write, were unique or for some other reason stuck with us when the season was over. First on our list was Davey Johnson delivering "breaking news" to reporters about a scouting report Branch Rickey wrote on the then-21-year-old Johnson when he was still a prospect in the Baltimore Orioles' organization. No.2 on our Top 5 of 2013 List is more prospect-oriented coverage.

The highlight of every season for me for the last few summers has been the Draft day conversations with members of the Nats' front office. There's not much I enjoy more than our yearly dose of scout-speak. The Nationals' first pick this season, since they gave up their top selection to sign closer Rafael Soriano, was the 68th overall pick in the second round which Washington used on Jake Johansen, a 22-year-old, 6'6'' right-hander out of Dallas Baptist University who then-scouting director Kris Kline said was the kind of prospect, "...we seek when we go out to the ballpark every day."

In his first taste of pro action this season, after signing quickly and getting started, Johansen pitched for the NY/Penn League's Auburn Doubledays and the Low-A Hagerstown Suns, putting up a combined 1.92 ERA in 51 2/3 IP over which he issued 23 walks (4.1 BB/9) and collected 51 Ks (8.88 K/9). Here's what Kline (who has since been promoted to assistant general manager and vice president of scouting operations) and Roy Clark (who has since left for a position with the LA Dodgers) said about Johansen after the Nats picked the pitcher...

The Washington Nationals selected right-handed starter Jake Johansen out of Dallas Baptist University with the 68th overall pick of the second round of the 2013 MLB First-Year Player Draft. After making the final selection of the second round, the Nats' Assistant GM and Vice President of Player Personnel Roy Clark and Scouting Director Kris Kline revealed that they had actually invited the 6'6'' right-hander to the nation's capital this week for a private workout that convinced them the hard-throwing pitcher was the pick for them if he was available when the Nationals' first pick of this year's draft came around.

"There's a lot of things to like about this young man," Kline said, "This is what we seek when we go out to the ballpark every day." - Kris Kline on Nats' 2nd Round pick Jake Johansen

The Nationals would have selected 33rd overall, but they forfeited that pick when they signed 33-year-old right-hander Rafael Soriano to a free agent deal this winter. Since they were drafting a lot lower than they have in years past when the Nats were losing 100 games regularly, general manager Mike Rizzo said the team would have to count on its scouts finding the right talent.

"There [are] going to be impact big leaguers in this draft," Rizzo told reporters this week, "Our job is to find out which guys those are? Where are the hidden gems? And take them, and have our development staff develop them into big league players. Major leaguers, impact major leaguers, are found all over the draft and with our scouting staff we feel that we're going to overturn all the rocks and try to find the hidden gems that will gives us a real impactful draft this year."

Here's the info on Johansen from the Nationals' press release on the selection:

The 6-foot-6, 235 lbs. Johansen cemented his status as one of college baseball’s top power arms after striking out 75 in 88.1 innings as a junior. Johansen went 7-6 with a 5.40 ERA in 15 starts and posted strong strikeout-to-walk (2.9/1) and walks per 9.0 inning (2.6) ratios. Twice during his junior campaign, Johansen posted double-digit strikeout totals (10 on both April 26 vs. University of Texas-San Antonio and February 22 vs. Mississippi Valley State).

Johansen is a graduate of Allen (TX) High School and participated in the Texas Scout Association All-Star Game in the Spring of 2011.

"He maintains his velocity, the sixth inning he's still 96-98. He's got a curve ball, slider and a changeup. The slider is an out-pitch now. It's a hard cutter that he'll thrown 88-90 and will blend into a slider." - Kris Kline on Jake Johansen's arsenal

The Nationals' Assistant GM and Scouting Director spoke to reporters about Johansen on a conference call after tonight's selection. "There's a lot of things to like about this young man," Mr. Kline said, "This is what we seek when we go out to the ballpark every day." Asked to break Johansen down, the scouting director said, "He's a 6'6'', 235 lb right-handed pitcher. If you put him next to [2012 1st Round pick Lucas] Giolito, you have some pretty good-looking bookends."

"You've got a guy that's 94 [mph] that's touching triple digits with his fastball," Kline continued, "I saw him twice this year. He maintains his velocity, the sixth inning he's still 96-98. He's got a curve ball, slider and a changeup. The slider is an out-pitch now. It's a hard cutter that he'll throw 88-90 and will blend into a slider. The curve ball is at times an above-average pitch and it's a 75-78 mph power downer curve ball. It's inconsistent as is the slider. This guy is -- I feel -- at 22-years-old is just scratching the surface and a late-bloomer. If we look at him from his high school days until last year and to this year, it's a very positive, encouraging change and progression to where he is today."

"If you look at his mechanics on the clips, videos and the things that we have on tape," Kline said, offering a comp though he said he didn't really like to, "His actions and arm action and delivery is very similar to Josh Beckett."

The Nationals' scouting director said Johansen "definitely" profiles as a starter in their minds. "Definitely a starter," Kline said. "He has starter actions. He repeats his delivery. It's a clean arm action. As I said, it's improved over the last year. You guys will see it for yourself. To me right now he profiles as a no.3 because the secondary pitches are a work in progress, but he does show you flashes of above-average breaking stuff. He has a good feel for his changeup. There is no reason why this guy can't -- with a few tweaks from our staff -- that this guy can't be a frontline guy."

Roy Clark jumped in at that point to offer his take on the tall right-hander the Nationals drafted. "We feel, we have numerous reports by many of our scouts that had him up to 100 [mph]," Clark said. "All of them said he's going to have a solid, average breaking ball. We brought him in this week, into Washington, we had [Nats' GM] Mike Rizzo, we had [Pitching Coach] Steve McCatty, we had our whole staff there to watch him, to analyze him to see if there was something we could pick up. Because we know he doesn't have good numbers. If he had good numbers, he wouldn't have gotten out of the top ten. But our guys feel like there are a couple of things that are easy fixes and we feel like when we get him signed and we turn this kid over to the best player development system in baseball -- in our opinion -- we think we've got a gem."

"We wouldn't have taken him if we couldn't sign him, " Kline said. "We all talked to him at length this week," Clark added, "And we felt good about it." - Nationals Kris Kline and Roy Clark on Jake Johansen

Johansen was definitely on the Nats' radar if he was available. "When I called the kid up," Kline said, "He was so excited, I said, 'Are you as fired up as I am? I've been waiting all day for this pick,' and I'm glad he fell in our laps at 68. And as Roy said, there [are] just a few minor mechanical issues. He's a long-leverage guy. With a tweak with his glove hand, his front side, he gets exposed a little early. That helps. The other thing he does right now, he's a little methodical, a little deliberate and I think increasing his tempo is going to help a lot also."

"As far as the draft went," Roy Clark added, "I don't think we had any surprises, but it actually went as we had hoped. We were really hoping that we'd have a shot at [Johansen]."

Asked about Johansen's signability, Kline said simply, "We wouldn't have taken him if we couldn't sign him." 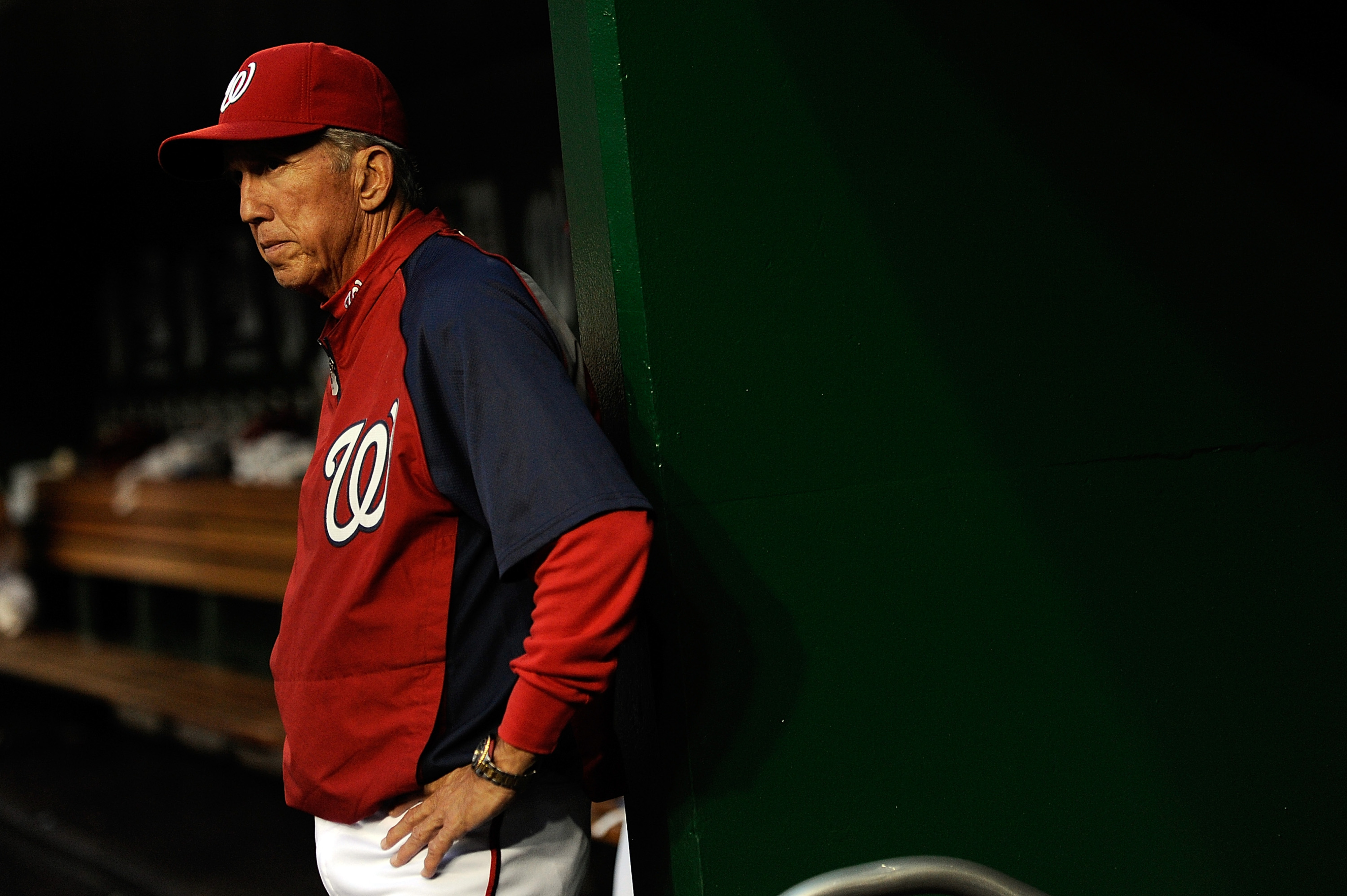 "We all talked to him at length this week," Clark said, "And we felt good about it. We felt like this kid wants to go out and like Kris said, I think we'll get it done."

How soon? Before the signing deadline? "I think that that is a very good chance," Kline said, "I think Jake's very excited to start his career and we'll get this done as soon as we possibly can."

"We feel like this guy's a great second round pick," Clark said, wrapping it all up, "And we feel that Rafael Soriano is a great first round pick."