Washington Nationals' manager Davey Johnson talked about some changes Ian Desmond made at the plate early in 2013, and how the adjustments reminded him of some Frank Robinson made when both Johnson and the former Nats' skipper were teammates in Baltimore back in the 1960s.

With this year-ending Top 5 list, we look back at five stories that for one reason or another were our favorites from the 2013 season. They aren't necessarily the biggest stories of the year for the 2013 Washington Nationals, but more stories that we were happy to be there to cover or stories that were fun to write, were unique or for some other reason stuck with us when the season was over. First on our list was Davey Johnson delivering "breaking news" to reporters about a scouting report Branch Rickey wrote on the then-21-year-old Johnson when he was still a prospect in the Baltimore Orioles' organization. The second story on our list featured Kris Kline and Roy Clark talking about the Nats' top pick in last June's draft. Our conversation with Gio Gonzalez was no.3 of 5 and no.4 focuses on a series of connected conversations Davey Johnson had with reporters that linked Ian Desmond to the no.20 he honors with the number on his own jersey, Frank Robinson.

When Robinson was honored for the time he spent as the Nats' manager (2005-2006) in 2012, he was asked about Desmond switching his number and said he appreciated the gesture from a player he championed and mentored when the '04 3rd Round pick was still a prospect in the organization.

"That's very nice of him to say that and he's worn it well and I [wish] him good luck with it for the future," Robinson said. "It's quite an honor." When Desmond struggled at the plate for a stretch early this past season, he diagnosed his own problems and told his manager, who recalled some advice he'd once given to Robinson when the two were teammates in Baltimore...

Washington Post writer Adam Kilgore and the WaPost staff's excellent analysis of Bryce Harper's swing has everyone talking about the preternaturally-gifted Washington Nationals' 20-year-old slugger's approach at the plate. The Nationals' PR team's official Twitter (@NationalsPR) noted this morning that Adam LaRoche has turned things around after a bit of an offensive slump and over his current seven-game hit streak, "... is hitting .524 (11-for-21)." If you, "Throw in his 6 BBs," the Nats note, "... Adam's OBP is .607 during the streak." It's a nice recovery for a veteran hitter whose offensive issues were a serious topic of discussion at the end of the first month of the season.

"I said, 'Other than being a little tardy and not a good fastball hitter, you're all right.'" - Davey Johnson on talks with Ian Desmond

After last night's game, however, it was Ian Desmond's success at the plate that Nats' skipper Davey Johnson was interested in discussing. The Nats' 27-year-old shortstop was 3 for 4 in last night's win over the Chicago Cubs with a double (his 12th) and a two-run home run (his fifth) that left Desmond with a .287/.298/.515 line at the plate on the year.

As the Nationals' 70-year-old skipper explained after Friday night's game, it was a little adjustment that allowed Desmond to get comfortable again after he'd gone through a bit of a mini-slump to start the second month of the 2013 campaign.

"You start inching toward the pitcher and then you start looking at your contact points and... it's always little things." - Davey Johnson on Ian Desmond and Frank Robinson

"I had a little conversation," Johnson told reporters, "Desi came up to me and [said], 'Why didn't you tell me?'"

In typical Davey Johnson fashion, he had a one-liner ready for his shortstop. "I said, 'Other than being a little tardy and not a good fastball hitter, you're all right.'"

"And he said, 'Well I moved up in the [batter's] box, and I kept wondering, I kept trying to shorten my stride,' because he had just been moving up in the box, they've been throwing him a lot of offspeed stuff," Johnson explained. "And I said sometimes you could do that subconsciously. You start inching toward the pitcher and then you start looking at your contact points and... it's always little things. Like, Frank Robinson did the same thing, started moving up and I said something to him and he went off... but [Ross Detwiler] pitched a good ballgame..."

Johnson veered off into a discussion of the Nats' left-handed starter's outing against Chicago, leaving the Frank Robinson reference hanging out there. It's something he's talked about before, however. Last summer, Johnson talked about watching his teammate with the Orioles closely during the time they spent together in Baltimore beginning in 1966.

"I knew where his toe hold was. I knew where he strided. I knew what bat he was using. I knew everything." - Davey Johnson on studying Frank Robinson's swing

"I watched Frank Robinson so close," Johnson said. "And everything he did when he came over [to] Baltimore. I remember one game, the first game of a doubleheader, he was getting jammed during the game and I knew where his toe hold was. I knew where he strided. I knew what bat he was using. I knew everything. In fact, it was because of him I went to a bigger barrel bat, and I told him the first game of the doubleheader, I said, 'You know, they've been throwing you a lot of breaking balls and your back foot's about six inches closer to the mound,' and I said, 'I think you're unconsciously creeping up because of all the breaking balls they're throwing you.'

Frank Robinson on D.C. And His Own History WaPost's Thomas Boswell: Nationals front office puts work to good use...

"And he just listened to me and then the next game I think he moved back because I know he went and hit a couple of home runs," Johnson laughed. 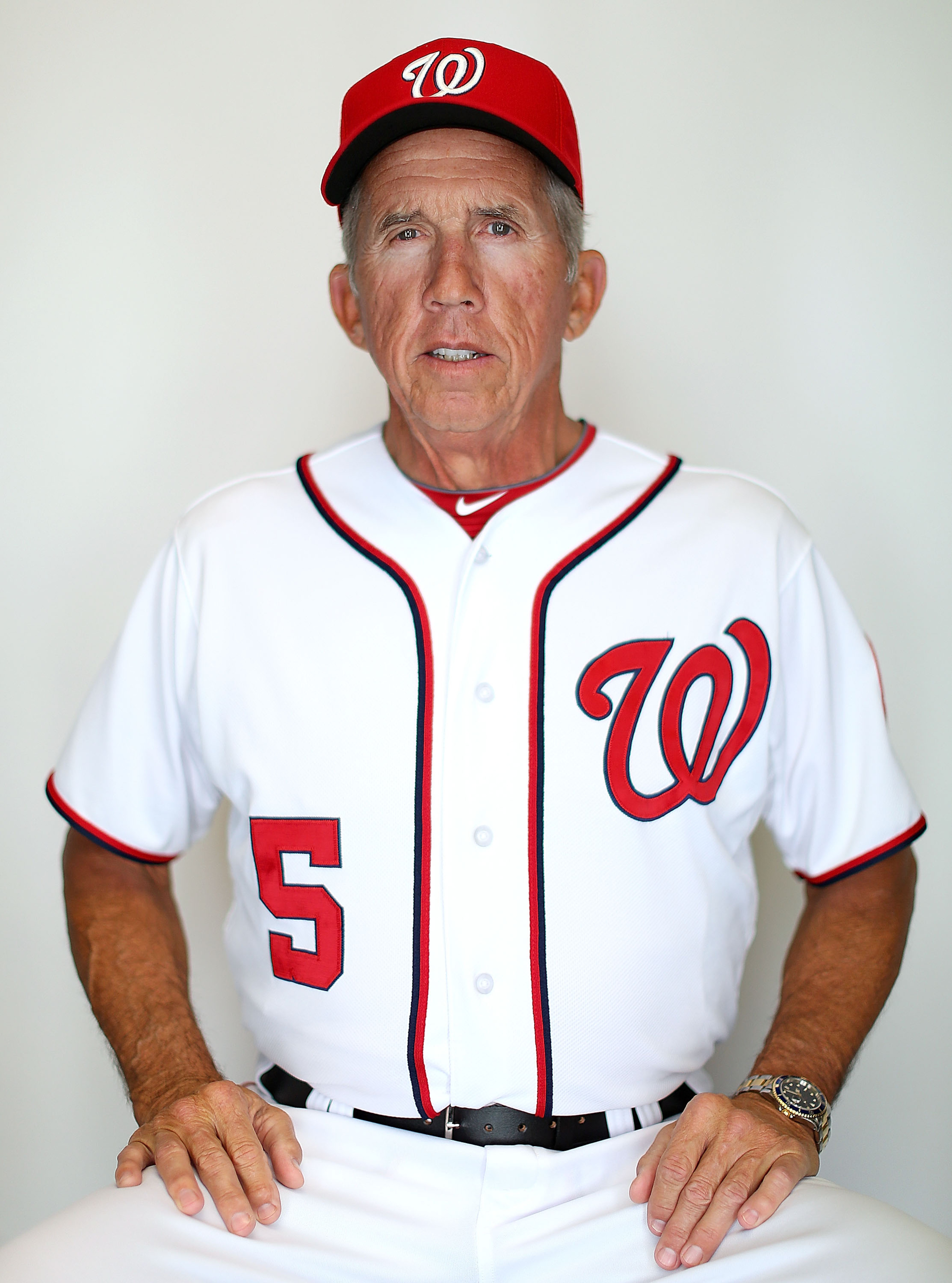 Ian Desmond, who wears the no.20 to honor Robinson, (an important figure in the Nationals and Desmond's past), apparently figured things out on his own. Johnson said he hadn't noticed that his hard-hitting shortstop had been creeping up in the batter's box. "I [hadn't]," the Nats' skipper said, "I'm a long way off. But he caught himself. He said that's why he was starting to shorten his stride. He noticed. But he's swinging the bat good."

A note from @eliassports on #Nationals SS Ian Desmond...Each of Ian's 5 home runs this year has given the Nationals the lead.

After a breakout year in 2012, Desmond's off to another strong start. Plus range. Plus arm. Hot bat. #steak