The big news around Major League Baseball last night was the Nationals' trade for former Detroit right-hander Doug Fister. Fister is a one of the better pitchers in the game. How does he do it, and what do Nationals' fans have to look forward to?

The Washington Nationals made a big splash last night by trading for Detroit's Doug Fister. Fister, who will be 30 when the 2014 campaign starts, is exactly the sort of pitcher any major league team would be happy to have. Many sources have already covered why the trade was a win for the Nationals, including Patrick -- who nicely cataloged the links you see here -- so I'm happy leaving that part of the fun to the talent. Instead, I'll focus on how the tall righty will help the Nationals where it counts.

As Dave Cameron at Fangraphs wrote, most advance metrics see Fister as the equivalent of Jordan Zimmermann and Gio Gonzalez, if not a little bit better. Here's the chart Dave put together, showing statistics over the last three seasons; all credit is his:

So first of all, the Nats just traded a lefty "prospect" (cue "there's no such thing as a pitching prospect"), utility infielder, and southpaw reliever for a Jordan Zimmermann. Or Gio Gonzalez. That is simply unbelievable to me. I thought about ending the article here, but as you may have guessed from my other ramblings, Reddington praises by the word, so on we go.

Here are of three of Fister's greatest strengths. It's no accident that each talent compliments the next.

Alright, so I combined two things. It made sense.

Fister is really, really good at avoiding free passes and getting looking strikes. For example, over the past three years, Fister is tied with Adam Wainwright for 8th lowest walk rate (4.9%) in the bigs. He also gets 5% more looking strikes (33%) than the major league average (28%). What is more, batters are simply not swinging at pitches in the zone.

This all means more opportunities to get ahead in the count, which Fister does more often than most pitchers. And it is important because Fister does not have what most would consider to be "overpowering" stuff -- he primarily works with a sub-90MPH sinker.  But this pitch plays a huge part in his control skillset too, as only Cliff Lee had a better strike/ball ratio on a sinker in 2013.  That's exceptional company.

He also knows how to gameplan.  Interviewing with Eno Sarris of Fangraphs in October of this year, Fister said that he prefers to attack hitters early in the count, and remarked that his elite control was "about repeating my mechanics and really just focusing on what I do." While his horizontal release point has gone more towards a three-quarters window over his career, he's shown a reasonably consistent horizontal release within individual seasons.

There's one other thing here. Fister's curve actually earned the 6th best swinging strike rate (42.75%) among qualified pitchers this past season, and the 8th best put away rate (27.85%). It's the proverbial cherry on top.

Add this all together: While he may not have the heat to overpower hitters late in counts, Fister limits the chances for hitters to do damage on his hard pitches (because they aren't swinging) while at the same time generating strikes with those pitches (the great control), and has a pretty respectable out-pitch -- the curve -- when he needs it. Best of all, Fister's adept enough to evaluate his strengths, and pitch to them.

Fister gets a ton of ground balls. Here's another excerpt from the excellent Sarris interview:

Doug Fister: That’s my main focus, really. I try to attack the hitter and get as bad contact as I can in the first three pitches. If I can do that, I feel I can go longer in the game and have more effectiveness throughout the game. I’m trying to be as efficient as possible, I’m trying to get every ground ball. If I could, I’d get 27 ground balls straight. If I didn’t strike anybody out, that wouldn’t worry me. Sarris: Does it ever worry you that a strikeout is always an out while a ground ball is *mostly* an out?

Fister: That’s where your team mentality comes in, you trust everyone behind you, and as long as you do your job and take the sting out of the ball, the defense will be right there for you.

Fister's career wOBA on ground balls is a paltry .238, which beats the 2013 MLB average on grounders (.244) by a little bit.  Keeping in mind that the overall MLB average wOBA in 2013 was .314, the point to take is that over the last two years, more than half of the righty's balls in play were basically akin to throwing 2013 Roger Bernadina into the batter's box. I love the Shark, but tell me that's not a promising matchup for any pitcher.

Pitch-wise -- and as you might imagine/know from some other articles around the Natmosphere -- his sinker, split and even the curve generate ground ball rates over 50%.  Fister features these pitches prominently. 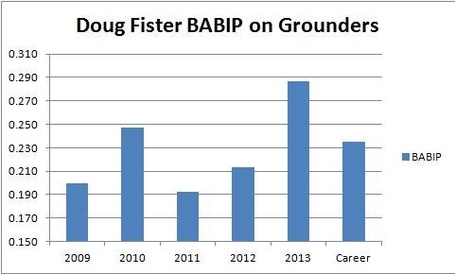 Here is a partial explanation why grounders got through. Below are Fister's singles and ground ball outs at Comerica Park, his former home. The light blue dots are singles, while the orange colored ones are ground outs. Because singles are recorded where the ball is fielded, we can see that plenty of singles ended up just beyond the reach of Detroit's shortstop and second basemen. And plenty were likely attributable to a certain third baseman's ability to track down bunts or slow choppers: 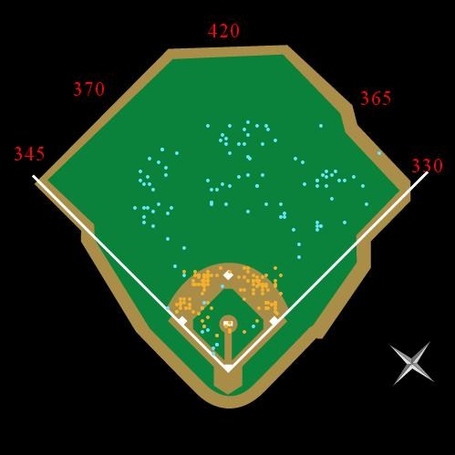 Viewed another way, the Tigers were close to the bottom of the league in defensive range run rating, which measures whether "[a] player is an Ozzie Smith or an Adam Dunn." Even by the eye test, I think it's pretty easy to conclude that Fister will benefit from pitching in front of the Nationals' infield defense next season. That's right: he can justifiably be expected to get better.

Lastly, Fister has rocked an above-average (in a good way) home run mark over the last four seasons. No surprise here, given his stellar ground ball rate and approach to working ahead. I think it's mostly this simple.

We can see how Fister's talents -- getting strikes, limiting walks and swings when pitches are in the zone, and having a credible out-pitch -- create favorable contact (specifically, grounders) that rarely goes for damage (just 10 of Fister's 103 ground ball hits this past season went for extra bases) and often goes for outs.

When you add in his mental approach, an understanding of Fister as a complete, top-flight starter really becomes more of an inevitability than a surprise. Some pitchers, like Stephen Strasburg and Clayton Kershaw, get results on a devastating arsenal of pitches and whiffs.  But there's more than one way to win, and I think Nationals' fans will see plenty of that next season.