In the fourth installment of the Nats' Pitching Daily Brief, we look at Pitchf/x and what it can tell us about pitchers and pitching evaluation.

Pitchf/x may be the most enjoyable pitching tool to use because it involves a lot of graphs and visual information. To understand most of that information, however, it helps to know how Pitchf/x does what it does.

According to Sportvision, the company that created Pitchf/x, the system "tracks and digitally records the full trajectory of live baseball pitches to within an inch of accuracy, enabling new forms of baseball entertainment and analysis for leagues, teams, broadcasters, and fans." Debuting in 2006, the system was installed in all major league parks in 2007 and has been refined each year to finer-tune measurements.

Two cameras inside each stadium are used to triangulate the position, speed, and movement of the ball. Alan M. Nathan, a professor at the University of Illinois and a highly-regarded commentator on the system, heralds Pitchf/x:

[its] data allow[s] us to record with unprecedented precision such quantities as the pitch speed and the location at home plate. But even more importantly, we have measures of quantities that we never had before. As a result, we now have new and novel ways to study the art of pitching.

Why a baseball moves during flight

The Magnus Effect, described by Issac Newton in 1672, is the distribution of air around (in this case) a spinning baseball, and the resulting movement of the baseball due to the envelope of air around it.

Here is a visual of the Magnus Effect to help out, courtesy of TexasLeaguers:

Because a curve ball spins in a forward fashion (snap a baseball between your middle finger and thumb for a do-it-yourself visual), the Magnus Effect also explains why, even in the absence of gravity, the curve ball has downward movement: there is no backspin to create lift like there is with a fastball or changeup. Instead, the slower air over the top of a curve pushes the pitch down after the pitcher's release.

Aside: be thankful that no one can throw at or close to the speed of light, because: this ("The answer turns out to be 'a lot of things', and they all happen very quickly, and it doesn’t end well for the batter (or the pitcher)."


What can Pitchf/x tell us?

Fangraphs is a good place to go to find numerical Pitchf/x data. I've included Stephen Strasburg's Fangraphs Pitchf/x page in different places below, and will explain certain numbers from left to right.

Below are the Pitchf/x pitch/run values for Strasburg as provided by Fangraphs.

The Pitch Type Linear Weights ("Pitch Values") section on FanGraphs attempts to answer the question, "Which pitch is a pitcher’s best weapon?" The changes in run expectancy between an 0-0 count and a 0-1 or 1-0 count are obviously very small, but when added up over the course of the season, you can get an idea of which pitch typically yields the best results for a pitcher. If one pitch is hit especially hard or a pitcher can’t locate one pitch for a strike, these problems will show up using Pitch Type Linear Weights. Also, if a pitcher gets lots of strikes and outs with a specific pitch, this success will show up.

You’ll notice that there are two different types of Pitch Type Linear Weights: total runs by pitch (which is shown as wFB, wSL, wCB, etc.) and standardized runs by pitch (shown as wFB/C, wSL/C, wCB/C, etc.). The first category is the total runs that a pitcher has saved using that pitch. However, it is tough to compare these total numbers since pitchers throw different amounts of each pitch. The second category corrects for this, standardizing the values on a "per 100 pitch" basis. In other words, when you see wFB/C, that represents the amount of runs that pitcher saved with their fastball over the course of 100 fastballs thrown.

To understand exactly how the values are calculated, all one really needs to understand is that strikes and outs lead to positive (good) values, while balls, base hits, and home runs lead to negative values. The value for each pitch represents the difference between the run value for before the pitch, and the run value after the pitch. Here is a more comprehensive explanation from Dave Allen if you want to check it out, and Dead Cat's Bounce looks at the actual run values by count if you want to actually see what they look like (2009 data).

Keep in mind sample size - if a pitcher only throws a pitch 3-0, when hitters often take, he can rack up positive values for strikes, or much greater negative values for balls. But this doesn't really reflect how effective a pitch is, and for that reason, quantity of pitches is important.

Additionally, run values can overstate the actual quality of a twirler's offering. Beyond the Boxscore uses R.A. Dickey as an example for the proposition that, although he has a great knuckleball, his fastball often has a high run value because

batters facing a knuckleballer aren't expecting the fastball so they let the pitch go by, where it's nearly always a strike. Thus when you look at run values, the fact that a pitcher's less used pitch has a better run value per 100 pitches DOES NOT MEAN that the pitcher is using his pitches inefficiently.

So, a pitch may be good, but that fact doesn't necessarily mean a pitcher should start going to it a lot (remember game theory!).

Look over at the two columns almost all the way on far right: x-mov and z-mov. I'll focus on those to start. Also, note that Pitchf/x measures movement without the effect of gravity on the baseball. If you're like me, this can be difficult to imagine. But, it makes sense -- with gravity, and not to sound ridiculous, everything is going to fall. Pitchf/x just neutralizes that effect.

Anyway, visualize a spinless pitch traveling straight from 55 feet out (the point where Pitchf/x begins to measure) to the middle-middle part of the plate -- "center cut" as Bob and F.P. say -- to get a pitch with 0, 0 movement.

By the way, here are the abbreviations listed above and their pitch associations:

And here is a link to Strasburg's grips for these pitches.

x-Mov measures horizontal movement in inches across the batter's box area. To understand which direction negative indicates, pretend you are the catcher. From this perspective, anything that breaks in to right handed hitters from the middle of the plate is classified as (-), whereas pitches moving towards left handed batters from the view of the catcher are (+) values.

So, horizontally, Strasburg's pitches mostly move in towards right handed hitters. The exception, his curve, breaks in to left-handed batters, so it's x-mov value is positive: 7.7 inches of break in to lefties.

z-Mov measures vertical movement in inches across the batter's box area. For z-Mov, a positive value indicates lift in the absence of gravity, whereas a negative number indicates a downward movement opposite of lift (weight? Unsure if that's the proper term).

These numbers compute: Strasburg's fastball offerings and change up have positive values, because they generate lift. And a z-Mov of -6.4 confirms what everyone already knows: his curve drops a lot, although only slightly above league average (Strasburg's 2012 movement placed him around 37th out of 86 in the league, where the maximum value was -10 for Tommy Hanson and, amazingly, +1 for Francisco Liriano).

The below charts plot Strasburg's vertical and horizontal movement to correspond to the averages above. Note that the source, Brooks Baseball, manually categorizes every pitch. This explains the distinction with "FT" in the Fangraphs classification and "SI" (which is a sinking fastball) in the Brooks' classification. I'm going with Brooks, but the movement is the same.

We see again that the fastball and change-up offerings break in to righties, and that they almost always have a positive (or upward) vertical movement. On the other hand, the curve breaks down and away from righties. Same information, more samples, less numbers than above. Keep in mind these only represent movement, and not necessarily where a pitch ended up and whether that offering was in the strike zone.

WHAT MOVEMENT IS GOOD?

Succinctly, current research finds it unclear. Although some work has been done, one prominent Pitch F/x researcher cautions that "we're far from having the final answers at this point."

Nonetheless, there is some information out there that can help us understand at what value horizontal and vertical movement becomes favorable to pitchers. Bringing run values, discussed above, and movement information together can be helpful. Dave Allen at the Baseball Analysts examined fastball movement and associated run values in this 2009 article.

Unfortunately, I have been unable to find an updated version of this promising work, and the relative downswing in offense league-wide since 2009 makes me think that applying these values may overstate the effect of pitches in certain locations. To account for the reduction in offense, we may do well to slightly adjust our expectations down from these values.

The charts show the run value at various points across the horizontal and vertical movement spectrum for right-handed pitchers who throw a fastball against both right and left-handed batters. For quick reference purposes, red indicates a more favorable result for the pitcher, while blue indicates the opposite:

In same-handed at-bats the more vertical 'rising' movement the better. This trend is not unexpected, but strikingly consistent. For these same-handed at-bats horizontal movement has very little effect. In opposite handed at-bats a large central region of pitches has a very high run value. These fastballs have 'average' movement, and left handed batters have no trouble with them.

As noted in the pitch values section, there are some drawbacks to combining information: context can be lost, and small samples may be exposed. Still, this is something. And comparing Strasburg's fastball to 2009 data, it looks like he is just shy of the extreme red area against right-handed batters, which corresponds with his good-but-not-great fastball run value data.

The far three columns have the bulk of our focus, and are pretty straightforward: we get the minimum, maximum, and average speed for Strasburg's four pitches. But also keep in mind the total number of pitches in the third-most left column when facing sample size issues. Strasburg has enough data to say he can bring it, but these also come in handy when evaluating the value of his pitches.

Pitchf/x also allows for some pretty cool graphs to show velocity. First, here's the average data that corresponds with the above numbers for Strasburg, as displayed on Brooks Baseball: 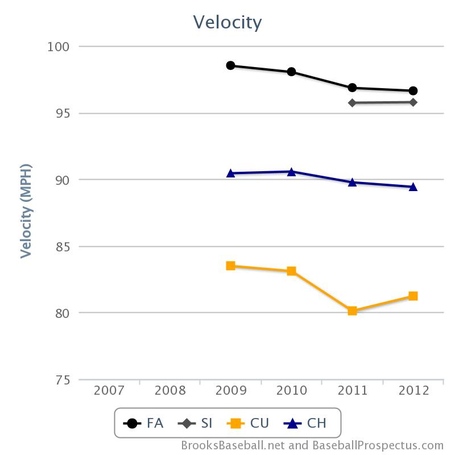 Next, we can see more game-by-game data using either Fangraphs (for one pitch) 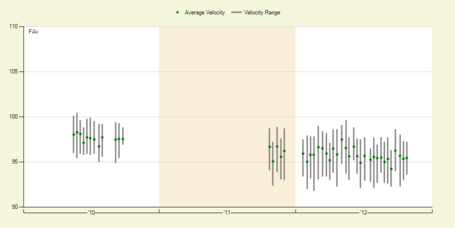 or Brooks (for all pitches each year):

Although Strasburg's velo appears down across the board since '09-'10, I wouldn't be surprised to learn that some of that is a consequence of his trip back from Tommy John surgery, perhaps also combined with a tactical pitch-to-contact approach. And it's still elite velocity for all of his offerings.

Before making conclusions based on information like that shown above, keep in mind that velocity and movement readings can vary by stadium.

Values, movement, and velocity are the at the core of Pitchf/x assessment, but are certainly not the only tools to use.

In the final Pitchf/x article and pre-season PDB on pitching evaluation, I'll look at Heat Maps, Pitchf/x matchup analysis, pitch sequencing graphs, BP pitcher profiles, and more - with plenty of visuals and cool information to use throughout 2013.