For the final pre-season Pitching Daily Brief, we look at some other Pitchf/x tools to help assess pitcher performance.

It may be early in spring training, but Reddington is already in mid-season form posting and news-wise. He clearly has come to camp in the "best shape of his life" and is "ready to get things going." No word on Doghouse, but I hear he may have some credential issues. I am sure those will be worked out in time for his usual Win Probability awesomeness.

In the final pre-season PDB look at pitcher evaluation, I've chosen a few of the newer and more helpful Pitchf/x tools to use when trying to get the word on a particular pitcher.

Fangraphs explains that heat maps "represent where a pitcher threw a particular type of pitch the most often." Fangraphs' heat maps draw their pitch classification data from MLB Advanced Media, which means that one may see some inconsistency between MLBAM labeling and that of Brooks Baseball (where they classify their own material by visual observation, rather than using an algorithm like MLBAM). 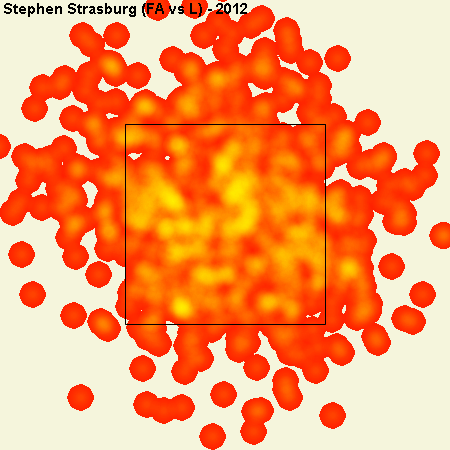 What information does this map display? First, heat maps use the catcher's perspective, like other similar visuals. Second, the greater the intensity of color (from redish-orange at the low end to light yellow at the other), the higher the frequency of pitches in that location. That's really it -- we don't see velo, movement, or results.

With the fastball against lefties, Strasburg most often attacks across the middle third of the zone, working in and out frequently, but also going middle-middle too. If he's not working that area, he's most likely offering lefties the heater down, or possibly upper-middle of the plate.

Now, here is his fastball usage against right-handed hitters in 2012: 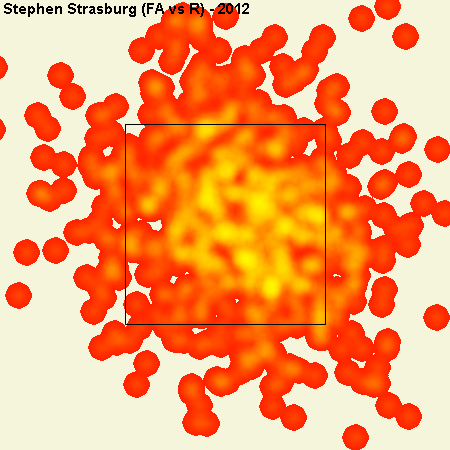 A more clear pattern is visible here. Strasburg works righties away more often than he works lefties away, while also hitting the upper and lower portions of the zone more frequently. Reduce the point size and switch the image over to "rainbow" format to really see the contrast: 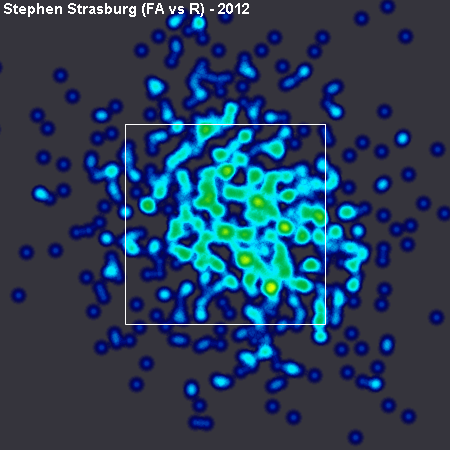 Away's the place wherein Zuk catches the heater, at least against same-handed batters.

Heat Maps are helpful to visualize location and frequency quickly and relatively easily. But we can pair these with other visual information to get a better idea of why Strasburg locates where he does as often as he does.

Here is where pitcher information starts to get more comprehensive and helpful. Baseball Prospectus and Brooks Baseball teamed up create BP Pitcher Profiles, which offer a visual display of the strike zone overlaid with a variety of stats and colors for pitchers (and hitters, as we will see).

These graphs draw on Pitchf/x information, just like the heat maps above. Noting that "location is perhaps the most important attribute of a pitch," Pitchf/x gurus Harry Pavlidis and Dan Brooks believe the tool "will revolutionize the way people look at PITCHf/x data."

Once again, we'll use Strasburg as an example. Here is his BP Pitcher Profile, sorted first by batting average against righties in 2012 on his four-seam fastball. Keep in mind we are only assessing instances where the ball was struck or where there was a strikeout, and not the overall frequency of heaters to righties:

Strasburg was most successful when he located his fastball away and the hitter attempted a swing, either making contact or striking out (yielding a "result," as I'll call it). For as (relatively) infrequently as he went inside with the heater overall against righties, he often had a result on those pitches. On results middle-in and upper-in, Strasburg allowed one hit over twenty-three results. As Larry David likes to say, "that's prettay, prettay good." But just a little bit lower, and the story was different. Lastly, it probably is no surprise to see batters have the greatest success on offerings over the middle, even when Strasburg unlimbers 97+ MPH cheese.

Here's a look at Strasburg's whiff rate on fastballs against righties in 2012:

Strasburg ranked in the top quarter of starers in 2012 on heater whiff rate, registering an 18.9% mark (Yu Darvish led the Majors with a whiff rate of 27.76%). This offers a bit more of an explanation as to why Strasburg does not go inside with the four-seam against righties more often: Although he has a low batting average against in that area, he isn't earning those outs with swings and misses all that often, generating only 4 whiffs on 53 swings.

Sure enough, at first glance the BABIP gods appear to have been kind to #37 on inside fastballs to right-handers:

Recall from earlier in the series that pitchers who get a large number of ground balls will have lower BABIPs than pitchers in the middle of the pack. How did Strasburg rank on worm-burners? Well, he was 66th out of 118 in the league when sorting by fastball grounder rates, getting them at a 33% clip. We see he was slightly above that mark on inside pitches, generating 11 grounders on 28 batted balls:

So, when using his fastball inside against right handers in 2012, we can say:

Dealing with uncertainty is a huge part of pitcher evaluation, and it is a fool's errand to offer 100% confidence when projecting future or explaining prior performance. But, there are still cool things to see with Pitcher Profiles. For example, Strasburg:

How about Strasburg against individual batters?

Baseball Prospectus/Brooks Baseball brings it again with individual pitcher/batter matchup pages. Here is how Strasburg has faired against Nats nemesis Jimmy Rollins of the Philadelphia Phillies:

Strasburg has balanced his approach against Rollins, going with 60% hard stuff versus 40% off-speed (all sample size caveats considered). And, excepting Rollins' last at-bat on July 31, 2012, he's had great success.

One can also see that Strasburg prefers to attack Rollins, a lefty, outside more often than his fastball heat map suggests for all lefties: 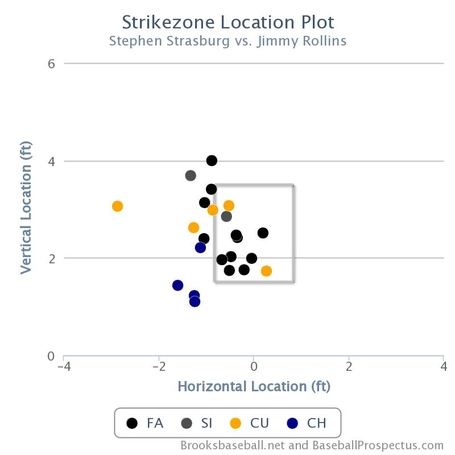 Other images on the screen also show that Rollins sees more first-pitch fastballs and curves than the average lefty against Strasburg. How did Rollins do against outside fastballs from right-handed hurlers in 2012? Yea, BP also does hitter profiles:

The Nationals' 2009 first round pick played with a little bit of fire when he worked middle-middle and lower-middle of the zone, and less so middle-away. Where did Rollins burn him? Have a look for yourself:

(In case the video doesn't appear, it was borderline middle-middle/middle-away). Because of small sample sizes, it's a good idea to take some of this information at face value. At the same time, as Christy Mathewson explained, sometimes you just pitch certain guys certain ways when you're getting good (or bad) results.

Last but not least, let's learn about pitch sequencing on a more macro scale.

Pitch sequencing helps to determine a pitcher's plan of attack against batters.

What you see below at the top of the sequence tells us "whether the pitch is in the strike zone; where it’s located in (or out of) the zone (if its location can be specified); and finally, the type of pitch, which can be as specific as an individual pitch type or as general as 'Hard Pitch' or 'Any Pitch,'" according to BP.

Strasburg's top-ranked right-handed hitter sequence shows that he would thow back-to-back four seam fastballs high and out of the zone, but over the plate. The more red the blocks in the sequence, the more often he used this pattern. So, in 2012, he started fastball up/fastball up frequently early in the year, then adjusted his approach about midway through the year.

The below chart shows how Strasburg fared on this sequence. In 2012, he saw early returns of strikeouts, walks, and line drives. This may not be that surprising considering the sequence: either guys chased and got themselves into a hole, or didn't and either got something to hit or took a walk after earning two balls. But a little later in the year, he got a lot of fly balls (again, intuitive, because when hitters swing at high pitches they improve the chances of a fly ball).

There is more information on Strasburg's player card, and not enough room within these pages to discuss it. Check it out and see what you find -- it is an enjoyable experience.

With that is my look at the litany of factors that aid in evaluating pitchers and pitching performance. In-season PDB's will be more brief, incorporating things from this series at different times. And if the community wants to see something in particular, just let me know.