In 2012, Jordan Zimmermann largely duplicated his 2011 success. In the final Nationals-oriented Pitching Daily Brief of the pre-season, we look at Zimmermann's prospect pedigree, scouting assessments, interviews and statistics to evaluate his prior, current, and future pitching performance.

Jordan Zimmermann's performance in 2012 was largely similar to his play in 2011. Each season, Fangraphs had him at or close to +3.5 WAR. And, notwithstanding Baseball Reference's differing values (+2.8 and +4.4 for 2011 and 2012, respectively) (edit: they just unified), many other statistics were similar, too. Indeed, Zimmermann's back-to-back above average years have many predicting a "breakout" year. How likely is this?

Before the 2007 First-Year Player Draft, Zimmermann was on Baseball America's radar. This was the case at least since he earned Region Most Valuable Player honors during the Division III College World Series while attending the University of Wisconsin at Stevens Point. In a May 2007 chat on Baseball America's website, Aaron Fitt stated that he believed Zimmermann's low 90s fastball and plus slider would merit a second or third round selection.

Fitt was right. The Nationals selected Zimmermann in the second round of the 2007 draft, with the 67th overall pick. Debuting in low-A ball, Zimmermann racked up strikeouts and boasted an impressive 2.57 ERA and 2.18 FIP. Moved up to high A in 2008, he continued to succeed by earning K's and largely limiting walks.

By 2009, Zimmermann was making appearances on prospect watchers' radar. In February 2009, Baseball America pronounced him the 41st best prospect in the game. Two months later, a scout told the Washington Post's Dave Sheinin that he believed

[Zimmermann's] going to be a solid rotation guy—or maybe better than that. He has the potential to be a [number] 1 or 2. If I had to pencil him right now, I'd call him a 2. But I tell you, if they draft [Stephen] Strasburg and get him signed, and if this kid [Zimmermann] does what he's supposed to do, that's a hell of a back-to-back.

In what could only be described as an effort in humility, the author of the article who relayed Sheinin's conversation stated that Strasburg and Zimmermann would be at the front end of a potent rotation:

John Lannan would then become the No. 3 starter, which is what most scouts believe he is. Add Scott Olsen and Shairon Martis and the Nationals could have a formidable rotation, and sooner rather than later.

Zimmermann debuted to measured optimism in 2009, striking out over a batter per inning, but with a 4.63 sported a tight end's 40 time for an ERA. The excellent Adam Foster of Project Prospect -- also the homepage of the Anthony Rendon fan club (sorry, and at the risk of a train wreck in sentence syntax, I can't let those links pass without mentioning how hypnotic Rendon's swing is in the .gifs, and also how approachable Project Prospect's analysis is) -- scouted Zimmermann after he made his major league debut, concluding that

Zimmermann's a very unique pitcher. I've never felt so comfortable endorsing a guy without much of a changeup. I was really impressed with his ability to pound the strike zone. His command is better than I expected….I'm not sure he needs to bother with a traditional changeup at this stage of his development….he's a safe bet to stick as a big leaguer. The Nationals absolutely stole him in the 2007 Draft.

Sadly, after suffering a torn UCL later that year, Zimmermann underwent Tommy John surgery. Upon returning to the mound in late 2010 and early 2011, Zimmermann told a local radio show that he alternated "feeling" between his slider and curve; basically, his slider went away on him after surgery, the curve emerged, but then the slider feeling came back.

Zimmermann adjusted to the vagaries of rehabilitation and pitched quite well in 2011. In addition to his statistical performance, he changed his approach somewhat. As Patrick pointed out in 2011, General Manager Mike Rizzo wanted him to consciously dial back the strikeout numbers so that he was more economical during games. Zimmermann himself also stated that he could further improve in 2012 by working on his change-up, remarking that "I hope I can figure it out come this offseason. I found a pretty good grip that I feel comfortable with the last month here, and I'm excited to start throwing all offseason."

Zimmermann has again renewed his pledge to go to the change more, and so far this spring, he admits that he has. This adjustment has the potential to be important for the reasons that follow.

As the chart shows, his velocity was pretty consistent between 2012 and his career figures. But that's not all that was mostly the same. Compare his pitch movement with gravity for both years, with 2011 being the starting image (clicking will allow you to compare movement in the same position each year; measurement is in inches...and yes, that's around and over 4 1/2 feet of break on a hook in the time it takes to read these last four words):

As you can see, his movement in 2011 and 2012 was largely the same, with the slider a little more tight horizontally while occasionally achieving greater depth, and the curve offset slightly less horizontally.

Here is Zimmermann's pitch selection in 2012:

If you're a left-handed hitter, three out of four at bats you're going to see the hard stuff early, and when you're ahead in the count. Righties must be a bit more reserved, and late in the count Zimmermann prefers to go to a breaking ball. Keep some of this count data in mind as we go forward.

Zimmermann achieved a +3.5 fWAR and +4.4 bWAR in 2012. Again, you'll note how he was pretty consistent by most measurements with his 2011 performance:

So you probably get the point. His ERA and FIP were both above-average, and by WAR standards Zimmermann wasn't far from an "all star" designation: It was two really solid years.

Zimmermann showed an ability to work ahead of batters, besting the Major League average in first-pitch strikes by 10% last year (69% to 59%). This helped him to 10% more 0-2 counts than the average pitcher, too (33% to 23%). On the downside, opposing hitters stole successfully all but twice, taking 10 of 12 bases. On the year, the average success rate was around 73%, but it's unclear whether this is more on Zimmermann's end, or Ramos/Zuk/Flores.

Zimmermann's fastball and slider were his best pitches last year, saving 11.3 and 6.9 runs respectively. In fact, on a rate basis, the slider was the more valuable pitch because it approached nearly a run saved per 100 pitches thrown.

If you're looking to differentiate between Zimmermann's 2011 and 2012 while also looking to figure out where he can improve, you have to get into the weeds a little bit I think.

Let's start by looking at Zimmermann's splits. #27 shows a reverse platoon split, which means he pitches better against opposite handed hitters. This is somewhat unusual. By sOPS+, we see this: 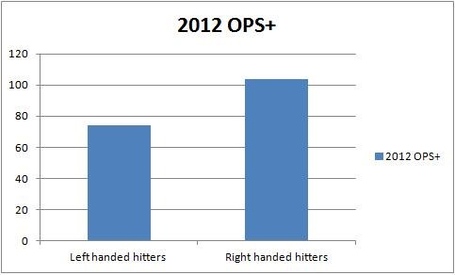 Something else is interesting, too, and that is Zimmermann's performance against opposing batters in 1-2 and 2-2 counts. Bluntly, it was pretty bad last season. OPS+ also helps to understand this. It measures how far above or below league average a player was using a "100" baseline (the league average). For a pitcher, a number above 100 indicates worse performance than league average. sOPS+ is OPS+ for a particular split, like above (hitter handedness) and below. Note the values in the right-hand column:

In 2011, Zimmermann was 13% worse than league average on 1-2, and 47% better than league average on 2-2. In 2012? Way worse (by 63% and 69%). And in total both counts represent 240 of 782 total at-bats against the Wisconsin native, or 30.6%. In other words, in nearly a third of opposing at bats he was getting below average results. It's a reasonably meaningful sample in this regard (again noting appropriate cautions).

Here's a breakdown of some statistical components in these counts against the league average:

Certainly, OPS values of .547 and .623 aren't otherworldly, but it's the performance relative to league average that highlights where Zimmermann can improve. Indeed, over a quarter of the runs he allowed came on either 1-2 or 2-2 counts (19/69, or ~27%, if you're doing the math).

Remember earlier where we saw Zimmermann shy away from the fastball when he was ahead in the count or with two strikes? Against left handed batters in 1-2 and 2-2 counts, Brooks Baseball shows us he goes to the heater even less, at 50% and 51% respectively, than he did with two strikes generally against lefties (55%). Recall lefties were frustrated by Zimmermann in 2012, and make of that what you will.

The other figure in the chart above that stands out is Zimmermann's batting average on balls in play. This figure is higher in part because he was giving up more line drives with his fastball and slider in both counts as against his 2012 average, which the following chart shows: 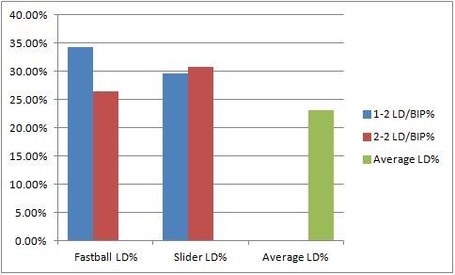 Obviously, with two strikes, batters can strike out. And when a pitcher is performing poorly with two strikes, one may wonder if they are lacking in punch-outs relative to their peers. It turns out that Zimmermann is. What you see below charts Zimmermann's strikeouts per plate appearance ("K/PA") on 1-2 and 2-2 counts against the league average rate. I also included the overall average for both Zimmermann and MLB pitchers at the end for comparisons' sake (2012 data).

I'm unsure whether Zimmermann maintains his pitch to contact approach with two strikes; I'm inclined to think not, because he's already at a point a pitch to contact strategy could seek to avoid: A two strike count. At the same time, perhaps he feels he already has a batter in a defensive posture at 1-2 or 2-2 and is inclined to not be too "fine" in executing these two strike offerings. So, he maintains a pitch to contact strategy and doesn't attempt to induce chases. Perhaps a little of each; both options seem reasonable enough. In any case, considering he is around league average in K/PA generally, it's a little curious why he didn't ring more batters up in 1-2 and 2-2 counts.

Pitch location data by count is not easily obtainable, particularly for just 2012 (that I could find, at least). However, I wondered whether Zimmermann gave up an above-average percentage of home runs in these counts (which information I could find).

I also looked up each of the four home runs to see if any were cheapies. ESPN's Home Run Tracker shows that just one of the four was. I've included the relevant info and videos below.

Painful, sorry. Freese's hit was probably a double, and with no outs, even pretending he didn't go deep probably wouldn't affect Zimmermann's overall 1-2 and 2-2 numbers that much.

It's pretty nitpicky to single out Zimmermann's performance on 1-2 and 2-2 counts, but the fact that it took nitpicking to find somewhere he could improve is pretty great. And he doesn't exactly need outstanding performance there to approach the stats to be a 4-5 WAR (read: near ace) pitcher in 2013; average will do.

I believe this is where the change-up can play a role.

First, although change-ups aren't often thrown to same handed hitters, I think throwing one to right handed batters could be effective simply because it's the last thing on their minds when preparing to face Zimmermann. This appeals more to the game theory idea and its decision-making value. If effective, the change-up helps address his reverse platoon split, but I admit this is far from a certainty.

Second, dropping a change in 1-2 and 2-2 counts forces batters to reckon with an additional pitch, with different speed, trajectory, and movement. If batters were -- for whatever reason -- better able to hit Zimmermann's offerings in these counts before, a change-up could be just the remedy to get him back down to league average, or better, by inducing whiffs or weak contact.

In conclusion, keeping his peripherals consistent for the third year appears possible since nothing was significantly out of whack or really odd between '11 and '12. If Zimmermann's claim to focus on offerings down in the zone continues to help limit his home runs, we can actually see how the change-up can be a meaningful vehicle for improvement in 2013 across several statistical categories, namely versus right handers and in 1-2 or 2-2 counts.