Ricky Nolasco takes the mound against the Nationals to kick off the 2013 baseball season. Nolasco's broad repertoire has yielded increasingly fewer strikeouts. He sports modestly consistent peripheral numbers, and has contributed favorably to the Marlins since 2008. However, his stuff plays to the Nationals' strengths, and for that reason, there is reason to expect a curly W to start the year.

Opening Day 2013 for the Washington Nationals is here, and with it the expectations of a deep run into October. Undoubtedly, the Nationals' players will be the first to tell folks that great seasons are put together one game at a time. Consistent with that, I plan to offer a Pitching Daily Brief for an opposing starter each series during the year. Opposing the Nationals in game 1 is Ricky Nolasco of the Miami Marlins.

Drafted in 2001 by the Chicago Cubs, Nolasco debuted with the then Florida Marlins in 2006. Nolasco's first good year was in 2008, where he pitched to the ERA/FIP/xFIP triple-slash of 3.52/3.77/3.69, accumulating +3.9 fWAR. He got an above-average number of strikeouts, limited walks, and turned a bunch of his fly balls into outs.

2009 saw Nolasco rock a 5.06 ERA, imbalanced significantly by his 3.35 FIP and 3.23 xFIP. As you may have guessed from his FIP and xFIP, his underlying strikeouts, walks, and to a certain extent his HR/FB value all pointed towards a much better performance than Alan Jackson's favorite time of day. So, despite a high ERA, he still registered a career-high +4.1 fWAR (because Baseball Reference does not use FIP in its WAR calculations and instead evaluates by runs allowed, it saw a pitcher who was worth much less -- only +.7 bWAR).

Nolasco's strikeout numbers have dropped off a cliff since 2009, while his walks have remained fairly consistent:

Marlins manager Mike Redmond implicitly seems to recognize this in describing Nolasco as someone who "know[s] how to pitch." If you're not striking out an above-average number of batters, and aren't limiting walks at an elite level, you'd certainly better know how to pitch. Considering both strikeouts and walks, he's just about league average at the end of the day -- below the mean with regard to strikeouts, but above the mean with regard to walks.

Notice how much he's gone away from the fastball since earlier in his career: 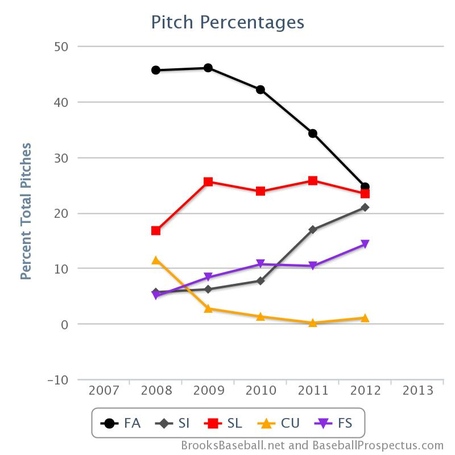 Back to 2012. Nolasco generally favored hard stuff last year, despite not having the elite velocity of a Jordan Zimmermann, Gio Gonzalez, Ross Detwiler, or Stephen Strasburg. That these offerings were "only" coming in in the low-90's may also explain why batters were able to tee off on both the fastball and sinker (especially the fastball).

Situationally, Nolasco abandons the sinker when ahead in the count or with two strikes. This is in favor of a more slider-heavy diet for right handers, and a splitter preference when facing left handers. On the flip side, 59% of the time he throws a fastball or sinker when lefties are ahead in the count. Denard Span, Bryce Harper, Adam LaRoche, and Danny Espinosa should therefore have opportunities to feast if they work into favorable hitters' counts.

Nothing from Nolasco's 2012 batted ball profile jumps off the page; noting that, he had a more favorable HR/FB rate than the average major league pitcher last year:

Again, most of these values track league-average performance. Nothing elite.

Nolasco throws a first-pitch strike 62% of the time, 3% greater than league average. Like most pitchers, he did his best work (relative to his own performance) when he was ahead in the count. We've seen how Nolasco will likely approach many of the lefties tomorrow -- fastball/sinker early, splitter late, with some curves mixed in when he's ahead in the count -- but what about right handers? After all, Nolasco performed 31% better against righties than lefties last season, as supported by his 5.42 K/BB rate against hitters of that handedness (he put up a far more pedestrian 1.71 against lefties). 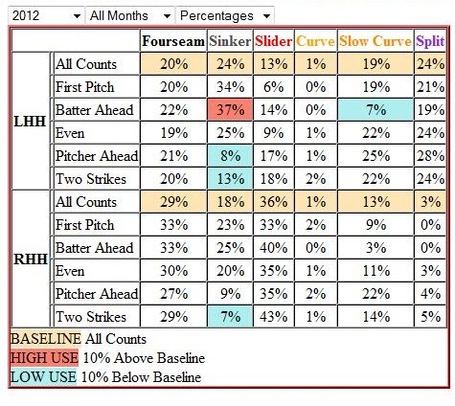 Whether he's even, ahead in the count, or behind in the count against a right handed hitter, Nolasco will go to the slider. Overall, righties swing at this pitch about 52% of the time, and when they swing, those batters whiff about 31.5% of the time.

Why is this significant? According to Baseball Prospectus Pitchf/X statistics and my own math (buckle up), the average whiff rate on sliders thrown to right-handed hitters for pitchers who threw more than 200 sliders last year was 32.3%. Pretty attenuated, to be sure, but the slider appears to be Nolasco's go-to by usage, and he's just "meh" there.

Even as his go-to offering against right-handers, the slider isn't very effective relative to his peers. We can see this by plotting strikeouts and Put Away %, which measures the percentage of two-strike plate appearances that ended in strikeouts. The following chart should be pretty telling; the threshold to make the sample is 500 sliders to righties during 2012: 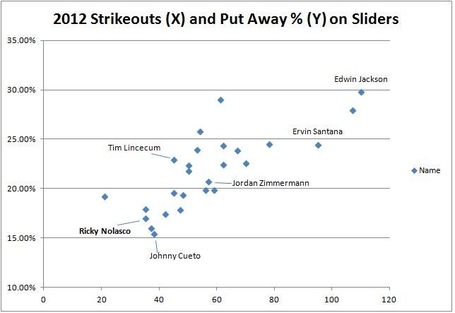 Nolasco doesn't generate punch-outs against right-handers relative to other major league pitchers who use the slider as frequently as he does. It wasn't really a wipeout pitch, and the following chart, which displays righties' batting average against the pitch, shows what happens when you don't get strikeouts or outs (view is from catcher):

More often than not, the slider ends up in the zone, and in those cases (in addition to some outside the zone), it's put in play for a hit. He doesn't come inside, and the pitch was best when used low and away, but still in the zone (I'm guessing that the 3/8 in the bottom right is BABIP-aided with such a small sample).

Finally, here is where Nolasco was hurt the most in 2012. The following chart measures slugging percentage against all of Nolasco's pitches by both righties and lefties:

It's not entirely red -- and it appears offerings middle-in to righties are fairly successful -- but it does show pitches which are frequently being hit hard both inside and, to a smaller degree, outside the strike zone.

Lack of elite velocity, a below average out pitch relative to other pitchers in the league, and average peripherals makes for a fairly average pitcher. This is no slight; average major league pitchers are valuable assets when paid accordingly and can make a meaningful contributions over the course of the season.

Compare Nolasco's profile to that of the Nationals' hitters, though, and you know about how in 2012 the Nationals pounded fastballs to the tune of 6th best in the league by run values, and hit curve balls (5th best in the league) even better. Although they "hit" sliders to a -8.2 run value, that was still a top-10 league-wide performance; only two teams had positive values against the pitch.

So that sets the stage: Nolasco is not bad, and while that's something, he is the type of hurler the Nationals are capable of beating (and should beat). This is because even in favorable counts, Nolasco lacks a high-quality out pitch, and that offering indeed has been hit hard in the past. Furthermore, when he doesn't work ahead against lefties, it works in the batters' favor because Nolasco will most likely go to the hard stuff -- and the Nats generally hit that.

Regardless of what happens, baseball is back. And that's a great thing for everyone.