Washington Nationals' Davey Johnson and Mike Rizzo On Ryan Zimmerman On 106.7 The FAN In D.C.

Davey Johnson and Mike Rizzo had pretty much the same opinions on the throwing issues Washington Nationals' third baseman Ryan Zimmerman has been experience again early this season, but neither the manager or the general manager seems to think it's anything but Zim finding himself after surgery.

Share All sharing options for: Washington Nationals' Davey Johnson and Mike Rizzo On Ryan Zimmerman On 106.7 The FAN In D.C.

If the Washington Nationals are concerned about Ryan Zimmerman's throwing issues they're not saying so publicly, though really, does anyone expect they would even if they were concerned? Nats' skipper Davey Johnson addressed Zim's shoulder and throwing woes after last night's loss, telling reporters he's thought all along a full recovery following shoulder surgery could still be months away. "With what he went through over the offseason and the rehab he's had," Johnson explained in his postgame press conference, "I said it was going to probably not feel completely comfortable until probably June. But he's made a lot of great throws. And a couple of them made mistakes and guys hit the ball out of the ballpark and that kind of exacerbates the error, but if we do what we're capable of doing around an error that doesn't ever happen. It just magnifies it."

Johnson reiterated his position on the Nats' 28-year-old third baseman in an appearance on 106.7 the FAN in D.C.'s The Sports Junkies this morning. "It's always magnified," Johnson repeated when asked about Zimmerman's error in the fourth inning last night, which indirectly led to the Fish scoring four. "I know where you're going, it's always magnified. But let me tell you, [the deal] on a team, you pick each other up. Pitchers, if we make mistakes behind them, they pick us up. A lot of times, we make great plays behind them and nobody says anything about that, but we just didn't make pitches after the error and that's what hurts." [ed. note - "I think Davey's infield bias against pitchers just came out."]

"It is a little different arm slot because with the impingement up there, he wasn't able to get the arm up top..." - Davey Johnson on Ryan Zimmerman

Asked specifically about Zimmerman's throwing issues, Johnson broke down what the problem has been for the nine-year MLB veteran and former Gold Glove winning third baseman. "It is a little different arm slot because with the impingement up there, he wasn't able to get the arm up top," the Nats' 70-year-old skipper explained. "The throw was more of a sidearm swing. And now that it's starting to get healthy and he's getting up there and he's got a lot more arm strength, that slot and that release point, it takes time." 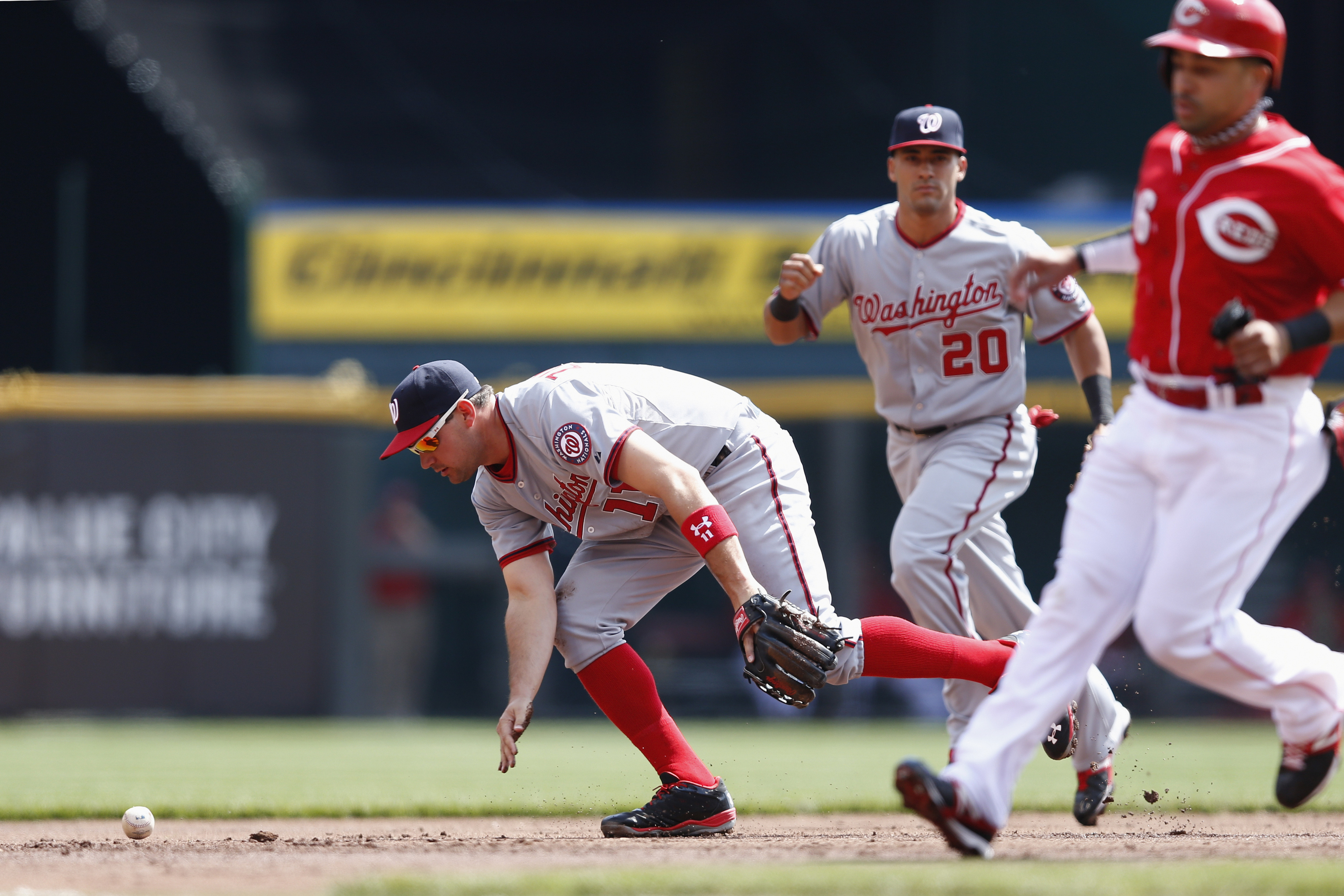 Johnson said the arm slot doesn't necessarily need to change. "It will just get more consistent," the Nationals' manager said, "It's like anything, you know. He's got new muscles that he's using in there. He's getting up top. He feels pretty good. He works a lot and throws a lot, and it's going to come around."

"I think he's still going through some growing pains and trying to find the arm slot and [get] his throwing mechanics back to when he was pre-injury and pre-surgery." - Rizzo on Zimmerman on 106.7 The FAN In D.C.

Mike Rizzo addressed Zimmerman's throwing issues and offered his thoughts on the third baseman's health in his own appearance on 106.7 the FAN in D.C.'s The Mike Rizzo show with Holden Kushner and Danny Rouhier this morning. "I think he's 100% healthy," Rizzo said, "His shoulder feels fine. I think he's still going through some growing pains and trying to find the arm slot and [get] his throwing mechanics back to when he was pre-injury and pre-surgery. It's a matter of time for him. He's a terrific player. I always say, when he's healthy he's one of the top 15 position players in the league. I still stay by that. Zim is Zim. You pencil in his numbers at the end of the season. He's going to be a productive player in the middle of the lineup and be a guy that can carry the ballclub at times during the season for long periods and when he gets hot he will get extremely hot and when that comes, the pitchers in the National League are going to pay."

"He had to obviously change his mechanics when his throwing shoulder wasn't feeling good to try to find some comfort when you throw the ball. I think he's still trying to do that." - Rizzo on Zimmerman on 106.7 the FAN In D.C.

"What I mean by trying to find his arm slot," Rizzo explained when asked to break Zim's issues down further, "is trying to find his throwing mechanics pre-injury. He had to obviously change his mechanics when his throwing shoulder wasn't feeling good to try to find some comfort when you throw the ball. I think he's still trying to do that. You can see it when he makes some plays -- and he's made some outstanding plays, Ryan Zimmerman-type of plays. The first game here in Miami he took a ball from deep, deep third base and made a perfect throw with great velocity on it and had to come over the top and really throw it 100% and he did effectively."

"It's just trying to get consistency with it," Rizzo concluded, "and figure out where it is on different positions on the field, and squaring up his shoulders, getting his feet involved and that type of thing. He's just kind of going through a little bit of growing pains. But Ryan Zimmerman isn't a guy that I'm worried about going into Game 15 or beyond."

Does the fact that Johnson and Rizzo aren't worried make you feel any better?