Washington Nationals' manager Davey Johnson was so impressed with Ross Detwiler that he let the left-hander he called "horrible" at the plate a few weeks back hit in the seventh after Kurt Suzuki tripled to start the frame in what was then a 4-1 game. Johnson talked about Detwiler after the game...

While Davey Johnson argued in support of his catcher, Kurt Suzuki, during the game, he wasn't too upset afterwards when talking about home plate umpire Greg Gibson's call at the plate in the bottom of the fifth. Miami Marlins' infielder Chris Valaika tried to score from second on a two-out single to right by Donovan Solano, but Jayson Werth fired a strong throw home that reached Suzuki's mitt at the same time Valaika arrived at the plate. As the runner slid by home, Suzuki tagged his helmet a split second before Valaika slapped the plate.

Here's a screencap of the play at the plate from MLB.tv: 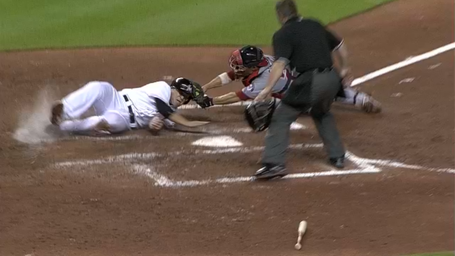 "I saw Suzuki tag [Valaika] in the helmet," Davey Johnson said, "and it didn't appear when he tagged him that [Valaika's] hand was down." - Nats' Davey Johnson on close call at the plate

Davey Johnson talked glowingly of his starter in the post game press conference. He even noted that he was happy enough with Detwiler's outing that he let the pitcher he called "horrible" at the plate a few weeks ago hit after Kurt Suzuki's triple in the top of the seventh, when his team had a 4-1 lead and Detwiler was at 85 pitches.

"You know it's pretty good when I let a pitcher hit with a man on third late in the ballgame," Johnson joked, "Even though we did have a [three] run lead." Detwiler finished his third start after 7.0 IP, having allowed seven hits, one earned run on the play at the plate and no walks. The Nationals '07 1st Round pick struck out five Marlins.

"I told [Detwiler] last time out I'd let him go further. I expected him to go further than the seventh inning, but he pitched a heck of a ballgame." - Davey Johnson joking (sort of) about Ross Detwiler's start

"Det was outstanding again," the Nats' manager said, "A great effort and a lot of good things. I think that's the first time I let him throw, I think he threw 107?" He had. Johnson asked if that was a career-high. It was. The previous high was 103 pitches, Detwiler has thrown over a hundred just three times so far in his career. "I told him last time out I'd let him go further. I expected him to further than the seventh inning, but he pitched a heck of a ballgame." Asked about the pitch selection, the Nats' skipper said, "He got some outs with his curve ball. He made one bad pitch with the curve ball to the third baseman, [Placido] Polanco, and he pulled it down the line."

Detwiler just missed with that pitch, one of the seven sliders he threw. "He wanted it outside and down," the manager explained, "And it was thigh-high." It was one of the few mistakes Detwiler made all night in the third strong start of the year for the left-hander. Davey Johnson's been impressed. "It was another great ballgame. He should be 3-0. He's been outstanding."

From his seat in the Nats' dugout, Johnson got to watch a great start and also test his eyes on the play at the plate. He called the play correctly from where he was sitting and though he may have seen it on a replay during or after the game, he described what's captured in the image above accurately in his answer after the game. "I saw Suzuki tag [Valaika] in the helmet," the 70-year-old manager said, "and it didn't appear when he tagged him that [Valaika's] hand was down. And I thought he called it right the first time and then he kind of changed it. Said he thought he called it a little too early, but we survived it. So no big deal."

Johnson admitted it was a tough call for the umpire. "But it was a heck of a throw by Werth," the Nationals' manager said, "And a heck of a tag." Johnson sounded pretty sure he was right and he let Gibson know. "I said, 'You had it right, then you changed it.' But, he called a good game." And the Nationals maintained their composure, shut down the Marlins and got the win to take two of three on the road and five of the first six with the Fish.