The New York Mets' Matt Harvey has begun 2013 on a tear, but how sustainable is his performance, and what can the Nats' hitters expect to see in the series opener? A big-time pitcher duel goes down in Flushing tonight when Harvey faces off against Washington Nationals' ace Stephen Strasburg.

The Pitching Daily Brief is back after a short out-of-town-real-world-work hiatus with a signature Friday night matchup, featuring Matt Harvey against the Nationals' Stephen Strasburg. Harvey has been really, really good early this year. Although he isn't as talented as he has pitched so far, he's still nasty.

Harvey was selected with the seventh overall pick in the 2010 draft by the New York Mets after pitching for the North Carolina Tar Heels in college. In 2011, he kicked off his professional career with the high-A Port St. Lucie Mets. Harvey generated strikeouts at an impressive clip, and after 76 innings pitched, was promoted to double-A Binghampton. The 22-year-old experienced more success there, although his 4.53 ERA hid a little bit of that.

His 2011 achievements earned some attention from prospect watchers. Baseball America ranked him as the 54th best minor leaguer in the game before 2012, while MLB.com had him at 38th. Project Prospect was even more optimistic, ranking him 25th, which was a significant improvement on his pre-2011 ranking of 48th. SBNation's own John Sickles stated that "[h]e can be a number two starter and someone to build around. Some evaluators see him more as a closer if his changeup remains erratic, but I'm cutting him some slack on that issue and am optimistic" at the beginning of 2011, and Sickles still viewed Harvey as a #2 at the end of the year.

Harvey had a quick rise to the Show. After posting 9.16 strikeouts and a below-average four walks per 9 with triple-A Buffalo, he debuted with the Mets in 2012 at age 23. In nearly 60 innings with the Metropolitans, Harvey showed his strikeout promise -- punching out 10.6 batters per nine -- while also experiencing some control issues.

"Whatever I’ve done so far, it’s not going to mean anything at all if I don’t keep doing it...I’ve appreciated the praise, but more than anything it becomes fuel for the fire to go out there and try to dominate."

The Nats will face a stiff challenge tonight, so let's see what Harvey goes with.

Harvey employs five pitches, but primarily relies on his fastball to get ahead, stay ahead, and generate outs like Exxon prints money. The below numbers are combined for 2012 and 2013, except for value (which is 2013). His usage is pretty much the same between both years, so I've combined for a little larger sample.

Note that Harvey has gone to the four-seam much more against righties on the first pitch and when he is behind or even in the count in 2013. Similarly, when Harvey is ahead in the count or there are two strikes against a right-handed hitter, he is much more inclined to drop a slider:

Briefly on slider location against righties (view from catcher): 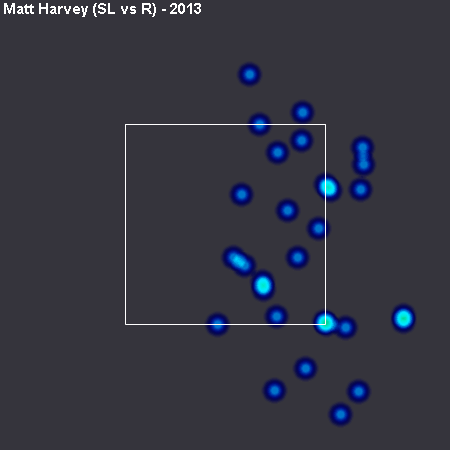 Yea, so, about that four seam. Scouts love it:

Scout on Harvey's fastball: "Dare I say he has a Dwight Gooden-ish hop up on top? Guys are swinging and missing by 3 to 5 inches." #Mets

Fangraphs and .gif watchers love it (note the arm-side run on this bad boy):

And, among others, the Old Gray Lady loves it:

Harvey’s fastball, though, is what has propelled him to this eye-opening start. It can dial up a radar gun and send a charge through fans and teammates. And it has earned him generous comparisons, even if the people doing the comparing have had to reach way back in their memories.

Get this. So far this year, Harvey has generated a 47.1% whiff percentage when using the heater. For context, here are the top fastball whiff rates since Baseball Prospectus started keeping the stat (minimum of of 200 fastballs pitched):

OK, so before we get too carried away with fastball whiff rate and overall success -- there are some middling names, to say the least, on there -- it's still a crazy percentage. And it will probably come down. But what makes the fastball successful?

Obviously, there's velocity. That's easy. Another reason may be movement. Keeping the sixth of Mike Fast's commandments in mind, it's important to note that movement does not equal pitcher success. But there are some pieces of information we can bring together to make a reasonable case that it helps Harvey achieve success with the heater.

First, here's where Harvey is throwing his fastball this year: 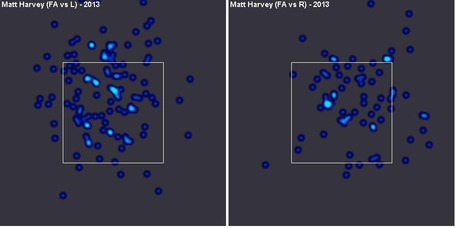 Mostly up, and occasionally in. When one throws 95+ MPH, one can get away with such location. This is particularly true when one has ridiculous vertical and horizontal movement on the offering, like Harvey does.

Just how much movement does Harvey's four seam generate? PITCHf/x has him getting the 13th most vertical rise in the league this year out of 105 pitchers, with 10.9 inches of upward movement when compared to a spinless pitch thrown without gravity. But that's not all -- his movement in to right-handed hitters (6.3 inches) is tied for fifth most among the same sample (with some pitchers not having data). That's a little more than 1/2 inch less left-to-right movement on a fastball than Chris Sale gets with his slider (-7.0 inches). A .gif of that slider is below -- for some reason, you may have to click to get it to run.

Dave Allen figured out the best location for fastballs by run value; as I've mentioned before, the data is from 2008. However, considering the offensive environment has been slightly more depressed since that time, it's probably reasonable to think the values have adjusted downward slightly. The circles represent my best, and likely samsonite, placement of Harvey's fastball on the chart (click to enlarge):

Against righties, Harvey's fastball movement places him on the cusp of where batters' efforts are generally futile. The movement and corresponding run value isn't too bad for lefties, either. And even when hitters make contact, only 10%(!) of fastballs in play end up as line drives.

Harvey's career numbers against righties also suggest that velo isn't his fastball's only signature feature. Hitters from that side of the plate have a 89 sOPS+ over 136 career plate appearances, including a fairly incomprehensible -29 sOPS+ this year. I suppose I could say that's 129% better than the average MLB pitcher has performed against right-handers this year, but I can't figure out what that even means. Anyway, that's what a .083/.154/.083 line will earn you.