Like the NY Mets' Matt Harvey, the St. Louis Cardinals' Shelby Miller is a talented young hurler with a good fastball and curve ball. The Washington Nationals will again face a tough test this evening in another intriguing early-season tilt in the nation's capital.

The Major League Baseball schedule is both relentless and redemptory. Off a rough series against the New York Mets, the Nationals get right back at it tonight against the St. Louis Cardinals. Their assignment, in part, is to score against the Cards' Shelby Miller, which has been no easy task for his opponents this season.

Miller was taken by the Cardinals with the 19th pick in the 2009 draft out of Brownwood High School in Texas. Baseball America ranked him as the 50th best prospect in the game before 2010. That year, Miller threw 104 innings at Low-A Quad Cities. His strikeouts per nine innings -- just over 12 -- were excellent, and he limited walks fairly enough.

Baseball America had Miller as the 13th best prospect before the 2011 season. Miller continued to rack up K's between two levels, averaging over 11 K/9 between High-A Palm Beach and Double-A Springfield while pitching nearly 140 innings. Midway through 2011, John Sickels said of Miller that "[r]eaching Double-A at age 20 is no easy feat, and Miller has the makings of a future ace." Sickels ultimately concluded that

Miller works with a 94-98 MPH fastball. His curveball is already plus and his changeup has rapidly improved, giving him three strong pitches. He has mound presence beyond his years and is a pitcher, not a thrower. His mechanics are clean, repeatable, and consistent, which should help him stay healthy. He has all the physical and mental attributes of a number one starter, and we should see him in the majors sometime next year. Barring an injury or unlikely collapse in Double-A, Miller is a clear Grade A prospect.

But minor league stats don't portend future success, particularly for a kid pushing rapidly through a deep system. Late last year, Sickles discussed adjustments that Miller made to his delivery during the second half of 2012, remarking that

[t]he improvement [in performance during the second half of 2012] is attributed to mechanical adjustments that improved his command, more willingness to use his curveball and changeup, and a better attitude overall. With a mid-90s fastball, two impressive secondary pitches, and better control, Miller still profiles as a top-of-the-rotation starter.

Having already accumulated around half a win (+.4 fWAR, +.8 bWAR), Miller's been pretty darn good this year.

Miller has brought a four seam fastball, curve ball, and a change up to the table in 2013.

Brooks Baseball also shows him having thrown 4 cutters and 2 sinkers this year, but I've omitted those. On a value basis, his fastball is 10th best in the league among 101 pitchers, while the curve is 5th out of 84. Rate-wise, Miller's curve appears to be his best pitch (worth 2.6 runs per 100 times pitched). The fastball, at 1.74 runs per 100, is also pretty impressive in the early going.

Here's the breakdown by batter handedness and situation: 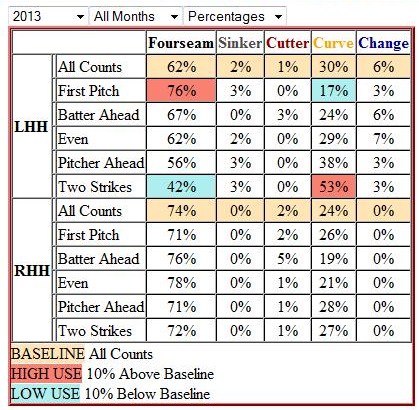 Miller doesn't use his fastball as often as, say, Ross Detwiler, but you can see above he's really a two-pitch guy. Now, both of those pitches are above-average offerings, but as a batter one can pretty much expect something either hard or bendy. Lefties could probably focus more on seeing a curve ball with two strikes, although I'd suppose that guessing is probably limited to 0-2, 1-2, or 2-2 counts.

Miller's batted ball profile is below.

Miller's BABIP is pretty low for a guy giving up line drives 19% of the time, a tick under the league average of 20%. Check out the following group of pitchers this year who have a line drive percentage similar to Miller's rate:

The talents of the first three guys on this list are widely known, so there may be something to their results that would make the statement "they are below league average BABIP value, so they are due to regress" accurate, but not entirely thorough. Time to dive a little deeper into Miller's results to see where his BABIP is coming from.

We can take a look at Miller's xBABIP, or expected batting average on balls in play, to see how fortunate he has been on contacted balls. xBABIP tells us what a player's BABIP should be based on batted ball data. Using last year's formula, Miller's xBABIP (if I'm working it right) is .296 -- pretty far above his .217 rate. So something is causing him to perform better than league average and his expected average.

For starters, his fastball BABIP is a microscopic .194. Viewing Miller's batted ball profile for four seams can help us understand in part why his fastball BABIP (and overall BABIP) is so low. Small sample size caveats apply, of course, so keep that in mind here and as we look at the next two charts.

First, below displays Miller's 2013 line drive percentages on fastballs by location. Note that just 15% of his fastballs get put in play (Strasburg has about a 21% fastball BIP rate, for reference). Batters just aren't making a whole lot of hard contact against the heater:

Indeed, the overall LD% on Miller's fastballs is a measly 9.38%. This rate places 14th best in the majors among 125 qualified pitchers (do NOT look at the last name on that list! Don't do it!). If you include all pitch results, that number drops to just 1.42%. And even when batters are catching the heater flush, they may not be getting the benefit of the close to ~ .700 league average BABIP on line drives:

Admittedly, it's unclear whether the hits on fastballs at the low and in and low and away (from right handers) location came from line drives, but it is clear that the line drive down the middle turned into an out. I suppose if you assume the other two did fall in, you're looking at a .667 BABIP on line drives, close enough to league average to make this point pretty meaningless beyond sample size concerns. But at the same time, it is illustrative of how well Miller has limited hard hit contact, and how he has leveraged that into three pretty good starts.

So, what we know at this point: 1). Miller goes to the four seam about 70% of the time. 2). When he throws the fastball, it's put in play just 15% of the time; 3). Of that small opportunity, only 9% of balls in play are line drives; and finally 4). Even then, he may not be hurt that much when batters make the best contact.

It's worth repeating that Miller's only thrown about 212 total fastballs, a number which will be far, far greater by the end of the year. Like we said with Harvey, some of these numbers have to start swinging in the hitters' favor sooner or later. Watch tonight for quality of contact against the fastball; Miller hasn't seen a ridiculous amount of whiffs on it this year, so contact isn't -- or shouldn't be -- a tremendous issue against the pitch. However, like a SAFER barrier at Talladega, the impact of hard contact against him has been limited. That itself doesn't fully explain why his BABIP is so low, but it does help to understand how he has pitched and why he's been successful this year.