Bronson Arroyo is a veteran major league pitcher who throws several different pitches, occasionally from different arm angles and velocities. He also attacks the strike zone early with an excellent curve and above average change, presenting opportunities for success -- and failure, if hitters are not discerning -- for the Nats tonight.

I'm not saying anything up front that the commentariat doesn't already know: The Nationals have not looked very good recently, getting poor hitting performances and rickety defense from the players who contributed in 2012. Having faced several really good pitchers recently -- Matt Harvey, Shelby Miller, and Adam Wainwright, among them -- their hitters have an opportunity for a measure of relief against Bronson Arroyo tonight.

Arroyo broke into the bigs at age 23 with the Pittsburgh Pirates, making 12 starts over the course of his 20 appearances. After an unremarkable three-year stint in Boston, in March 2006 Arroyo was dealt with cash to the Cincinnati Reds for Wily Mo Pena. He earned All-Star honors that year en route to a +4.1 fWAR and +6.8 bWAR season, marks which he has yet to approach again.

Arroyo has been with the Reds ever since, and the-now 36-year-old is enjoying something of a performance rejuvenation this year, sporting an ERA of 3.54 to go along with a 3.12 FIP and 3.77 FIP.

Most interesting among his single component stats has to be his career-low walk rate of .96 walks per nine innings. But because Arroyo only strikes out a tick over 5 batters per nine, his performance is based as much on his approach, peripherals, and defense as it is his own ability to limit walks.

Honestly, you're guess is as good as mine here. Here's a matrix of what Fangraphs, Brooks, and Red Reporter figure:

The Red Reporter link includes additional information on his offerings and a good breakdown of Arroyo circa 2011; since he's largely the same pitcher today, I've used their information to offer a third opinion to Fangraphs and Brooks Baseball.

Here's my go at the normal table based on 2013 data, with everything but value from Brooks.

Red Reporter and the great Mike Fast have the change and split as the same, so I've tried to keep that consistent here.

David Laurila of Fangraphs recently interviewed Arroyo and asked him what he threw. Arroyo responded that

Great! So why do databases and people think he is throwing a slider? Dan Rozenson of Big Leagues Magazine is here to help. Rozenson states that

[a]fter converting all his sliders to curveballs, the results were clear: curveballs that actually "rose"—that is, the pitches previously assumed to be sliders—mostly came from a considerably lower and wider release point than his curveballs that "dropped."

So from here on I'm just going to call all sliders curves.

On value: Over 100 pitches, the curve is worth something like a whopping 6+ runs when you combine slider/curve values (enough for best in the league) and the change up is a pretty darn good offering, too.

You won't see it reflected below, but against righties Arroyo went to his change far less in 2012 -- 11% overall -- than he has this year. This assumes one can differentiate between his pitches which, as Red Reporter pointed out, Arroyo himself sometimes can't do. 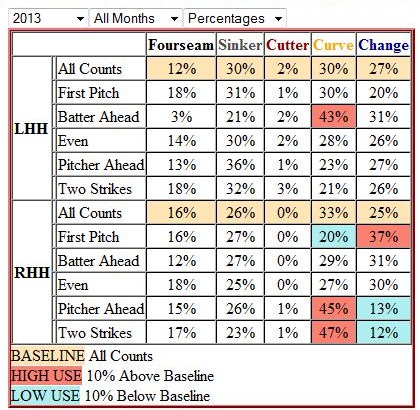 Arroyo'll (sorry, couldn't resist) throw pretty much anything at any time, save for the cutter. As far as defending against the curve, he appears to pitch lefties somewhat "backwards" by eschewing the breaking ball late in the count in favor of pitching it early. This is also true to an extent against righties, although they can expect a curve ball both late and early. I wouldn't be surprised to see at-bats of all hammers tonight.

Here's a cool tool from Brooks showing Arroyo's usage by inning in 2013. 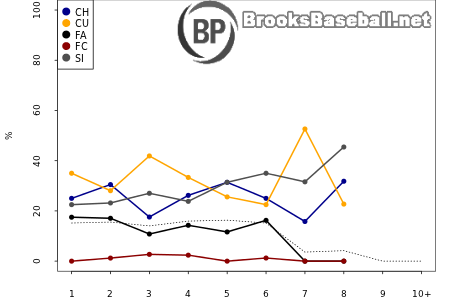 Not only will Arroyo pitch batters "backwards" in individual at-bats, but he'll also establish his off speed stuff early so he can transition to sinkers later. To be sure, there is likely a relationship between throwing first pitch breaking stuff and seeing more breaking stuff early in the game, but if you believe teams prefer to feel a hurler out the first time through, then you could make the case he pitches both hitters and the game generally backwards.

Small sample size you say? Here is the same graph, but for all years since 2007: 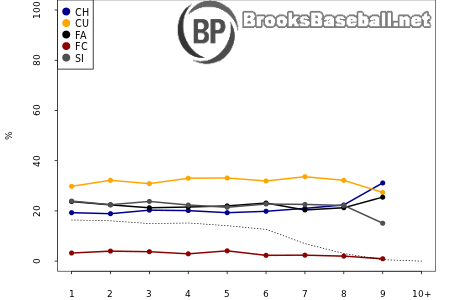 Between batter and inning usage, it seems to be a safe bet that Arroyo will come out firing off-speed and breaking pitches the first time through the order from the outset of each at-bat.

Arroyo gets his own movement section. I'll use Fangraphs' chart to illustrate what Rozenson described above. 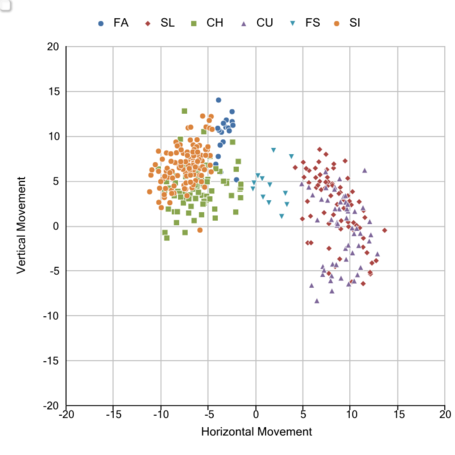 Viewing the movement from left to right, a horizontal anchor-like pattern emerges. Arroyo generates 9 inches of break away from right handers when using the curve, good for 8th most among qualified pitchers this year. This is the "Frisbee" effect of the pitch that you may hear Charlie and Dave or Bob and FP talk about during the game.

Arroyo will use a more exaggerated 3/4 delivery for his curve and splitter/change on occasion. 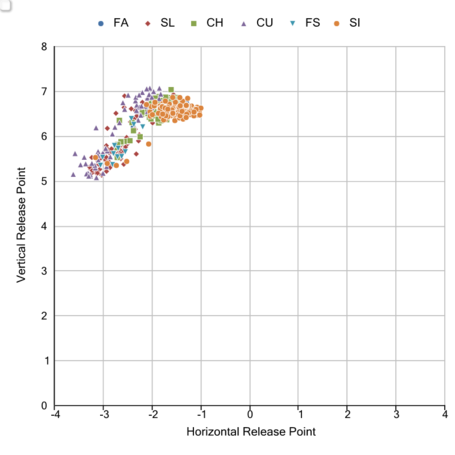 As Rozenson found, the more exaggerated Arroyo's horizontal release point, the more vertical (in an upward direction) the curve is likely to move, and vise versa. It's unclear what statistical effect this has had over Arroyo's career, but one could make a case that it makes hitting more difficult because the batter has to adjust to a foreign release and movement very quickly.

First, Arroyo's curve has the 5th best called strike to ball ratio, at nearly 1:1, in the major leagues this year. So, although batters may decide to simply spectate when Uncle Charlie comes knocking on 0-0, 1-0, 0-1, or other early counts, they are equally as likely to let a strike go by and get down in the count as they are to get ahead. This is unlike other curve ball pitchers, because a batter can often bet on the pitch being a ball if they are able to identify the pitch early enough.

Second, so far he has thrown a first pitch strike 72.2% of the time this year -- way above the MLB average of 59.8% and his career average of 62.7%. He is third in the majors by that measurement.

Third -- and sort of bringing the above together -- batters aren't swinging at the curve and change early, where both offerings are far more often thrown for called strikes than in all counts combined. 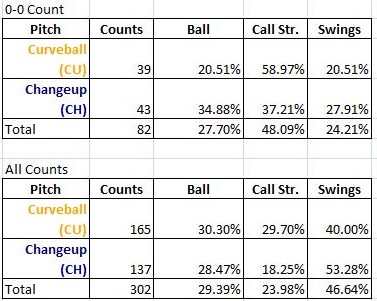 Those swings on 0-0 curves and changes have resulted in a .363 batting average, compared to a .202 average on all counts when you subtract out the 0-0 results. Additionally, out of the 82 curves and change ups, he's only thrown 23 balls - a 73% strike rate, like his overall line. Yes, this is a small sample size. But the point is that between the three statistics, you can see how he is sporting an incredibly low walk rate, getting in favorable situations, and generating outs.

Fourth, batters have performed better against Arroyo early in the count relative to their overall performance against him in all counts throughout his career (a tOPS+ that is 100 is a career average performance).

Finally, here is how Arroyo himself approaches pitching:

I’ve been successful over a long period of time by mixing and matching pitches a little differently than most guys. I pitch backwards a lot. I throw a lot of off-speed stuff in fastball counts. I’m also aware of my surroundings. I’m pitching, sometimes — not on a hunch, but on calculations based on a guy’s body language, his eyes, what he did to me last time. He’s watching a videotape of the last time I faced him, and I’m watching the same videotape. I know he’s making adjustments and I have to make them too. Who is going to beat the other to the punch?

Precise and calculated: Arroyo knows how he has to succeed, and so far this year, he is executing.

Arroyo's earning value in part by throwing the curve early and getting called strikes while hitters leave the bat on their shoulder. Perhaps a consequence of being down in the count frequently means compromising approach-wise; particularly when you're started off with a curve or change.

Given the funk the offense is in, considering Arroyo usually approaches batters with breaking and off-speed stuff early and often, and finally considering the Nats have a positive run value against change ups and a nearly-neutral value against curves, maybe Arroyo is what the team needs to pick things up with its recent swing-first-take-walks-maybe-later mindset. At the same time, swinging early doesn't by itself cause success, so some measure of discipline -- which the team is certainly capable of -- will be required.