Washington Nationals' left-hander Gio Gonzalez talked to Federal Baseball on Sunday afternoon about his night out on the town in D.C. on Saturday and his start against the Braves tonight in Turner Field. He also talked about pitch selection, trusting his catchers and taking on the Nats' divisional rivals from Atlanta.

Gio Gonzalez was humbled by the opportunity to represent his country in Miami in this past March's World Baseball Classic. Before the 27-year-old left-hander faced the WBC entry from Puerto Rico in Marlins Park, he told reporters how much it meant to him to be given the chance to pitch for the United States by manager Joe Torre, pitching coach Greg Maddux and the U.S. squad.

He sent out Instagram pictures of himself at the event after it ended. 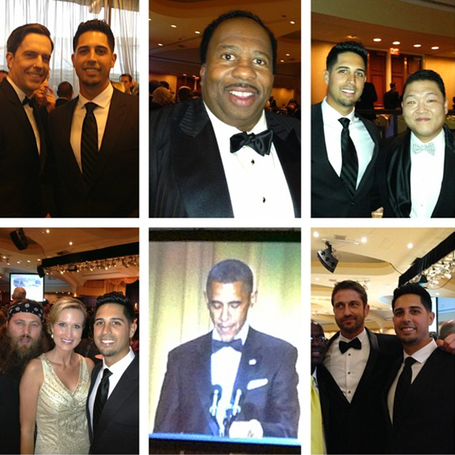 Q: Who was the biggest celebrity you met at the White House Correspondents' Dinner? Gio Gonzalez: "Tyler Clippard. Hands down." -Gio Gonzalez to FBb

There's the Washington Nationals' 21-game winning lefty with Gerard Butler. Gonzalez with Psy. Side by side with Ed Helms. The Duck Dynasty guy? That actor from "The Office"? So who was the biggest celebrity he met?

The Nats' left-hander faces the Atlanta Braves for the second time this month tonight coming off what was his best start of the season last Thursday at home against Cincinnati in D.C. Gonzalez held the Reds to one run on one hit in eight innings of work in an 8-1 win. Five starts into his second season in the nation's capital after a first run that earned him Cy Young consideration and at least one 1st place vote, the Nationals' starter is (2-1) with a 4.50 ERA, 3.58 FIP, 13 walks (4.18 BB/9) and 27 Ks (8.68 K/9) in 28.0 IP early in 2013.

The one thing that jumped out when looking at Gonzalez's numbers so far this season was that he was throwing more fastballs than last year (from 70.8% to 75.1%) and far less changeups (8.2% to 3.9%) over his first five outings. Is it part of a conscious effort to focus more on the fastball/sinker, or just that he has a better feel for his fastball, or doesn't have a feel for the change early?

"I've been [working] five years with 'Zuki, so we've always been on the same page." - Gio Gonzalez on Kurt Suzuki

"I'm not going to lie to you," Gonzalez responded when asked, "that's something you have to talk to [Kurt] Suzuki about. He's been doing more of his homework. I try to go with a Mark Buerhle approach. It's more like, 'Trust your catcher, whatever he puts down try to go with it.' He does all his research, he's always doing his homework in the video room. Going over it with [Pitching Coach Steve McCatty]. So there [are] a lot of things that I trust with 'Zuki. I've been [working] five years with 'Zuki, so we've always been on the same page."

"Suzuki has caught Gonzalez for all but one game this year (the exception being his April 9th start against the White Sox), and so far Suzuki has the lefty throwing more sinkers (189) than fastballs (151). Last year, Gonzalez threw more fastballs than sinkers, so it will be interesting to see going forward if Zuk is subtly adjusting Gio's pitch selection this year -- is this perhaps an effort to get more grounders/contact? It's a small sample, but Gio's burning more worms this year (51.4%) than at any other point in his career while striking out less batters per nine (8.68) than his career average (8.79). 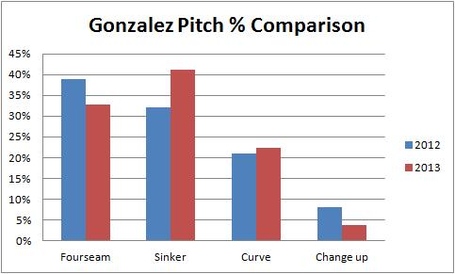 "Also of minor consequence is that Gonzalez has thrown a total of 24 change ups through his five starts this year, with nearly 30% of that total -- 7 -- coming in the White Sox game, which Wilson Ramos caught." 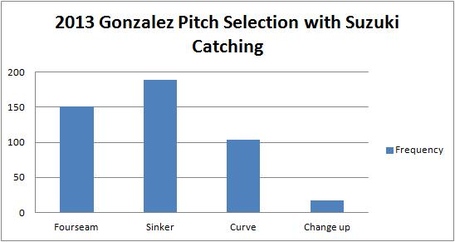 Gonzalez and Suzuki were together in Oakland from 2008-2011, and at this point the left-hander said he trusts the catcher the Nats acquired from the Athletics nine months after they dealt four prospects to the A's to bring Gonzalez to D.C., implicitly.

"Absolutely," Gonzalez said, "Especially with the way he's gone about it. We have a great track record together and I think they do a great job. Not only with Zuk, but the rest of our guys in the catching department. We have such great guys and the way they go about their stuff. So, it's almost to a point where you can trust them."

"You can always shake them off if you don't like it anyway, but you do trust them and what they call for you to throw?"

"I do. And the same thing with [McCatty]," the Nats' lefty explained. "They know what they're doing. They do their homework. They're constantly going over hitters. So it's almost like -- you have to also trust your pitches too. You can't just, 'All right, groove it in there.' These guys can swing a bat, so it's more like, just trust them as much as possible."

"What about learning from your fellow pitchers? Can you learn anything from watching the likes of Ross Detwiler pitch? Or vice versa?"

"[Detwiler is] one of those guys that you want to sit on the top step and watch everything he does." - Gio Gonzalez on fellow lefty Ross Detwiler

"I think just watching [Detwiler] going out there and attack the strike zone is what you can actually feed off," Gonzalez said. "Especially the way he throws the ball. Mid-90s. Even his two-seam is up there in the mid-90s. He's fun to watch. He's one of those guys that you want to sit on the top step and watch everything he does. From a [mechanical standpoint] of staying back and also the way he just pounds the strike zone. I mean, how can you not want to follow everything he does? He's just a great guy and I think that there's still more room for him to learn. And he's going to be pretty scary as the years go along."

"Davey Johnson has talked about Detwiler and how he's focused on the fastball so much, but when he's mixing in that change and curve ball he's going to be even more dangerous."

"Absolutely," Gonzalez agreed. "Especially if he gets all three down. Curve ball or slider/changeup, you know. He's one of those guys that are going to be pretty tough to hit."

Steve McCatty ranted in Crash Davis' "strikeouts are fascist" mode last season about how he thought strikeouts were bull-[expletive deleted] and advocated for pitching to contact (an often misunderstood phrase) and pounding the strike zone instead of going for swings and misses. So how does a strikeout pitcher like Gonzalez, who's averaged 8.79 K/9 over the course of his career feel about the pitch-to-contact vs the pitch-to-K debate?

"I've always been a big fan of pitching to contact," Gonzalez explained, "You want to stay out there as long as possible, keep your team in the game and try to give your bullpen a chance to rest up and actually use them when you really need to use them.

"And I think that when you burn up all your bullets between four and five innings it does no good for your team. You're scrambling with your bullpen. You're making your guys work even more. You don't at least give your team a chance to get that win. I think that's what we're all trying to strive for... you know, who said it best? James Shields, we're all trying to go for 200 innings. And that's I think the point and the mentality we all should have. Especially with that kind of idea of attack the strike zone and make sure that these guys put the ball in play."

"You respect them 100% and that's the beauty thing about being in the big leagues, each one of these guys will humble you quickly. But you've still have to pitch to contact." - Gio Gonzalez on pitching in the majors

You had good numbers against Atlanta last year, though they gave you a little more trouble than other teams and the first time you faced the Braves this season they scored seven runs on seven hits in 5.0 IP. Are they a more difficult lineup for you this year with the addition of right-handed bats like the Uptons and Gattis?

"It's definitely a different lineup," Gonzalez said, "but you've still got to just pound the strike zone. The Reds were just as hot, they're going out there swinging the bat. In baseball, you've still got to pound the strike zone. It doesn't matter who's up there. You respect them 100% and that's the beauty thing about being in the big leagues, each one of these guys will humble you quickly. But you've still have to pitch to contact. You can't pitch out there with any fear or any doubt of your stuff. So, I think that's the whole point of what we're trying to go with, is just keeping your confidence up and still going after the hitters.

"The Braves [have] a great lineup, a great group of guys, always fun to play against, because it's the [highest] competition that you're going to have. And I think that's what the beauty part about [these] series are, is that you're just having fun and playing at the top of your level."

The big surprise of the season for Atlanta (and maybe all of baseball) so far this season has been the (re)-emergence of Evan Gattis, (who went 1 for 4 with an RBI double and a sac fly vs Gonzalez in his first start against the Braves earlier this month.) How long does it take for pitchers and catchers around the league to put together a scouting report on a player who's a relative unknown?

"It's weird," Gonzalez said, "He makes good adjustments. Detwiler had him up against the ropes the whole time and then all of sudden you try to do the same thing with him and he makes the adjustments. And I think that's what a great hitter does. He just learns how to adapt or make the adjustments on kind of like a fastball in or a changeup out and away. He's just a power hitter. He's a threat [in] that lineup and he's a great guy and it's going to be crazy when they get their healthy boys back."

"I wonder where they're going to put him when they get [Brian] McCann back, I don't mean to ask you to answer the question, but with McCann coming back they've got to find a spot for Gattis the way he's hitting?"

"That's exactly it," Gonzalez agreed. "That's how good their lineup is, is that there's no room for error there and I think that's a good thing, but at the same time we look at our lineup, we have a great lineup. I think that we're going to try to stay toe-to-toe with the best of them."

So after your first run at the postseason and playoff run, do you change anything? Can you hold anything back early knowing you're going to face a team all year long and then possibly once or twice in a series?

"The thing is," Gonzalez explained, "last year's is a different team. Last year they had some different guys and this year we have different guys, so it's just trying to go out there and trying to have fun. Realistically, I think that Jayson [Werth] said it best, just go out there and play your game. Don't try to change anything. Have some fun. I think that he's a big leader to this team and when he's healthy and he's ready to go we follow in his footsteps. We try to make sure that we play our game and stay focused and not try to do too much."

That "stay healthy" part is once again an issue for Werth, who reportedly tweaked his groin in last night's Nats' loss to the Braves, but if the Nationals' outfielder is available, he and Gonzalez will lead the team into the second game of the four-game series against Atlanta tonight at 7:10 pm EST in Turner Field.