Tim Hudson has enjoyed a lengthy major league career on the strength of several quality pitches, most notably a sinker that generates a large number of ground balls. But, if the season ended today, he would have the highest FIP of his career. What gives?

Drafted out of Auburn University in the 6th round of the 1997 draft by the Oakland A's, Tim Hudson is entering the 14th year of his career in the major leagues. He first pitched for Oakland from 1999 through 2004, and was later traded to the Atlanta Braves for Juan Cruz, Dan Meyer, and Charles Thomas.

It should be no surprise to any Nats fan that Hudson has tossed his signature sinker the most this year. What may be more unusual is that, having compiled a 15-5 record lifetime record against the D.C. squad (with a 2.60 ERA), Hudson has been less than his normal self in 2013. To wit, he's accumulated a total of -0.1 fWAR and +0.1 bWAR over five starts and 28 innings pitched this year.

Hudson's output numbers aren't all that favorable, as the chart to the right indicates. Nor does he strike that many hitters out (5.79 K/9) or minimize walks (nearly 3 BB/9). Let's see why, and how, batters are doing damage.

"I throw more of a cutter than I do a slider, but I’ve also developed a curveball. I’m more of a sinker, cutter, curveball, split guy now," Hudson told Fangraphs' David Laurila last July. Brooks' data agrees that he's the same guy this year for the most part:

The more life you have on your pitches — including the more sink you have on your fastballs — the less important velocity is. If you’re a control guy whose fastball is pretty straight, 86-87, as opposed to 88-89, can be a pretty big difference. You have to really spot it, because there’s not a lot of room for error.

Below you'll notice Hudson has thrown the sinker a little less overall to righties in favor of the curve, but his pitch selection has largely remained the same between 2012 and 2013.

Two things should jump out at you below. First is Hudson's huge HR/FB rate, and second is Hudson's BABIP on the sinker (SI).

If you like Fangraphs' data more than Brooks, you can bump his sinker BABIP up to .341. Using PITCHf/x data from 2007 onward, Hudson's average SI BABIP has been somewhere between .293 (Brooks) and .276 (Fangraphs). The discrepancy is likely because Brooks has manually classified 23 more sinkers pitched (199) than Fangraphs, but the total frequency is close enough to illustrate the point: The offering is getting touched up for hits more often than ever.

Not much needs to be said about a 19.2% HR/FB rate; Hudson's career value here is 10.5%, league average is usually around 11%, and as we know, this statistic varies pretty dramatically year-to-year. xFIP is therefore probably the closest picture of reality going forward for Hudson in 2013.

To the two earlier pieces of information (the HR/FB% and SI BABIP), we can add Hudson's 2013 first-strike percentage (70.9%) and his LHB split (125 sOPS+) as remarkable numbers -- in the comment-worthiness sense -- when compared to his career rate (60%) and split (112 sOPS+). Are these dragging Hudson down? It's somewhat unclear as to the former, but it does appear that the latter, along with SI BABIP, has hurt Huddy.

First, below is a PITCHf/x map for Hudson's sinkers in 2013 by BABIP: 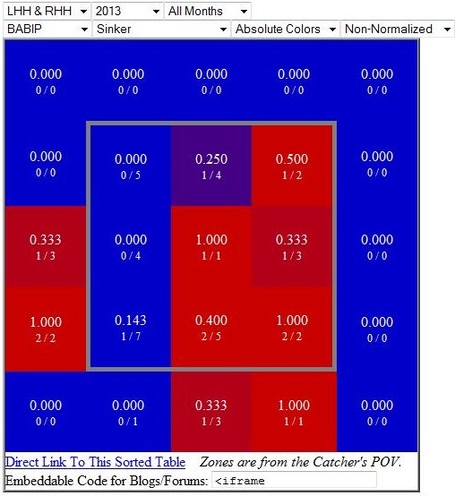 As mentioned earlier, Hudson's 2013 SI BABIP is greater than his career average for the pitch.

Has his SI BABIP rose because he's traded in grounders for line drives? Not really, actually. Brooks has him earning 63.8% ground balls on the offering this year, compared to a 65.5% rate since 2007. Nor is his movement on the pitch all that off from his usual figures, meaning one can't really say based on that information that the sinker isn't sinking as much this year. It is true that he is leaving a few more up in the zone, but you can see above the upper-zone BABIP is not all that red; if anything, he's hurt most low, where most sinkerballers make their living.

Is the sinker fairing poorly because it's getting popped for home runs? Again, the answer here appears to be no -- just one of Hudson's five home runs allowed has come on the sinker (in the chart below, the top left corner of the strike zone was the sinker). 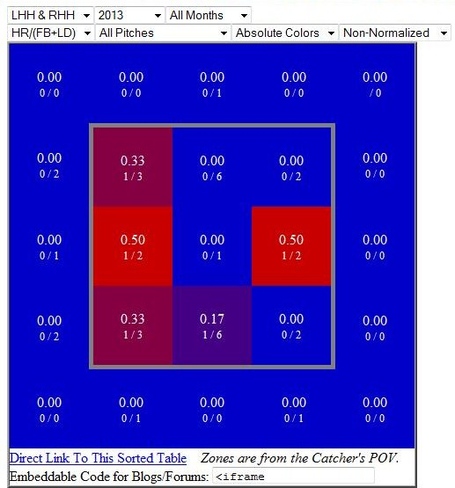 From this, it just appears ground balls are getting through for hits. Line drives aren't up, and home runs aren't sailing out of the park. Digging a little deeper, we see that lefties have raked against Hudson's sinker. The below chart compares Hudson's average, slugging, and BABIP since 2007 against this year's numbers. 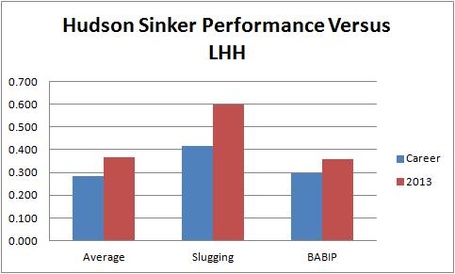 Batters are also having some success taking advantage of Hudson pumping first-pitch strikes (small sample warning). In the 12 at bats where the ball has been put in play, hitters are slashing .333/.333/1.000, good for a sOPS+ of 182 -- in other words, he's 82% worse than league average on 0-0 counts. It bears repeating (like with Bronson Arroyo) that swinging early doesn't cause success, but lefties have parked first-pitch cutters twice this year on middle-in and low-away pitches. So, it's hard to say if opponents are keying on first pitch strikes any more than they have in the past, despite Hudson getting ahead at a career-high rate. Here's one first pitch tater you might remember:

And here's the second:

In conclusion, although Hudson's sinker "struggles" largely concern BABIP- and platoon-related issues, these don't appear to be attributable to a marked decrease in velocity, movement, quality of defense, or a sustainably poor batted ball profile. Indeed, he's earning grounders as often as ever, throwing with fairly normal velocity and normal movement (for him), and isn't teeing up sinker meatballs that are driven out of the park. It seems then that Hudson's just had an unusually difficult run against lefties when using the pitch early this year.

Will this misfortune continue tonight? It's really anyone's guess, but Span and Harper should offer other batters opportunities to drive in runs (if Harper doesn't do it all himself). Still, considering Hudson's underlying profile, it's probably safe to expect another close contest against the division leaders.