Homer Bailey has begun to realize the promise the Cincinnati Reds (and others) saw in him. With a high-quality slider and an interesting ability to get leadoff hitters out, Bailey is a formidable opponent for the Washington Nationals to face.

After sweeping a series from the Miami Marlins, the Nationals look to maintain momentum in Cincinnati. Opposing the Nats' bats are several capable hurlers, and this PDB examines the first pitcher the Nats will face in the series, Homer Bailey.

David Dewitt Bailey got his nickname "Homer" from his great-grandfather, which is ironic when you consider the fact that Bailey was really, really good at pitching a baseball in high school. Drafted by the Cincinnati Reds with the 7th overall pick in the 2004 draft, Bailey was touted as a top-100 prospect by Baseball America on several occasions (ranking in the top 5 as well), and was more well-regarded within the organization than Joey Votto, Jay Bruce, and Johnny Cueto at one point.

Redsminorleagues.com's write-up on Bailey is quite good, and highlights his progress through the minor leagues. After some "ups and downs" in 2005, Bailey had a "bit of a breakout year, at least statistically" in 2006.

Bailey was sent to Sarasota to play for the Reds in the Florida State League. After 13 starts with a 3.31 ERA and 70.2 innings with 22 walks and 79 strikeouts he was promoted to the Double-A Southern League with the Chattanooga Lookouts. Just like his time in Sarasoa, Bailey made 13 starts, this time stretching 68 innings and he posted a glowing 1.59 ERA with 28 walks and 77 strikeouts. His walk rate dropped dramatically overall in 2006, but it was better in Sarasota than in Chattanooga, where it was still below-average but improved from 2005.

After a brief stint in the big leagues in 2007, Bailey began 2008 with the Reds' Triple-A affiliate, the Louisville Bats. It was at this point, according to Doug Gray (the author of the website article), that Bailey began to work on a slider. Statistically, he didn't perform very well either in the minors or majors; for example, his 7.93 ML ERA was accompanied by a 6.41 FIP and 5.10 xFIP. Not awesome. 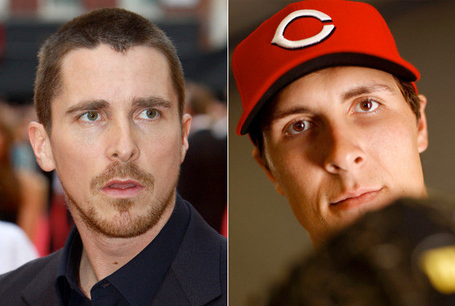 Bailey throws five different pitches according to Brooks Baseball: a four seam fastball, sinker, slider, curve ball, and splitter (pretty similar to Ricky Nolasco, actually). Fangraphs' Pitchf/x shows his splitter actually as being a change-up; since Brooks manually classifies pitches, I'm going with them. Have a look at his 2012 velocity, usage, and pitch values:

The slider is the star of Bailey's repertoire, and unlike Nolasco, Bailey's slider is fairly filthy. 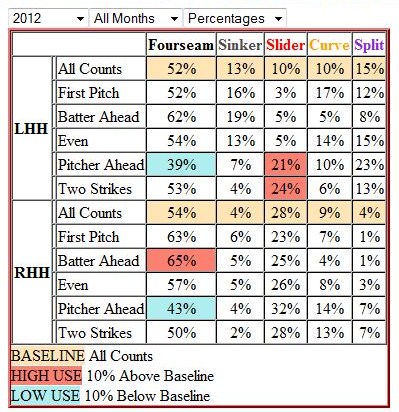 As you can see, Bailey likes to work with the fastball in most situations. Only when Bailey is ahead against righties will he go to a breaking ball more often than a heater.

A little more on the slider: It ranks sixth in the league when sorting by vertical movement, but not in the direction you might think. Bailey's slider actually rises by 3.9 inches more than a ball thrown without spin in the absence of gravity. If you go by Baseball Prospectus' Pitchf/x stats, his vertical movement -- (+)4.37 inches -- puts him second behind only Clayton Kershaw. Admittedly, I don't know why there is a difference, since both Fangraphs and BP are purporting to measure by Pitchf/x (and Brooks has him at 4.5). I suppose we can just agree that his slider rises a lot. Or, explaining this with a statement requiring less mental gymnastics (for me, at least): It simply doesn't drop as far vertically as other pitchers' sliders do.

Unlike his teammates Bronson Arroyo and Mike Leake, Bailey doesn't get a lot of horizontal movement on the offering, sitting somewhere around an inch of movement in toward lefties, depending on which website you get your measurements from. But like the pre-season PDB's indicated, it's unclear that less movement equals a less effective pitch; this is evident when you consider Bailey's horizontal movement places him in the company of Felix Hernandez and Edwin Jackson.

The great Dave Allen looked at run values for particular pitches based on movement and concluded that "sliders that tail away from the hitter the most [are] the most successful." Below is an overlay of Bailey's 2012 slider movement, and Allen's heat map with the relative run values (the slider is red on Bailey's pitch movement chart): 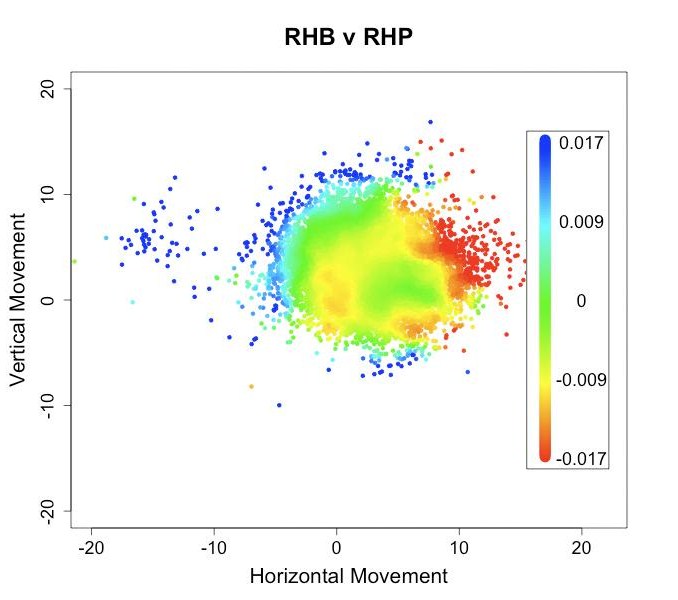 It's a little difficult to match them up exactly, but Bailey's slider lines up in the mid to light-green section of the map, corresponding with a (small) negative run value per pitch. Note that Allen's map was based on 2008 data, and value by location may have changed since that time (especially with fewer runs being scored the last several years). However, it's something, and it will be interesting to watch Bailey's use of the slider this evening.

Here's where you can expect the slider to go, if 2012 is any indication:

Away, away, away from righties (and in to lefties). And batters aren't doing any damage on pitches in these locations, either.

Nothing particularly unusual or far from the league average in 2012 here:

If you want to put Bailey's IFFB% a little closer to the league average of 10%, you can knock the BABIP down a bit.

Bailey shows a marked home/road split, where in 2012 he posted a sOPS+ of 52 on the road over 16 starts, while pitching rather poorly overall in 17 starts at home (a 145 sOPS+!). For more context, his triple slash against at home was .299/.348/.526, and his ERA was in the 5's. I know Great American Ballpark is known to be one of the better hitters' parks on the schedule, but these numbers are a little beyond that effect, I think. He also showed a little bit of a reverse platoon split, too, with lefties performing about 17% worse against him than the average major league pitcher.

In addition to Bailey's slider usage and its effectiveness, notice what else Bailey had going for him in 2012:

Among full-time MLB starters last year (this is the reason why you don't see #1, Kris Medlen), Bailey was arguably the second-toughest pitcher on batters leading off an inning. Bonus PDB! The same went for Bailey's rotation mates, Cueto and Arroyo. Anyway, only 23% of leadoff hitters reached base against Bailey last season, and his 63 OPS+ was in the top 10 by this split, too.

That it is important to retire the leadoff hitter is pretty much a truism to even the most casual baseball fan, so I won't belabor the point beyond noting that the expect run differential between no outs, none on and one out, none on is .2256 runs:

Not the most "valuable" play by run expectancy, but it beats the alternatives.

Bailey's slider could well have earned much of its value by being used to retire all these lead off hitters; after all, he was pretty awesome against leadoffs in 2011, too, and he also had a pretty good slider that year. Or it could be something else. Either way, it will be interesting to watch how the undefeated Nats handle Bailey tonight, perhaps their toughest assignment to date.