The Chicago White Sox have a front-line pitcher in Jake Peavy, who last year rebounded from a tough 2011. Peavy features an effective fastball and sinker. While his days as a league-leader in earned run average are behind him, Peavy remains a formidable opponent.

Off an up-and-down series against the Cincinnati Reds, the Washington Nationals welcome the Chicago White Sox to Nationals Park for a three game set. Interleague match-ups in April: As Harry Dunne said, "that's a special feeling, Lloyd."

Peavy was drafted in the 15th round of the 1999 draft out of a Mobile, Alabama high school by the San Diego Padres, sandwiched between Casey Baker and Bryan Edwards. Neither Baker nor Edwards made the big leagues, but Peavy arrived in 2002 at the old age of 21, striking out over 8 hitters per nine while walking around 3 per over 97 innings.

Peavy's appearance on the national radar surely came by the end of the 2004 season, where he pitched to a 2.27 ERA/3.14 FIP/3.52 xFIP triple-slash. Fangraphs credited him with +3.6 wins above replacement, while Baseball Reference valued him at +4.9 wins above replacement. The next season, Peavy led the National League with 216 strikeouts in 203.0 innings pitched.

Traded to the White Sox in 2009, Peavy never achieved the same level of success as he did with the Padres. Switching from a favorable pitchers' venue in Petco Park to U.S. Cellular Field ("the Cell") in Chicago certainly didn't excite commentators. Traditionalists will consider his 2010 and 2011 seasons on the South Side forgettable:

Peavy eclipsed just 100 innings pitched in each of 2010 and 2011, and hadn't crossed the 120 inning mark since 2008. The reason for this is because he tore his right latissimus dorsi tendon completely off the bone mid-year 2010. "I just felt like somebody shot me," Peavy said at the time. It was certainly a unique injury.

Upon returning to action in 2011, the Jeremy Renner look-alike was solid. For example, he managed to put up +3.1 fWAR, largely because he struck out over 7.5 batters per nine while walking less than 2 per. He also benefited from his lowest HR/FB since the '07 Cy Young season.

Why did Peavy have a poor ERA? He stranded just 64% of the runners that reached base (against a 75.6% career average) and batters hit .317 on balls in play (against a .284 career average). He also had Carlos Quentin playing defense behind him. Finally, there was discussion about inconsistent release points possibly affecting his play.

As you can see to the right, the fastball, sinker, and cutter are all pretty effective. On a rate basis, the sinker (which Fangraphs labels a two seamer, even though Peavy says he throws a sinker) was actually his most valuable pitch, saving 1.38 runs per 100 pitches.

However, this highlights some of the issues when using both Fangraphs (for value data) and Brooks Baseball (for classification/usage): Brooks says Peavy barely threw the sinker, while Fangraphs has the two seam at 6.1 runs saved. Likely, some of Peavy's "two seamers" are being classified by Brooks as sinkers, while far more are considered four seam fastballs. Fangraphs had him throwing 441 "two seam fastballs" against 1251 four seam fastballs, a .35 ratio -- or much greater than Brook's sinker/four seam ratio (.09).

In sum: accounting for both the large difference in classification and Peavy's own admission, I think Brooks' pitch type categories are correct, but I am less sure regarding the frequency. 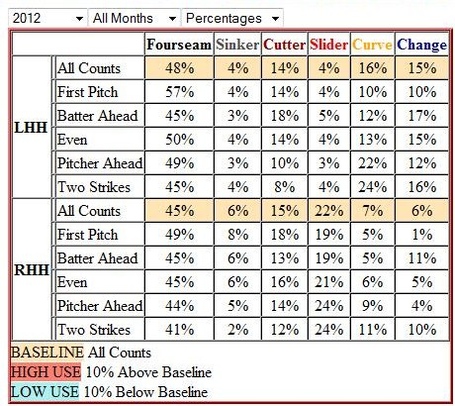 Peavy pitched a steady diet of fastballs relative to his other offerings, while righties saw many more sliders than lefties. Peavy's breaking ball of choice to left handed hitters was, in contrast, the curve. In one start this year, he has used his pitches as follows: 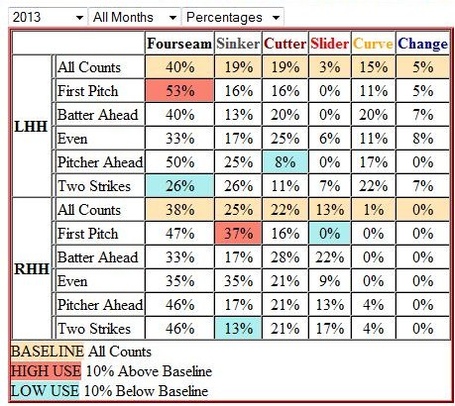 Big-time small sample warning, of course, but against the Kansas City Royals last week Peavy went to the fastball less than in 2012. Apparently, he didn't have his best stuff, which may explain why he went to off-speed offerings more.

"'I didn’t have great stuff by any means. Command-wise we were on point with throwing where we needed to throw it...[a]nd you’ll take that over ‘stuff’ any day to win.'" -Jake Peavy, after first start of 2013

It's pretty obvious, but if it appears Peavy isn't getting a lot of movement on the heater, look for him to audible to more off-speed offerings.

Peavy's four seam and sinker get a fair amount of movement, even though he does not top the league in either vertical or horizontal movement for the those offerings. 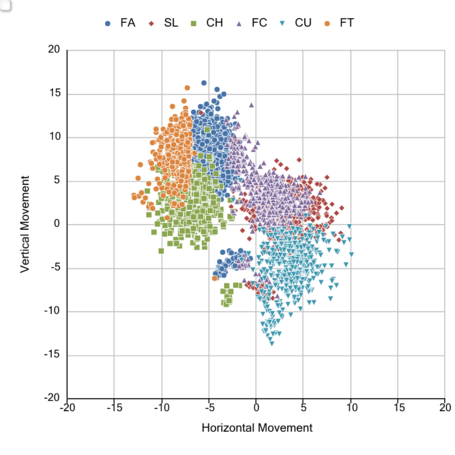 Recall that Peavy throws the fastball and sinker at pretty much the same velocity, too. So, how does he use these two pitches to succeed? Check out the late downward movement generated by his sinker; the black (four seam) and greenish gray (sinker) dots begin to separate very close to the plate, and are about half an inch apart by the strike zone if you believe that some of his four seam pitches as classified by Brooks are actually sinkers -- a meaningful difference when a hitter's decision-making time is minimal.

Versus lefties, view from third base:

Versus righties, view from third base:

What is more, his release point for each pitch is pretty indistinguishable, based on 2012 data (again, here we're going with "FT" as the sinker): 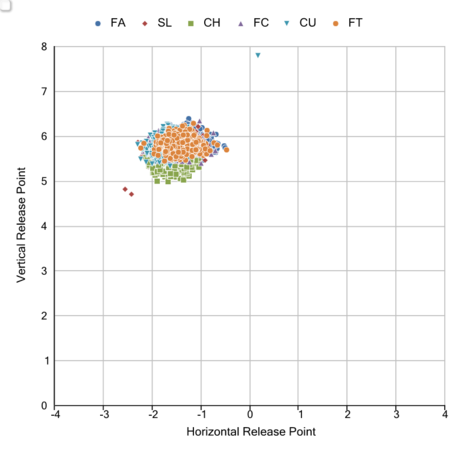 Similar velo, similar release, similar movement for about 45 feet. And that's where things get tough for the opposition. If batters incorrectly identify sinker or fastball, it's probably too late to adjust to the different trajectory by the time the "swing" decision has been made. Weak contact, swings and misses, and outs, result.

Peavy earned around 4% fewer grounders in 2012 than his career average would suggest, and his increase in FB% may have contributed to the .012 BABIP decrease on his career figure:

Batter mis-identification of fastballs and sinkers could help explain how in 2012 Peavy yielded only seven hits on thirty-six pitches on fastballs in the middle of the plate. The map below shows batting average against Peavy fastballs in 2012 against lefties and righties:

An equally low BABIP could also reflect this mis-identification, although this does not explain why pitches middle-in to righties were hit hard. Indeed, very few balls contacted down the middle resulted in solid contact, as shown by his 2012 fastball line drive map:

There are a fair amount of line drives in the middle-low area of the zone (excepting middle-middle), but in some of those areas Peavy had low batting average. So maybe his performance isn't all attributable to deception resulting from 91 MPH pitches that appear to be the same for the majority of the trip to the plate, which is expected. And, anyway, a good defense could also explain why it was hard to square up the fastball/sinker. Last season, the White Sox weren't slouches with the glove, although they weren't amazing, either.

Ultimately, the Nats will have to perform well against Peavy's fastball and sinker (as they did against those pitches last season) to succeed tonight. A few hanging curves wouldn't be bad, either.