Washington Nationals PDB: Analysis of and Report on the Cubs' Burgeoning Jeff Samardzija

The Chicago Cubs' record may again be below .500, but Jeff Samardzija (suh-MAR-jah) has given the team's fans something to look forward to. Opposing clubs? Not so much. This PDB looks at Samardzija's pitching and what the Washington Nationals may do about it.

Share All sharing options for: Washington Nationals PDB: Analysis of and Report on the Cubs' Burgeoning Jeff Samardzija

The Washington Nationals get right back on the field tonight after an encouraging two-game sweep of the Detroit Tigers. Twenty-eight year-old Chicago Cubs righty Jeff Samardzija opposes both the team and my ability to type swiftly. Let's see how he's has gone from "thrower" to "pitcher."

Before the Cubs selected him out of Notre Dame in 2007, there was a question of just what to make of Samardzija. John Sickels wrote at the end of 2007 that the Cubs "knew they were getting a strong arm, but it was unclear how quickly it would take him to transition from thrower to pitcher. It is still unclear."

Fast forward to 2010, where Jim Callis of Baseball America observed that

There are two main issues with Samardzija. The biggest is that he’s still more of an arm-strength guy than a true pitcher. Even when he was throwing in the mid-90s at Notre Dame, he didn’t miss a lot of bats. His fastball straightens out when he overthrows, and while his slider and splitter have their moments, neither is a consistent weapon. His command also isn’t as strong as it needs to be.

The other problem is that in the last three years, the Cubs have moved him from a starter in Triple-A to a reliever in the majors, and back and forth again . . . again . . . and again. That’s tough on any pitcher, especially one who’s as raw and relatively inexperienced as Samardzija. I don’t ever seeing him becoming a starter, so I’d commit to making him a full-time reliever going forward.

Samardzija's stats in limited 2009 major-league duty supported Callis' concern, to be sure. However, the Notre Dame alum posted a +3.0 fWAR/+1.8 bWAR value over 170+ innings last year, improving every pitch in his repertoire over that time.

Why is he good?

Samardzija -- they call him "Shark" too, by the way -- got a lot of strikeouts in 2012 (24.9%) and did a fair enough job of limiting walks (7.8%). He's actually increased his punch-out rate this year, getting almost three strikeouts for every ten batters faced. His relationship with the strike zone has gotten a bit more complicated (9.4% BB%), but it hasn't hurt him as much in part because he's stranded an above-average number of runners.

It's appropriate to put some stock in Samardzija's current strikeout numbers. Recall that K% is one of the statistics that stabilizes for pitchers around 150 batters faced. The tall righty has seen over that amount; 181, to be precise. While it might not stay as high as the current 28.7% value, he's struck out an above-average number of hitters each year since 2011. In other words, I would be surprised (barring injury) to see him go below 25% for any extended period of time, and he'll likely continue to strike out around or over a quarter of hitters going forward.

Unfortunately for us Nats fans, line drive and ground ball rates also begin to level off at this threshold, too. And the dude is getting the right kinds of numbers for each: a worm-burning 54% ground ball rate, and a puny 15.7% line drive rate. What is more, he's getting plenty of infield fly balls.

Add it all up and Samardzija is one-third of the way to last year's fWAR total after just seven starts. He is also sporting a not-too-shabby +1.2 bWAR.

Pitch-wise, his slider is a plus. It's earned him 30% of his strikeouts and also ranks 25th of 79 pitchers by value per 100 pitches. Unless it's first pitch or he's ahead to a lefty, he'll deploy it most any time. 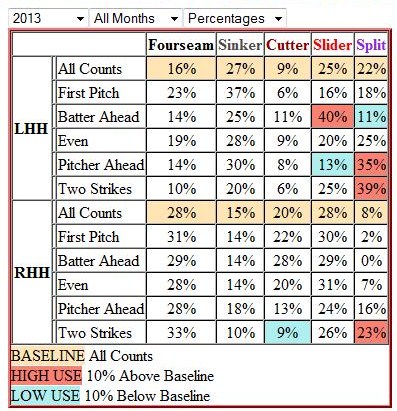 You'll also notice he goes to the splitter on occasion. The 84-MPH offering was a quality pitch last year, and apparently Samardzija is a fan of the Propellerheads, because history is repeating itself in 2012 (I'll show myself out). Indeed, it's the second best split in the league. And look, there's Dan Haren!

Check out the spike in whiffs on the split ("FS"): 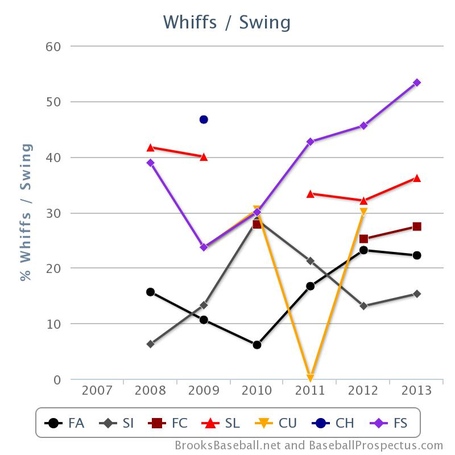 Samardzija goes to the split less frequently that his other pitches -- interestingly, the slider is thrown the most -- but it's very effective when he uses it. Over half are located down in the zone, which is good, because north of there things get more dicey: 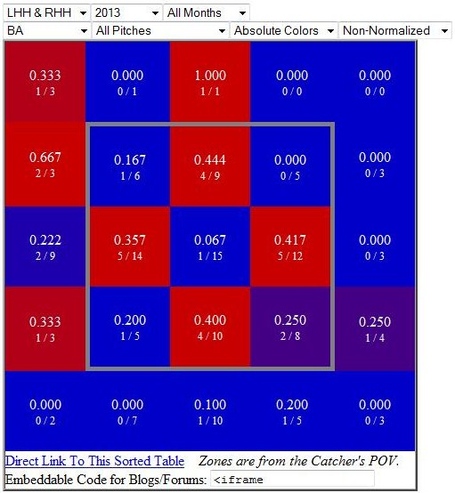 I mentioned Samardzija's worm-burning proclivity earlier. Come on down if you guessed that he's gotten ground balls with every split put in play, save two. Look with a little larger lens, and you'll see that batters are plowing infields when hitting both the split and the sinker. Aside -- what's up with the terrible performance on pitches right down the middle? 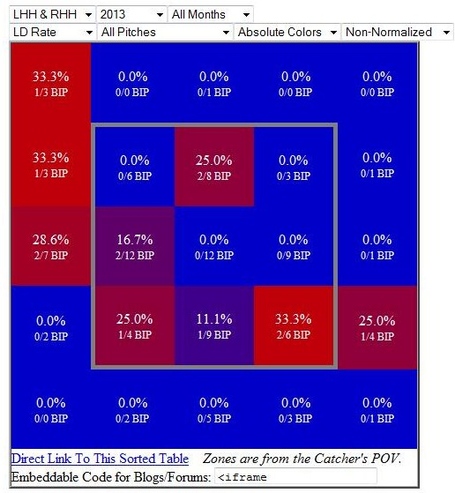 Despite working with a 94 MPH-plus fastball, Samardzija relies more on his slider and split-finger. One might simply see his 1-4 record and conclude that prior projections were accurate, and that he won't develop into a quality starter.

But that would be a mistake. Unlike in 2010, his slider and split are now both weapons. Also give credit to Samardzija for improving his craft -- he even dumped his girlfriend to make sure nothing got in the way of getting better (he did, but not really). I think there's some Gio Gonzalez-ness in him, if you squint.

On tonight: The Nats haven't fared well against the slider, but they've hit the sinker well enough. The team has looked capable at the plate recently, too (for an inning or two at a time, anyway). There will surely be strikeouts though, given Samardzija's talent and that the Nats are league average in K%.

Look for how well Samardzija is able to locate his split against what will probably be a majority-lefty lineup; it's oft refrained, but discipline against that pitch when it's out of the zone is critical to late-count success. If Jason Werth can't go, I'm hoping the real Shark comes through and rightfully stakes his claim to the name.