The Nats had missed plenty of chances, but fought against bad BABIP, unlikely misfortunes, and an umpire who had apparently never been told that home plate delimits the horizontal extent of the strike zone. 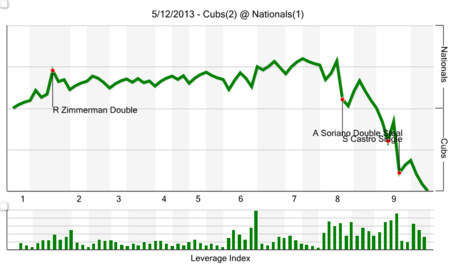 John Tumpane is bad and he should feel bad

I'll summarize: Tumpane called a bunch of strikes on pitches to RH hitters that were in the LH hitters' batter's box. He didn't give those pitches to Gio or any other Nats pitcher. His calls were so bad that Kurt Suzuki exploded into a shower of f-bombs after being rung up on a pitch a foot outside and got himself ejected. That's right, John Tumpane is so spectacularly bad at calling ball and strikes that he made the Kurt Suzuki, possibly the mellowest, most even-tempered man in all of baseball, vomit forth a hail of angry curses so vicious that he got tossed instantly. For being so bad, Tumpane can look forward to suffering no adverse consequences to his career as an umpire, steadily marching forward on the seniority list until he's just as respected and accountable for his actions as Joe West or Angel Hernandez. Great jeorb!