Home plate umpire John Tumane had an interesting take on just how wide the strike zone was this afternoon in the series finale between the Washington Nationals and Chicago Cubs. The data does not support his views about what are and are not strikes. Kurt Suzuki got tossed arguing about a called strike three...

At least umpire John Tumane's strike zone was consistent. He consistently called pitches outside and inside for strikes that hitters from both the Chicago Cubs and Washington Nationals questioned. Nats' catcher Kurt Suzuki was so upset with the Evergreen Park, Illinois-born ump's work behind the plate in the bottom of the ninth inning this afternoon that he got himself tossed after striking out looking for the second out of the home half of the frame. The umpire didn't have much to say to Suzuki or Nats' manager Davey Johnson after he called a 2-2 fastball from Cubs' reliever Kevin Gregg strike three to punch Suzuki out looking. Suzuki didn't have much to say when he was asked after the game about his rare outburst.

"I battled the count to get back to 2-2 and put myself in a pretty good hitting situation and for something like that to happen -- I thought it was a ball." - Kurt Suzuki on called strike three in ninth inning at bat

"It's tough for me to comment on stuff like that," the 29-year-old Suzuki told reporters after the game, "I can't hit for everybody else or see what's going on. He was pretty good when I was hitting. Obviously, people have their own opinions, but it's one of those things where you can't really argue much about that, I just did what I did."

Why did he do it?

"It started with 0-1 pitch," the Nats' catcher explained, "I felt that pitch was off. I didn't say much. Just a little bit. But a big part of the game. I've got my emotions running. I battled the count to get back to 2-2 and put myself in a pretty good hitting situation and for something like that to happen -- I thought it was a ball." The score was 2-1 Cubs at the time, and an odd throwing error by Suzuki in the top of the ninth had given Chicago the lead. With runners on first and second, the Cubs pulled a double steal and when Suzuki went to throw the ball to third, it hit the batter's bat in the batter's box and was redirected well wide of the bag, allowing the go-ahead run to score.

Suzuki noted that reporters probably had a better view than him. Brooks Baseball provided this view of the strike zone plot for the ninth inning at bat: 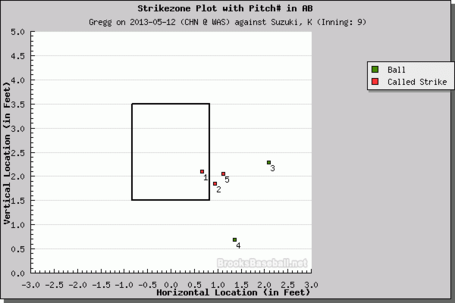 According to Brooks Baseball's strike zone plot, Suzuki had a good eye on both the 0-1 and 2-2 pitches, but as we mentioned above, Tumane was calling those pitches strikes throughout the game as you can see in the strike zone plots for the entire game below: [ed. note - "As the folks at Brooks Baseball explain, 'Each pitch is represented by a single dot. Green dots are balls and red dots are strikes.' And you can click to embiggen these for a better look."]:

By my count, (and since I'm color blind, "grossly color blind," I was told in grade school), as confirmed on Twitter by the Washington Times' Amanda Comak @acomak, there are about 10 pitches outside to right-handed batters and six to left-handers that were called strikes though they appear to be outside of the zone. Nats' SS Ian Desmond was unhappy with a called strike three in the third: 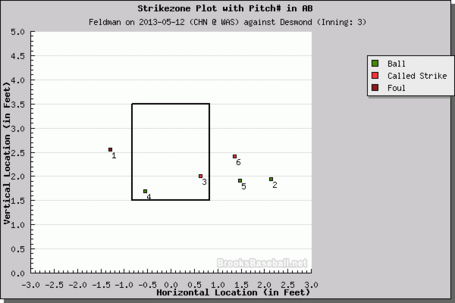 So pitch no.6 was called strike three. Not good, ump. The Nationals failed to get much offense going at all this afternoon, in part due to the umpire, sure, but they failed to score more than the one run they got in the first and an error on an odd play in the ninth cost them the game and the series with the visiting Cubs.