Los Angeles Dodgers' starter Clayton Kershaw is one of the best pitchers in the major leagues, and the Washington Nationals will face a tough challenge this evening in LA. His fastball, curve, and slider are all plus pitches, so what can the good guys do about it?

Share All sharing options for: Washington Nationals PDB: The Dodgers' Clayton Kershaw, Opposing Starter for May 14, 2013

One of the most memorable characters in American literature for me and many others is Judge Holden, the antagonist in Cormac McCarthy's unparalleled Blood Meridian or the Evening Redness in the West.

The Judge is a scalphunter in the mid-19th century, traveling with a roving band of criminals, miscreants, and other undesirables across the vast expanse of the southwestern U.S. and Mexico. A hulking albino, he's a bad, bad dude. Kid, the book's "protagonist" -- many of McCarthy's characters aren't traditional heroes -- catches on with the gang. Although he's no saint either, one thing the Judge says to him and others makes the differing degrees of badness obvious:

Take out the knowledge bit, and this describes the relentless way in which Clayton Kershaw pitches.

Kershaw, taken with the 7th overall pick in the 2006 draft, has always had a fine prospect pedigree. Brandon Heikoop of Bleacher Report reviewed the reports of major scouting services in May 2008. The Hardball Times, Baseball Prospectus, and John Sickels all endorsed the young southpaw as a special talent. For example, Sickels stated that "Kershaw projects as a number one or number two starter at the major league level, assuming his command improves and he remains healthy."

Baseball America joined the chorus too, ranking Kershaw as the 24th best prospect before 2007, and the 7th best minor-leaguer before 2008. Since putting up +1.3 fWAR and +1.4 bWAR in '08, Kershaw has ripped off the seasons you see at right. He won the Cy Young award for his efforts in 2011. Also, he led all big league pitchers in bWAR last season.

If wins are your pitcher metric of choice, he got 21 of them in his Cy year. He hasn't had a full-season ERA over three since George Bush was President. His 78 FIP- over 700+ career innings ranks 8th out of 78 hurlers. And, to round out the statistical gluttony, he ranks second among that number in K% (25.5%).

"A Legion of Horribles, Hundreds in Number"

As if he needed the help, the Dodgers ace is current seeing a career-low 17.3% line drive percentage on batted balls against. This partially explains his career-low .224 BABIP and .175 average, which could be even lower if the defense behind him were better.

How about the heater? Kershaw's 2013 fastball generates 11 inches of upward movement, 10th most in the league. Using Dave Allen's maps and combining with his neutral horizontal movement, the Texan's four seam ends up well into the negative run value area. There's a 19 MPH and fourth dimension difference between the number one and the curve, which makes the entire exercise of identifying, swinging, contacting, and succeeding against either pitch a really ludicrous proposition.

The third head of Kershaw's hydra of pitches, the slider, is getting the third most whiffs/swing among pitchers who have thrown 100 of them this year. Batters are hitting just .111 while striking out in 23 of 36 at-bats with two strikes. F.P. and Bob will just call it nasty.

Kershaw will throw each pitch over 200 times during the course of a year; here is the distribution: 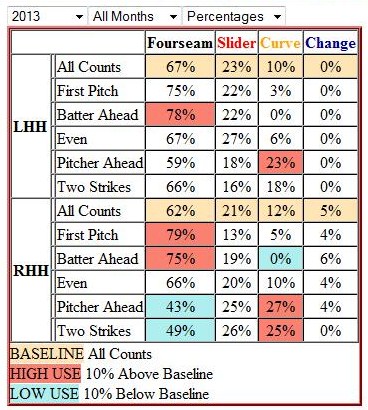 The curve shows up late against left and right handers, while all hitters can count on heat early. He's a little more reluctant to use the slider as an out pitch against lefties, but apparently it's not hurting him.

The low and in zone to righties -- low and away to lefties -- is where Kershaw gets a red whiff rate, and he generally peppers righties inside and lefties outside. As you might imagine, he's most often hurt when pitches end up middle-middle.

Kershaw doesn't give any quarter on favorable hitters' counts, either. Over 900 big league at-bats this year have gone to a 3-1 tally, where overall batters are slashing a Ruthian .353/.688/.719. On the 20 occasions over 210 plate appearances where Kershaw has gone 3-1, hitters are performing miserably (-24 sOPS+). Small sample size aside, this is what dominance looks like: Give the opposing side the best case scenario, and they still find themselves dragging the bat back to the pine. And he's only 25.

It's been stated here before, but the Nats offense isn't setting the world on fire this year. Even if they were, it might not matter. Ambushing Kershaw hasn't been all that successful (he's performing 78% better than the average hurler on first-pitch balls in play), and although he's not as tough on righties as he is lefties, it's still pretty rough going (.556 OPS). I suppose some combination of plate discipline, good BABIP fortune, and a mistake pitch or two could lead to favorable situations, but that's optimistic.

Other writers have effectively cataloged Kershaw's talents -- Johan Keri at Grantland did so just a few days ago, in fact -- but Grant Brisbee succinctly hit it when he wrote about the .gif above:

Regardless of the outcome, regardless of your team loyalties, there are moments where you can appreciate the overall design of the game -- it starts with a pitcher standing 60 feet, six inches away, and it includes a ball with irregular seams that, when gripped and spun a certain way, can make a hitter fear for his life.

Whatever in the batter's box exists exists without Kershaw's consent.