There was no update on Bryce Harper during the game, but he left after running hard into the right field wall in the fifth inning of what ended up a 6-2 win for the Washington Nationals, who got another strong start from Jordan Zimmermann against the Dodgers in Los Angeles.

Denard Span took a ride through what he described as beautiful Pasadena, California this afternoon on his way to play the LA Dodgers in Dodger Stadium tonight in Chavez Ravine. Span lined a single to short-center to start the first game of three for the Washington Nationals in Los Angeles. Legendary Dodgers' announcer Vin Scully was impressed when Nats' manager Davey Johnson made the decision to not have Span running on the 3-2 pitch from Josh Beckett to Steve Lombardozzi after the 24-year-old Nationals' infielder had fouled off a 3-1 and two full-count pitches with the speedy Nationals' outfielder sprinting toward second. Scully was impressed because Lombardozzi happened to K swinging on that pitch and Span would or at least could have been doubled up on the pitch. Span was running when Bryce Harper took a 2-2 two-seamer through second for a one-out single, however, and Span took third before scoring when Ryan Zimmerman grounded to second in the next at bat. 1-0 Nationals after a half.

Jordan Zimmermann took the mound in Dodger Stadium with a lead. Scully said that along with the Tigers' Justin Verlander, the Nationals' right-hander was considered one of the best in the game. High praise. Moments later the Nats' '07 2nd Round pick struck Dodgers' leadoff man Carl Crawford out with a 95 mph 1-2 heater. Ryan Zimmerman threw even more underhand than usually after charging a good bunt from Dee Gordon for out no.2, but Zimmermann fell behind a second-straight batter 2-0 and gave up a two-out single to right to Adrian Gonzalez with two down. One pitch, a groundout to third and a force at second later, Zimmermann was through a scoreless first on 12 pitches.

Beckett started the second at 25 pitches. 15 pitches later he was through a 1-2-3 frame at 40 overall. Adam LaRoche backhanded a grounder to first from Andre Ethier on Jordan Zimmermann's first pitch of the second. Zimmermann shook off two pitches from Nats' catcher Kurt Suzuki because he wanted to come inside on A.J. Ellis with a 95 mph 0-2 heater that was called strike three. A grounder to short from Skip Schumaker followed. Grounder. Desmond. Out. And two scoreless for Zimmermann on 18 pitches after a six-pitch, 1-2-3 second inning vs the Dodgers in LA. 1-0 Nats lead.

Zimmermann walked to start the third. Denard Span K'd swinging with his pitcher on first. Adrian Gonzalez was charged with an error when he let a playable ball by Steve Lombardozzi get by him. Bryce Harper, in old school red stirrups pulled up to meet his gray away pants at the knee, worked the count in his second at bat vs Beckett, getting ahead 3-1 and taking ball four to load the bases in front of Ryan Zimmerman. Beckett fell behind Zimmerman 2-0, and gave up a 370 ft opposite field double to right that bounced off the wall and drove two runs in to make it 3-0 Nationals early in Los Angeles. Adam LaRoche drove Harper in with a groundout to first that made it 4-0 Nats and pushed Beckett up to 62 pitches. LA's starter was at 68 when he got Ian Desmond swinging to end the top of the third.

Jordan Zimmermann pounded the zone with fastballs on his 19th and 20th pitches to get up 0-2 on Nick Punto, but the Dodgers' infielder worked the count full and lined a single to center on the ninth pitch of the AB, Zimmermann's 27th pitch, a 95 mph four-seam fastball. Dodgers' pinch hitter Luis Cruz hit a 2-0 fastball sharply back up the middle in the at bat that followed, but it started a slick 6-3 DP that Ian Desmond turned for the first two outs of a scoreless 15-pitch frame by the Nationals' starter that ended with a fly to left from Carl Crawford that Steve Lombardozzi tracked down. 33 overall for the Nat's right-hander. 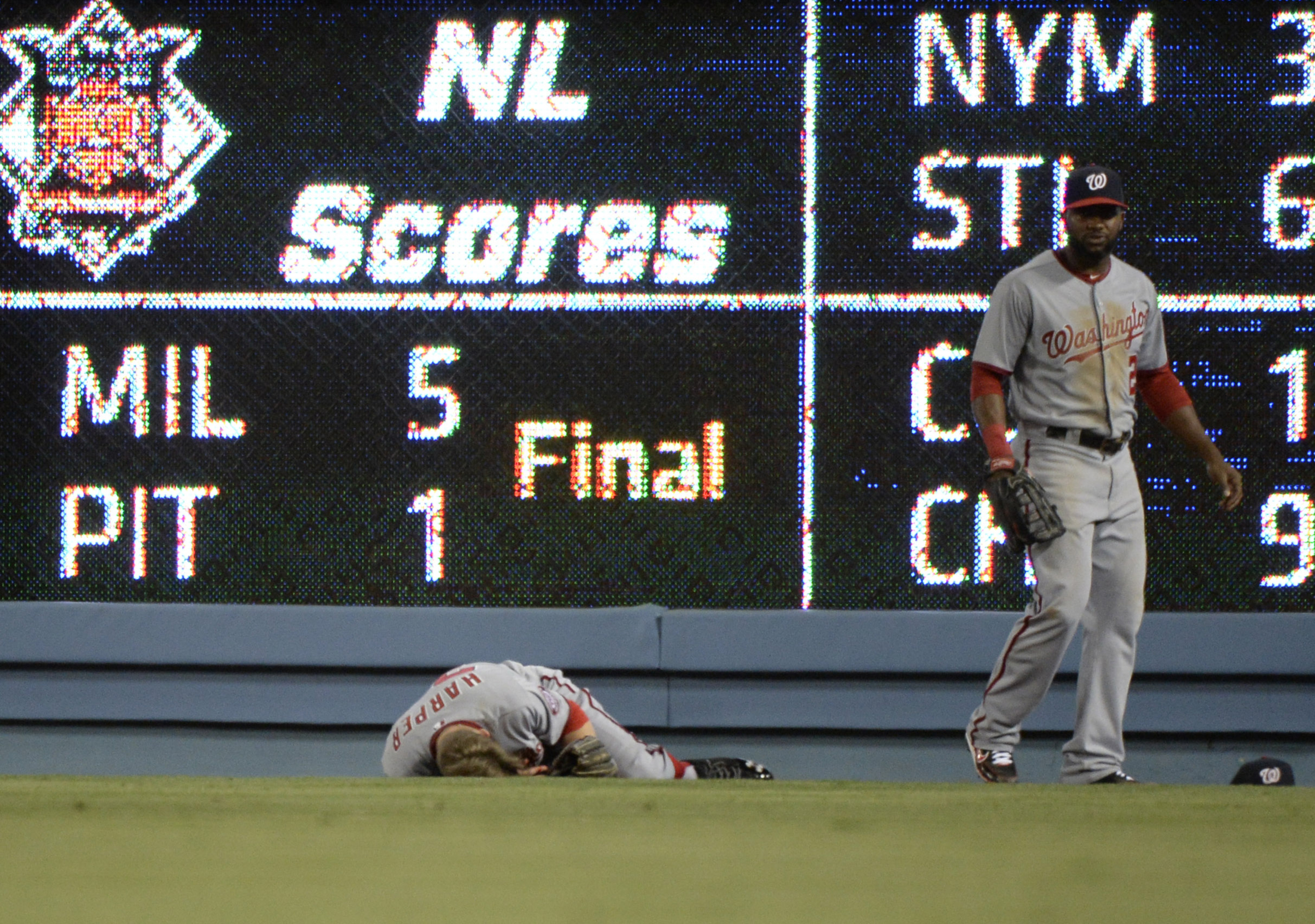 After a nine-pitch, 1-2-3 fourth by Dodgers' right-hander Javy Guerra, who took over for Beckett, Dee Gordon got LA's offense going with a line drive to center on a high fastball he had no business hitting. Gordon stole second and took third on another wild throw by Kurt Suzuki that sailed into center, but two outs later, Gordon was still standing at third after a pop to short right by Adrian Gonzalez and a swinging K by Matt Kemp, who K'd chasing a 94 mph 0-2 heater up high. Adam LaRoche fought off a bad bounce on an Andre Ethier groundout and threw to the covering pitcher for out no.3 of Zimmermann's fourth scoreless. The 12-pitch inning had him at 45 overall, up 4-0.

Denard Span, who some say plays center "like a piano, so graceful, so easy," according to Dodgers' announcer Vin Scully, worked Javy Guerra in an 11-pitch 5th inning-opening at bat that ended with a line drive to Matt Kemp in center. Steve Lombardozzi reached base on what was ruled a single after both Dee Gordon and Skip Schumaker pulled up and let Lombo's grounder get through the middle of the infield. Bryce Harper walked in front of Ryan Zimmerman for the second time tonight. Zim's 370 ft double followed in the top of the third. This time the Nationals' third baseman grounded back to the mound, but Guerra went for the double play and threw the ball by second and into center for an error instead of an out. Lombardozzi scored on E to make it 5-0 Nats and both runners moved into scoring position for LaRoche, whose RBI single to right made it 6-0 Nats as it extended his hit streak to 10 games. Ian Desmond walked to load the bases in the next at bat, but Danny Espinosa grounded into a force at home for out no.2 and Kurt Suzuki flew out to right to end the threat. 6-0 Nationals after four and a half in Dodger Stadium.

After sitting through a 39 pitch inning by Dodgers' right-hander Javy Guerra, Nationals' starter Jordan Zimmermann gave up what ended up being a triple on a fly to right by Los Angeles' catcher A.J. Ellis that right fielder Bryce Harper tracked to the wall, watching it intently over his shoulder. Harper turned around too late, just in time to run into the fenced scoreboard/wall in Dodger Stadium face first, full-steam and he looked like he knocked himself out or at least knocked the wind out and somehow cut his neck which bled as he stood and steadied himself with the help of the Nats' trainer and under the watchful eye of Nats' skipper Davey Johnson. Harper left the game, under his own power though he looked a little dazed. 'Dazed at least,' as Vin Scully put it. Ellis scored on a Skip Schumaker groundout in the next at bat to make it 6-1 Nats, but Zimmermann retired the next two batters in order to complete a 14-pitch inning at 59 overall.

Jordan Zimmermann singled to start the sixth against Dodgers' lefty J.P. Howell and two outs, a single by Roger Bernadina and walk by Ryan Zimmerman later, the Nats' pitcher was standing on third when Adam LaRoche K'd swinging to end the top of the frame. Carl Crawford hit a line drive to left and just out of Steve Lombardozzi's reach for a ground rule double that bounced and cleared the low left field wall. Two outs later, Crawford was still standing on second, however, when Matt Kemp popped out to right to end the sixth. The 10-pitch inning had Zimmermann at just 69 overall after six innings pitched.

After the Nats' starter grounded out to end Howell's second inning of work, the right-hander retook the mound and gave up a leadoff single to right by Andre Ethier. Ian Desmond dove behind second for a grounder off A.J. Ellis' bat and popped up to throw the slow-footed catcher out at first though Ethier advanced. Jordan Zimmermann threw a 1-2 fastball by Skip Schumaker for out no.2 and K no.5 in 6.2 IP and popped Nick Punto up to end a 14-pitch frame at 83 overall up 6-1 on the Dodgers.

Ronald Belisario gave up a leadoff single by Denard Span in the top of the eighth, but retired the next three batters for a scoreless top of the inning. Jordan Zimmermann popped Juan Uribe up for the first out of LA's eighth. Carl Crawford went down for a 2-2 four-seamer and lined it to right for a one-out single on Zimmermann's 93rd pitch, but he was forced out at second on a grounder to second by Dee Gordon. Adrian Gonzalez stepped in with one on and two out and singled to right to move Gordon to second, earning Zimmermann at chat with Steve McCatty. After the talk, Zimmermann left a 94 mph fastball up for Matt Kemp, who extended his own hit-streak to 12 games while driving in LA's second run. 6-2. Tyler Clippard took over with two on and two out against Andre Ethier and popped him up to left where Eury Perez caught the third out of the frame.

Matt Guerrier took the mound for LA in the ninth, giving up a one-out, line-drive single to center by Ian Desmond but nothing else. Drew Storen struck A.J. Ellis out with a high heater for out no.1 on the Dodgers' ninth. Skip Schumaker flew to left for out no.2. Pinch hitter Scott Van Slyke stepped in next and grounded to third to end it. Ballgame. Nationals win.