San Francisco Giants pitcher Matt Cain has had a rough go of it in 2013, sporting a 5.43 ERA and 5.30 FIP. Historically, Cain has been close to an average +4 win pitcher. So what's going on this year? And what can the Washington Nationals expect from the right-hander tonight?

Share All sharing options for: Washington Nationals PDB: The Giants' Matt Cain, Opposing Starter for May 21, 2013

Right out of the box today with the report on Matt Cain before the Giants face off against the Nationals at AT&T Park.

Cain has enjoyed a productive career with San Francisco, averaging +3.8 fWAR and +4.28 bWAR per season since 2006. These values mean that he has been a really good pitcher, and Cain showed a flair for perfection last year, too.

But the more numbers-inclined frequently approach Cain's success with caution. Or, as Dave Cameron at Fangraphs explained in April 2012 after the big righty signed a five-year, $110M extension,

Matt Cain is a good pitcher. How good he’d perform in another set of circumstances – different ballpark, different division, different pitching coach, etc… – isn’t quite as well determined, but we’ve got a pretty good idea that Cain is good at preventing runs in the context he’s currently in. Over the last six years, he’s thrown 1,300 innings and posted an ERA- of 80, meaning that he prevented runs at a rate of 20 percent above average. Quantity and quality is a good package. It just doesn’t predict future success as well as you might think.

Many of Cain's 2013 component numbers are similar to his career averages:

Indeed, several of the above metrics are actually better this year. Sure, you could quibble on the fastball velo, but many pitchers see an increase in speed as spring turns to summer. Furthermore, his pitch usage has remained largely the same as last year, albeit with a few more sliders to right handed batters: 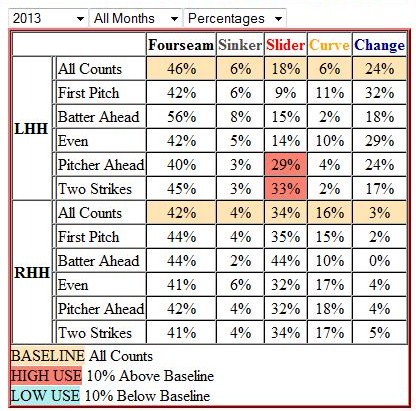 And now, time to exhume the lede: A big part of Cain's poor start in 2013 is attributable to his absurd rate of home runs to fly balls. Consider that in over 1,500 career innings before this year, the Giant posted a HR/FB% of around 7.0%. That's an above-average mark.

This year? 18.3% of fly balls are sailing out of the yard. This is closer to a batting-practice pitcher rate, and at the end of the day is about 7% greater than the league average. As you might imagine, he leads the league in total home runs given up (13). Although righties have hit him better this season, lefties have still popped 5 of those 13 home runs.

Here is the breakdown of homers by pitch, HR/(FB+LD)%, and overall 2013 usage per Brooks:

The sinker is getting hit bad, but he doesn't throw it often. For my money, the difference in fastball results seems the most salient; it's normally been the least-HR prone, but batters have flipped the script this year.

Cain isn't safe in any count, as he has given up home runs on the first pitch, when even, when ahead, and when behind. Batters have hit 30% of their home runs against him on the first offering. In sum, he's over half-way to last year's homer total (21) in just a quarter of the innings. It's been bad for Cain all-around.

On the one hand, it doesn't seem reasonable to believe that his HR/FB% will stay this high all year. The stat varies a lot, but this level of variance -- from a pitcher who is often on the good side of the metric, no less -- is surprising. On the other hand, look at where (and how far) the homers have been hit: 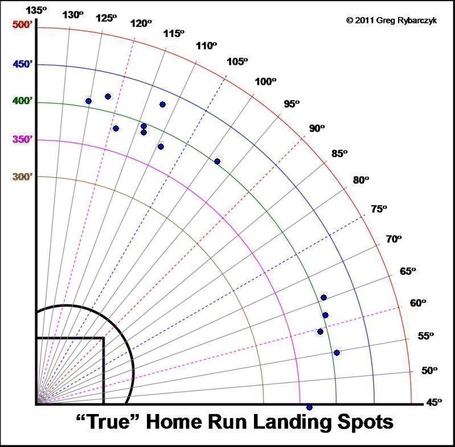 Eleven of the thirteen home runs above would leave 20 or more of the 30 MLB parks. So, batters aren't really hitting cheapies. A few have been well-placed -- see the one above the "n" in "landing," which leaves 2/3 of all parks -- but the majority are going far.

Wrapping up with some final graphics to help understand Cain's home run issues. The first image you see is the pitch location of home runs hit against the righty in 2013 (view from catcher). The second is where batters have historically done damage. Clicking the image will switch between the both. 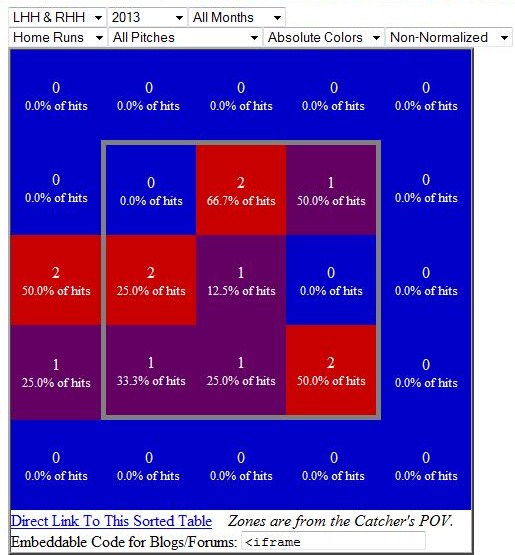 Notice the location variety on the 2013 home runs. He's not putting all of them middle-in to righties, where he's been hurt most over his career. Rather, they are up, down, inside, and outside. Getting a little more fine, he's also leaving some breaking balls over the plate, and batters are doing serious damage: 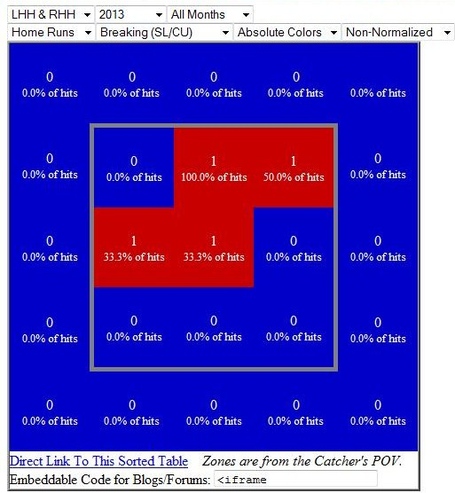 This means that damage on the fastball and sinker have come on inside (to RHH) and low pitches, where Cain has historically seen a low HR/FB%. Nothing in Cain's career profile suggests that he's overly susceptible to taters in locations where they've been hit this year, but it is also true that he is paying for breaking ball mistakes.

Cain has always been known as someone who out-pitches his peripherals. By this, most commentators mean that one should expect worse performance from the Tennessee-raised hurler based on stats that he "controls," namely strikeouts, walks, and home runs allowed. That sort of evaluation is coming home to roost this year, and perhaps some will call this long-overdue regression.

However, the weight of information (and history) seems to suggest otherwise. True, his release point has changed, leading to a more 3/4 delivery. This change may affect the breaking pitches, since it would seem to lead to more sweeping action across the plate, rather than sharp vertical break -- the kind of which stay low in the zone, away from hard contact (sure enough, the pitch is rising more this year than ever). And the fastball is going for hits more often than usual, probably due to location issues.

Anyway, I'm not sure these things turn him into 2012 Ervin Santana. I've shown above the litany of Cain's metrics that are similar to his career rates. Sure, he may post a higher than usual HR/FB% in 2013, but it would be hard to believe that number will stay over, say, 12-15% as long as all else holds.

We saw earlier in the year that Tim Hudson was probably a better pitcher than he showed up to that time. I'd place Cain in that group. It's possible that his homer-happy ways wake up the Nats' bats, but things haven't seemed to fall that way for the good guys so far. Still, if Cain shows reluctance to attack the zone in response to the blasts he's given up, discipline could lead to base runners and opportunities to score.