Kyle Kendrick is a seven-year veteran pitcher for the Philadelphia Phillies. He's accumulated some of the best results of his career so far this year, winning four games against two losses in nine starts. Improved command has helped his cause, and he may achieve his best year ever.

Succinctly, it has been unremarkable. Since he debuted in 2007 at age 22, the righty has paired a well below-average strikeout rate -- the MLB average hovers around 17-18.5%, and Kendrick has topped 12% once -- with a slightly above-average walk rate. But the Phillies have had some good teams over the years, and that has resulted in Kendrick getting win totals of 10, 11, 11, 8, and 11 when he's tossed over 110 innings in a year.

As you might expect from someone who doesn't get strikeouts and walks slightly fewer batters than the normal twirler, his WAR values haven't been great. And if you want to go by more traditional metrics, well, the chart at right makes things look reasonably better, so it's fair to adjust your perception upward if that's your thing (ERA- measures how far above or below major league average (100) a pitcher's ERA is; lower is better. 2009 was omitted, since he only pitched 26 innings that year).

Kendrick has banked some pretty good results so far this year. Currently sporting a 2.82 ERA, Kendrick has already accumulated +0.8 fWAR and +1.9 bWAR, each of which are close to his best single-season marks.

Here is how he's using his repertoire, and what results his pitches are yielding with respect to BB% and BABIP.

Getting Down: Kendrick's Sinker and Split-Fingered Fastball

Really, it's not a split-fingered fastball; its more like a split-fingered change. Fangraphs actually labels it a change, and it comes in at 83 MPH, so that's my story and I'm sticking to it. Anyway, Kendrick's main offerings are a 90.7 MPH sinker (57% usage) and the aforementioned split (24%). 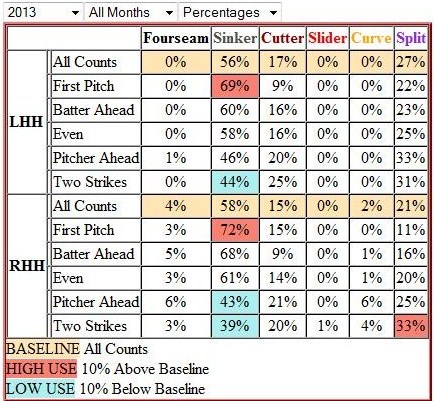 Kendrick's improved control of the split in decisive counts may be to thank for his lower walk rate. Over his career, 5.8% of batters have walked when he used the pitch with a three-ball count. This year, he's only walked two batters in 71 at-bats when the split has ended a three-ball plate appearance, good for a 2.8% walk rate.

In fact, Kendrick's split control appears to have improved across the board. For his career, the slow-rotating, tumbling pitch has gone for a ball almost 39% of the time; compare that to 2013, where he's cut that number by 7%, to 32%. 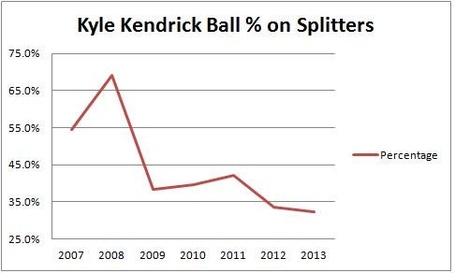 In what is probably a corollary to the above, Kendrick is getting far more swings on the split this year that normal, too: 53.6% for his career, versus 63% in 2013. But his swing and miss percentage isn't all that different this year. What's up?

His ground ball rate, is what (what, what...what). You can imagine that a pitch like the splitter -- a pitch that doesn't rotate a whole lot on the way to the plate, causing a diving action late in it's trajectory -- generates a fair number of worm-burners. This year is no exception. Batters are hitting 60% of splitters in play on the ground, a career high.

Among line drives, fly balls, and grounders, the latter has the lowest run value. So I think his improved control, swing rate, and ground-ball rate on the split may be one part of Kendrick's career-best ERA. The problem is, hitters are having success against it on batted balls, evidenced by the .310 batting average and .380 slugging percentage against the pitch.

So maybe the sinker is also pulling weight. Also: According to Baseball Reference, a sinker has less dramatic downward break than the split, if you were like me and wondering what the difference was.

The offering is getting far, far more called strikes than the split does (26% versus 4%). Expand the metric to include all strikes (well, not fouls, but those are even percentage-wise and aren't always strikes), and the sinker shows out: 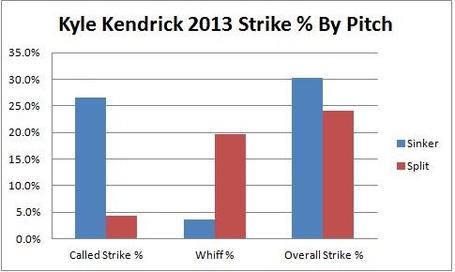 The whiff differential isn't all that surprising, considering that a sinker is supposed to get weak contact, not punch-outs. Nonetheless, the sinker isn't getting near as many ground balls (42%) as the split. What Kendrick is really doing is using the sinker to get ahead -- his ball rate for the sinker is nearly the same as it is for the split -- and batter's just aren't swinging, preferring instead to see a few pitches. Ultimately, the split is put in play more often, usually late in the count.

You can see the BABIP difference in the two pitches to the right. Stark, but somewhat understandable considering that the Texan is getting more fly balls with the sinker, which have a lower BABIP than grounders. Doubtless, he's getting bad luck with the split -- I think that's all there is to that.* However, the other side of the coin is that flies have a greater run value on average than grounders.

Kendrick's split and sinker demonstrate these two truths well. The sinker, while going for hits less, is more likely to go for extra bases (.486 SLG for the offering).

If you believe that it's impossible for a pitcher like Kendrick to have his cake and eat it too -- that is, considering his relative inability to miss bats, he can either trade off BABIP or run value -- then he seems to have (so far) struck an undesirable balance. In other words, of his two primary pitches, he's throwing most often the pitch (sinker) that generates results with a higher run value, as between grounders and flies. And, as shown above, batters are doing more damage even though they aren't getting hits as often.

Fangraphs' pitch data backs this up. His sinker is performing 8% better than the average MLB pitch, while the split is 13% better. It's a small gap, and both are on the good side of the mean, but it illustrates the point. At the same time, it seems reasonable that Kendrick goes to the sinker most because he gets more strikes with it. Maybe the damage quotient is just something he knows he has to live with, and if so, there are worse things to have than a pitcher on pace for a near-three win season.

Can it continue? Probably not. But if Kendrick can maintain -- or even improve -- his control, he'll find himself in favorable situations more often than ever, and consequently, I wouldn't be surprised to see him post some of the best numbers of his career at the end of the year.

* Addendum: BABIP also helps explain why Kendrick has left so many runners on base. With any runner(s) on, his BABIP is .240, and he's 55% better than the average pitcher. With runners in scoring position, he's making like (good) Roy Halladay and generating a ridiculous .200 BABIP, performing 65% better than average. Maybe it's the BABIP gods calling it even for the high splitter BABIP? Quick, MissB! A chicken sacrifice!