Chris Tillman follows Kevin Gausman as a heralded young pitcher for the Baltimore Orioles. His raw stuff isn't as electric as Gausman's, but Tillman has made meaningful steps to capitalize on his promise. Let's check him out before he takes on the Washington Nationals tonight in Camden Yards.

Share All sharing options for: Washington Nationals PDB: The Orioles' Chris Tillman, Opposing Starter for May 29, 2013

When they drafted Chris Tillman out of Fountain Valley High School in California in the second round of the 2006 draft, the Seattle Mariners had a valued top prospect arm that, they hoped, would solidify the front of their rotation when he arrived in the Show.

But then the M's won 88 games in 2007, and, perhaps sensing they were just a top-end arm away from contending (sound familiar?) in 2008, they shipped him, Adam Jones, and George Sherrill (among others) to Baltimore for Erik Bedard. Bedard would never pitch more than 100 innings in a season for the M's, while Tillman and Jones and Sherrill would all see productive time with the Birds.

Baseball America ranked Tillman as the 67th best prospect in the game before the 2008 season, and the 6'5 righty would improve to 24th best before 2009.

It was for good reason, since Tillman was striking out around 26-27% of batters he faced while living in towns like Everett, Washington, High Desert, California, and Bowie, Maryland. He also improved his control in 2009, walking just 6.5% of hitters.

Tillman entered what I'd call the "second segment" of his professional career in 2012. In this stage, he's bumped his K% basically up to league average, while fairly limiting walks, too. However, his HR/FB% has remained above average, and a 2.93 ERA in 2012 was supported by a .221 BABIP. This season, that number has come back to a more normal (if slightly elevated) .287.

Oriole website Camden Depot wrote in mid-2012 that Tillman was (at that point in his career) largely victimized by inconsistent mechanics, which led to similarly inconsistent stuff. But the young hurler dedicated himself to improvement before the second segment that I identified above, and the result, according to Camden Depot, was a more compact, reliable delivery.

Tillman's best weapon coming up was a hard, mid-90's fastball that sat in the low 90's, and as the velocity chat below shows, that is still generally true today. His velo dipped from '09 through '11, but recovered to the scouting assessment last year. 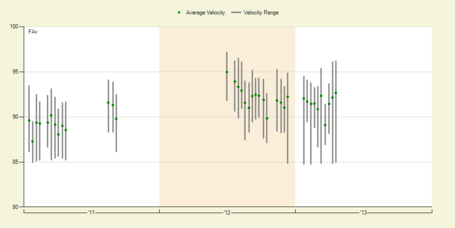 Additionally, the fastball is showing the second best vertical movement in the Major Leagues this year, ending up in the red run value zone on Dave Allen's run value/movement chart. Fangraphs' run values -- not a be all, end all, but reasonable enough here -- have the four seam as his best pitch the past two years. It's an average pitch, really, and as his staple offering (thrown 64% of the time), it's just sort of there.

What hasn't been working are Tillman's cutter and change, which he'll throw 8% and 13% of time, respectively. By Fangraphs' wRC+, these are at least 60% worse than his peers' 2013 offerings. Notably, though, his change up has been quite good over his career.

On the plus side, the curve has a 50% K% this year, and Tillman's yielded just three singles and one walk with the offering over 21 at-bats.

Camden Depot noted in their report that delivery consistency could lead to an improved fastball, which in turn would force hitters into difficult positions where Tillman went offspeed against them. This development left them with some optimism concerning the righty's future development, and I think there is something to this.

Has Sequencing Helped Tillman So Far?

I looked at Tillman's starts against San Diego and Toronto earlier this month for curve usage with hard stuff and the results he obtained. I attempted to replicate this awesome work of Yu Darvish's sequencing since that info appears missing from Brooks, but failed spectacularly.

Anyway, Tillman threw 112 pitches against the Friars, and on 14 occasions he went either fourseam-curve, curve-fourseam, curve-cutter, or cutter-curve. For each of the 14 pairings, I assigned a per-pitch value of +1 for a strike, -1 for a ball, and +2 for an out. The idea was to see if based on this limited sequence Tillman was earning favorable or unfavorable results.

There are constraints -- the relative numbers I assigned aren't linear, fouls no matter the count were counted as +1, I didn't differentiate between lefties and righties (where Tillman has a slight reverse platoon split for his career), pitchers sometimes purposefully throw balls, and a two-pitch limited sample may be affected by pitches both before and after the sequence. But like Reddington said, these things are SB Nation's fault (no, not really here).

Considering those limitations, Tillman seems to have effectively worked these sequences en route to a seven-strikeout, one run performance against the Padres. Here are the results:

Tillman got outs on the fastball-curve and and cutter-curve once each, and was ahead on the value tally on the twelve times he didn't get outs.

Against the Jays in his last start, Tillman went five innings, struck out seven, and walked none. He also gave up two home runs, and had many at-bats where batters went 6+ pitches (6 total, and a fairly even combination of 3 ball counts and hitter fouls). The latter fact contributed to his relatively short outing.

He earned one strikeout with the fastball-curve sequence, and gave up one single. He only threw back to back balls on any of the above sequences once, showing that his control on these sequences didn't significantly contribute to the several 3-ball counts he pitched to.

Tillman's release point consistency also helps to explain why a delivery overhaul may have helped his overall pitching performance and perhaps in particular his fastball-curve sequence. Look at the wide range of his 2011 releases (first image) as against the tight circular zone this year: 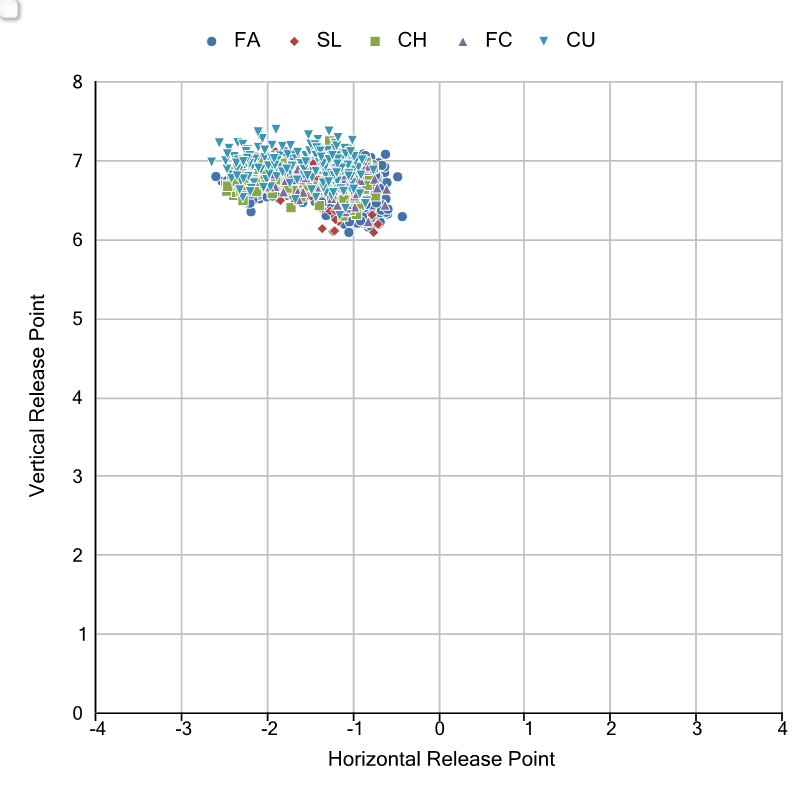 Pretty striking difference, right? It's impossible to know for sure if this has benefited Tillman, but it is reasonable to assume that he's gained from this repeatability.

Tillman may never emerge as a top of the rotation starter, but it's clear that his performance has been better in both 2012 and 2013. His delivery modifications and the apparent sequencing benefit resulting from those appear to have helped in some respect, perhaps as shown by his increased strikeout rate, for example. Considering his young age, there may yet be additional improvement to come.

Still, there are hurdles: Tillman's continued home run proneness, uncharacteristically high current LOB%, and uninspiring whiff rate each present marks to worry about going forward. For those reasons, I think on balance that the Nationals are poised to continue last night's hitting display in homer-friendly Camden Yards as the team experiences some favorable regression (Moore, Shark) and likely lineup boosts (Harper?).