A.J. Burnett has pitched well for the Pittsburgh Pirates in 2013, relying on a plus-plus knuckle-curve and a career-high K% to achieve a sub-3.00 ERA/FIP/xFIP season so far. How might Burnett approach the Washington Nationals tonight in the first game of three in PNC?

A note going forward: I was convinced recently that K% and BB% are better metrics to use than K/9 and BB/9, so I am going to employ those from now on. James Gentile at Beyond the Boxscore explains that

What happens when we use the 'per 9' metrics is that we lose accuracy, because our measurements have become subject to the tyrannical forces of BAbip. As a pitcher allows more Hits per Ball in Play, he becomes less efficient. He ends up facing more batters and getting fewer outs, which consequently means fewer innings. But if he's still striking out batters at the same rate (say 20%) all the while, his K/9 is going to look a lot shinier with those fewer Innings.

Essentially -- and Gentile later clarified what he meant when he used the term "accuracy" -- K% or BB% removes the some of the distortive effect of per 9 metrics when explaining overall performance. Here's an example:

Obviously, this is a fairly extreme example, as not many pitchers post a .345 BABIP over the course of a full season. But the hypothetical pitcher with a league-average BABIP of .297 in this table posts a K/9 of 7.65, almost a half of a strikeout per game higher than Pitcher 'F' with the low-BABIP. In my mind, this is very much a significant difference.

Burnett offers a pair of 93-MPH offerings with differing movements, although the four seam gets the most play. A close second is his curve ball, which is without much question his signature offering.

The curve is actually something of a spike or knuckle-curve. And it's nasty, too: The overall value makes it the best curve ball in the league.

Also of note is that Burnett's fastball velo is down from years' past. Despite this, he's rocking nearly his highest K% with the pitch of his career. And ditto that for the knuckle-curve. Fifty-three percent of the time a curve ends a plate appearance, it's a strikeout. The other 47%? Batters are "hitting" to an OPS of just .328.

Here's the offering in the wild, thanks to Jeff Sullivan's Pirate catcher-skill article on Fangraphs:

More generally, curb any doubt about Burnett using an Arroyo "pitch backwards" approach; early in the count, batters get the fastball or sinker, and when he's ahead it's better than a coin flip that lefties and righties will see a curve.

The infield fly ball and BABIP figures stand out a little bit, but the latter may be explained in part by a LD% that is almost 3% greater than his career average.

Striking out a ridiculous number of batters will get you over a .100 point difference between your BABIP and opponents' average (.211!). Take every qualified pitcher since 2000 (1,243 hurlers), and that difference (0.111) would be 4th most all-time. This is mostly a function of limited data this year I'd figure, but it brings home the point sufficiently (Randy Johnson's 2001 was nuts by any measure, not the least of which was his 0.115 difference over the entire season).

Unsurprisingly, Burnett has tossed the most curve balls in the league this year -- over 200, in fact. And why not? He's getting an above-average amount of swings on the pitch, and the second most swings and misses (46.74%) within that subset. So, batters are coming up empty 47% of the time that they swing at Uncle Charlie. It's a good thing, too, because Burnett isn't too good at getting called strikes with the pitch, ranking a paltry 62rd of 75 (.34) with his called strike to ball ratio among hurlers who've thrown 50 or more curves.

Burnett's game, then, is a). throwing a curve well enough to convince batters to swing; and b). getting swings and misses (and outs, based on when he usually throws it).

How is he accomplishing a).? By getting a ton of late, downward break to the bottom of the strike zone. Here's a side view. Look at the height of the yellow dot over 2/3 of the way to the plate -- around the "cutout" dirt area in front of home:

From above, we know the fourth yellow dot from the right is where the curve often crosses the front of the plate. Below, just 5 yellow dots closer to Burnett (or upward, if you like) is the height of the pitch with only about 17 feet left in the pitch trajectory (roughly the top of the box; it's a little hard to pinpoint just looking below) . In that time, the half-tumbling, half-fluttering knuckle-curve nosedives almost the entire height of the strike zone. Put in other words, assuming a release 55 feet from the batter and an entry speed of 70 MPH, that's over 2 feet of break in .15 seconds. 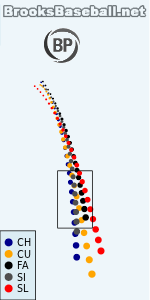 Consider that .15 seconds is also the time it takes most batters to swing, and you can see where things get really difficult really quickly.

As if that wasn't enough, swings and misses on the pitch are in pretty unhittable locations. Compare location in 2010, when his curve was getting lit up like Christmas, and this year. You'll note when clicking between that Burnett left more curves middle-middle and center-medium low to righties in 2010, whereas this year he has (so far) kept the pitch down/down and away from righties (view from catcher): 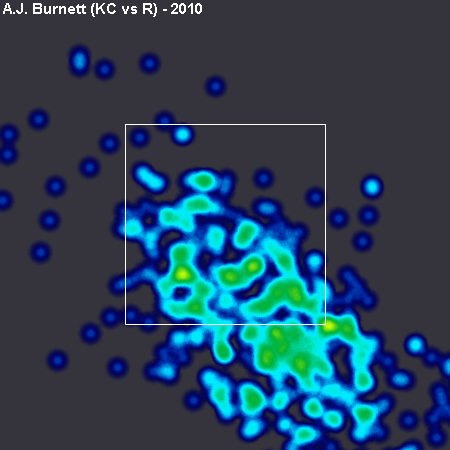 All those whiffs are coming low and away to righties, and low and in to lefties so far:

Whether Burnett has a greater "feel" for the curve this year is unclear; on the one hand, some believe his command overall has improved. On the other, his BB% sits right at his career average. Nor is his called/strike ball ratio great. Perhaps he's just locating the important ones?

The Nats will face a tough assignment if 2013 Burnett continues to show up. True, the team has a positive run value against the curve (if only slightly), and they aren't close to the most free-swinging team in the majors (17th of 30), but the way Burnett has pitched, it hasn't much mattered. Somewhat similar to Tim Hudson, it's unlikely Burnett will achieve these numbers by the time the calendar turns to October. Optimism seems appropriate for that reason, and particularly if Span and Harper are able to work counts early by laying off pitches that can't be squared up.