This Pitching Daily Brief looks back at Braves' RHP Julio Teheran, who opposes the Nats this evening in Atlanta. Because it's a shorter analysis, I also checked in on Washington Nationals' starters Jordan Zimmermann and Gio Gonzalez.

I covered Julio Teheran, Jordan Zimmermann, and Gio Gonzalez earlier this year, so I think enough time has passed to see what's going on now. Although the season is fairly young, some interesting trends are emerging.

When I wrote about Teheran in April, I focused mostly on his development through the minors and how his prospect star rose dramatically on the heels of an incredible 2010, but then faded. Some of his performance decline paralleled tinkering with his delivery, as .gifs and videos in the post show. And these delivery changes, in turn, may have resulted in his stuff being less effective: J.D. Sussman observed that earlier this year his four seam lacked appreciable arm-side run, and his curve had what was effectively a "one-plane" break. BrooksBaseball's data backed this observation up.

The four seam is still showing less arm-side run, but it seems his curve has regained its previously-lacking vertical break, and then some:

Unfortunately, the pitch is getting hammered to the tune of a .375 batting average and .563 slugging percentage. It won't continue to go for hits (as it presently does) 45% of the time, so despite what has happened, there is reason to think that the curve will get better.

Tonight, you might watch to see how effective Teheran's curve ball is, whether he's getting grounders, and if he's able to continue stranding folks like Royal Caribbean.

Jordan Zimmermann had a really good 2012. Notwithstanding his start Wednesday, he's had an even better 2013. When I looked at him this past offseason, I mostly focused on whether he would use his changeup more, as he said he would. He's throwing the pitch 4% of the time this year, compared with 2% last year. So, I suppose he's kept his promise.

On balance, the change has seen fairly mediocre results. Batters have five hits in twelve at bats, and he's not getting a lot of whiffs (if he had thrown five more of 'em, he'd be next to last in the league in whiff/swing). But, on the plus side, he is able to throw it for strikes better than his peers (.64 called strike to ball rate, which would be third in the majors).

An offshoot of my look at his changeup development was what it would mean for his performance on 1-2 and 2-2 counts, where the righty was quite poor in 2012 (169 sOPS+ former, 163 sOPS+ latter, 69% and 63% worse than major league average, respectively).

The story on those counts this year? Completely different. He's performing 20% better than the average major league pitcher on 1-2, and has a -39 sOPS+ on 2-2 (it sounds ridiculous to say "139% better", but I suppose it is true). When we think about what it takes to go from really good in 2012 to where Zimmermann is this year, performance in these counts has to be cited as one area where he's made progress.

Zimmermann's changeup isn't to thank, however, since he's only earned one out, total, with the pitch between both counts. The slider, on the other hand, has been ruthless: In 19 slider at-bats ending on 1-2 or 2-2, batters have hit one single, and one double. That's it, and that's one reason why he's done better this year.

However, look at the batting average difference in location on the heater each year: 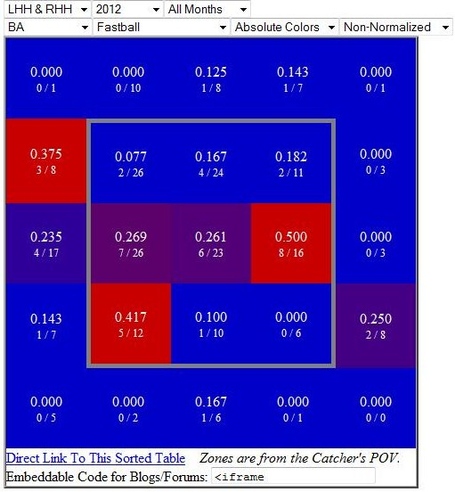 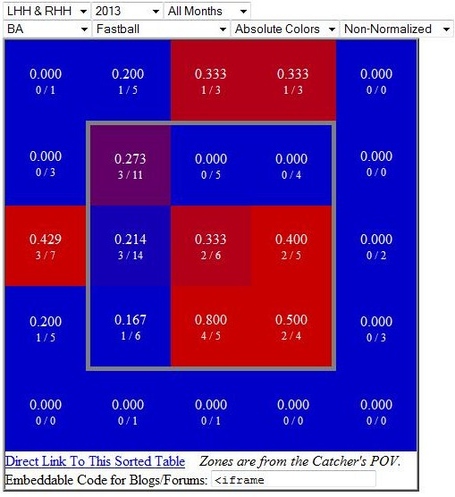 Batters are tagging the fastball more in 2013, and that's leading to his current .258 BA/.452 SLG line, compared to last year's .205 BA/.323 SLG. What is more concerning is that this year more closely mirrors the historical performance of his fastball than last year. Sure, his BABIP on the pitch is .352, but he's giving up lasers all over the park (29% line drive rate on the heater).

Perhaps a large part of Gio's 2012 was built on his historic performance against pitchers rather than a strict skill-based development; it's most likely some of both, I think. I also believe the LD% and BABIP will come down a little, considering all the similarities between this year and last, but it needs to start happening.

One more note on Gio: Although his curve is getting great results, he's throwing it for a ball more often and getting fewer whiffs (rate-wise) than last year. We've seen how he's tended to "fly open" occasionally. Check out below, and you'll notice that the number of curve balls he is releasing from a more horizontal arm-angle -- or right of the "2" -- this year appears to equal or exceed all of last year's total (2012 is first, view from catcher. The image with the greater number of data points is 2012): 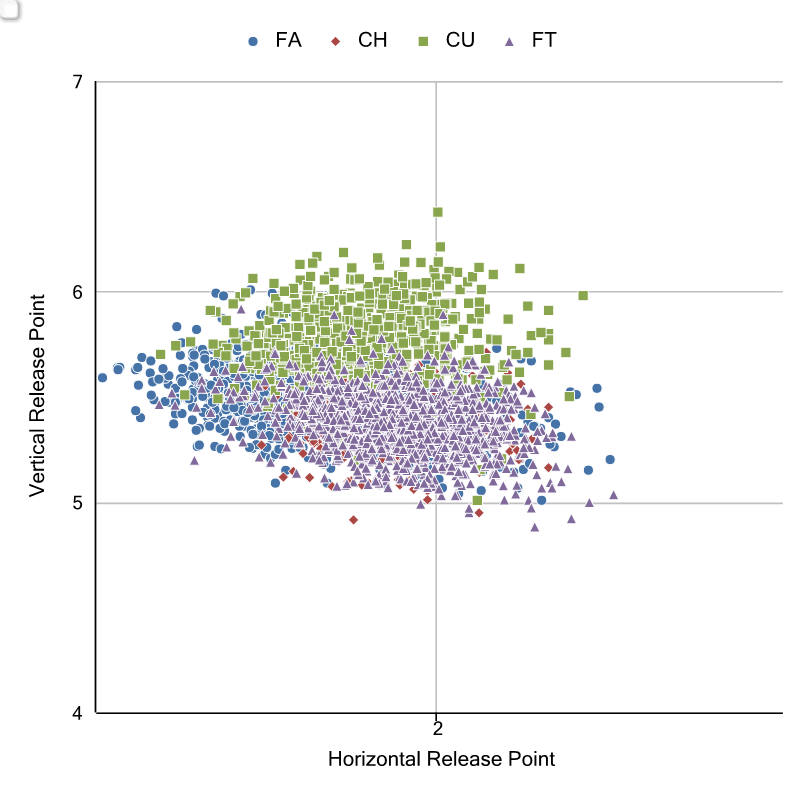 Pitch movement data also shows that his curve is getting more horizontal movement and less vertical movement than last year. I think it's fair to assume that his differing release point is contributing to this, but again, it hasn't really affected the results he's earned (other than perhaps increasing his offerings outside the zone). I'll be interested to see how his curve release point progresses from here, and with it, the effectiveness of the pitch.

Thanks to Baseball Prospectus, BrooksBaseball, and Fangraphs for statistical information.