Washington Nationals Rewind: Davey Johnson On Bryce Harper's Ejection - "I Was Gonna Give Harper A Day Off, But..."

Bryce Harper got tossed out of the series finale between the Washington Nationals and Pittsburgh Pirates this afternoon, but the Nats beat the Bucs 6-2 anyway, to take two of three on the road in PNC. Davey Johnson talked about the ejection after the game...

Share All sharing options for: Washington Nationals Rewind: Davey Johnson On Bryce Harper's Ejection - "I Was Gonna Give Harper A Day Off, But..."

"I was gonna give Harper a day off," Davey Johnson joked with reporters after today's 6-2 win over the Pittsburgh Pirates, which saw 20-year-old Washington Nationals' slugger Bryce Harper got tossed in the top of the first inning after getting punched out by 3B ump John Hirschbeck on a check-swing strike three.

"But I didn't expect it to go that way," Johnson laughed.

"I was gonna give Harper a day off," Davey Johnson said, "But I didn't expect it to go that way." - Davey Johnson on Bryce Harper's ejection

Harper has been playing with pain from a bruised side since he collided with the right field fence in Turner Field in Atlanta, and he kinda bit on a 2-2 bender from Pittsburgh Pirates' starter Wandy Rodriguez, but thought he'd held up. Hirshbeck disagreed and a standoff ensued with Harper staring out toward third and gesturing toward the veteran umpire. Hirshbeck walked toward home, gesturing back, talked to Nats' third base coach Trent Jewett then watched as Harper walked toward the dugout and slammed his bat and helmet. Then Hirshbeck tossed Harper.

Davey Johnson came out to argue.

"He raised the bat," Johnson said, "I got on John a little bit. 'John, you know, he's young, temperamental. He raised the bat. You didn't have to walk toward him.'" The Nats' 70-year-old skipper admitted, however, that Hirschbeck was right. "He made the right call," Johnson explained, "But Harp's gotta understand, that's what happens."

According to reporters who spoke to Harper after the game, the Nats' 2010 no.1 overall pick declined to criticize the umpire's decision:

Bryce Harper very careful not too say anything about ejection. Would only say he's glad it didn't cost #Nats the game.

Bryce Harper said he didn't want to "badmouth anybody." He said some variation of, "I'm just happy we got the W" no fewer than five times.

"First of all, he put both arms up in the air. To me, I felt like that’s showing me up." - Umpire John Hirschbeck as quoted by MLB.com's Bill Ladson

John Hirschbeck told his side of the story to a pool reporter after the game. MLB.com's Bill Ladson quoted the umpire on Twitter:

"First of all, he put both arms up in the air. To me, I felt like that’s showing me up. I yelled at him and warned him to stop. And then he continued and he slammed his bat down. I actually warned him again and then the next thing he slammed his helmet down and I felt three warnings are more than enough."

As the Washington Post's Adam Kilgore added, when asked about the notion that fans come to watch a player and not the umpire, Mr. Hirschbeck said, "'He needs to think of that next time. ... It’s not my job. It’s his job.'" Davey Johnson may have agreed with the umpire's call and decision, but it didn't make it any easier to lose the outfielder. "You always hate to lose any player in the lineup," Johnson said, "and Harp, you hate to lose Harp. But he's been a little bit tired here lately, so, it was okay with me."

"But I don't like to see any of our guys tossed out," Johnson said, "I said, 'John, call him out and turn around. Don't keep looking at him.'"

Summing things up, the Nationals manager simply that the umpire was right.

"He made the right call," Johnson said, "What can I say? I just wish he hadn't made it. I never want to lose anyone, like I said, and I definitely don't want to lose my three-hole hitter."

Harper's replacement, Roger Bernadina, went 2 for 4 with a run scored and made a diving catch in the outfield in the eighth that made one Shark-loving family's day. [CHOMP!]: 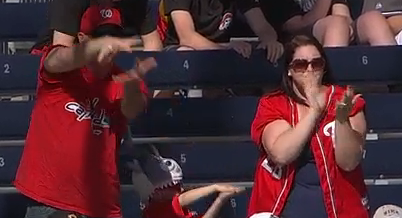