The Washington Nationals start a three-game set with the Detroit Tigers tomorrow night. That's right. No baseball today, from the big league team at least. There's some minor league action if you're starved for baseball. Jordan Zimmermann on the mound in D.C. Tuesday... till then, links and lots of them.

Share All sharing options for: Wire Taps: Washington Nationals Take 2 Of 3 In PNC; Head Home To Take On Detroit Tigers

So, apparently putting change into the wrong meter when you park your car on the street is not an excuse that can get you out of a parking ticket... ok, I didn't actually argue that it should, that would have been too embarrassing. But I did have to run out to the local courthouse this morning to pay a $30 fine for inserting my quarter in the wrong slot. Seriously, I should have taken a picture of the setup of the meters, it was a little confusing... Anyway... that's just my way of explaining the link post once again being the lunchtime reading variety, but with the off day today it serves as a nice kind of wrap-up to the weekend that was which saw the Nationals take two of three in PNC to end their seven-game road trip through Atlanta and Pittsburgh at 4-3 and 17-15 overall. What follows are a lot of links about Bryce Harper getting ejected mixed with pics from the last homestand to get you back in the mood for live baseball in the nation's capital and show you all the "great" arty tilt-shifted Instragram'd images you're missing if you don't follow us on the Twitter:

• "The club's games are still broadcast across most of the same region, but the Orioles now share much of it with the Washington Nationals, who are ensconced in a population-rich portion of what was once the Orioles' domain." - "Orioles and Nationals have complicated relationship when it comes to marketing" - Jeff Barker, Baltimore Sun

• "[Bryce] Harper raised his hands in protest, with the bat over his head. [John] Hirschbeck, in his 29th season as an MLB umpire, started yelling at Harper and walking toward him." - "Bryce Harper ejected in first inning arguing check swing" - Adam Kilgore, Washington Post

• "[Bryce] Harper stood outside the batter's box, stared at Hirschbeck for a few moments and dropped his bat. Hirschbeck then gave last year's NL Rookie the Year the thumb." - "Nationals' Bryce Harper ejected against Pirates" - AP/WTOP.com

• "It marked [Bryce] Harper's second career ejection. The first one came on Aug. 29, 2012, against the Marlins after he slammed his helmet down while trying to beat out a ground ball." - "Harper tossed for arguing third-strike call" - Bill Ladson, nationals.com: News 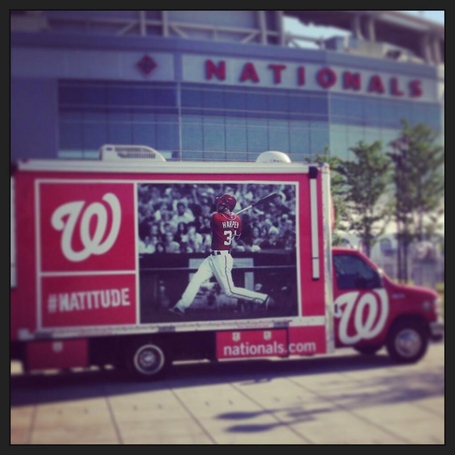 • "At their current rate, they'll attract almost 2.6 million fans this year, just shy of what they drew in 2005, their inaugural season in the larger RFK Stadium." - "Nationals fans proving D.C. is a baseball town after all" - Phil Wood, WashingtonExaminer.com

• "[Wilson] Ramos said he was happy to see his name in the lineup for the second consecutive day. Entering Sunday, the Nationals were 7-2 when Ramos starts." - "Feeling good, Ramos makes back-to-back starts" - Bill Ladson, nationals.com: News

• "'Across the board, we’re not playing up to our potential,' Johnson later told reporters. '(Let’s) make it simpler. Let’s keep having fun. Let’s do the things we’re capable of.'" - "Just like the weather, the Nationals' offense is sure to heat up as well" - Amanda Comak, Washington Times

• "The Nationals are close to having their full lineup again. Jayson Werth should return from his left hamstring tightness." - "The Nationals’ offense may be coming alive" - Adam Kilgore, Washington Post

• "So much for a monster inning or an overwhelming deficit. If anything, the way the first inning played out might've given the Nats some momentum." - "Nationals Pastime: Hearing from Espinosa, Moore, Gonzalez and more after Nats' 6-2 win" - Dan Kolko, MASNSports.com

• "[Anibal] Sanchez will face off against Jordan Zimmermann, one of the few pitchers off to a stronger start this season. Zimmermann enters Tuesday with an 18-inning scoreless streak." - "Detroit Tigers at Washington Nationals - May 7, 2013" - Andrew Simon, MLB.com Preview

• "The pitching is still somewhat inconsistent, but as a whole, the offense might be starting to come alive a little bit." - "Nationals Pastime: Heading home and heating up" - Dan Kolko, MASNSports.com

• "Nationals outfielder Jayson Werth missed the three-game series against the Pirates because of a tight right hamstring, but is hoping to play against the Tigers on Tuesday." - "Werth aiming to play Tuesday against Tigers" - Bill Ladson, nationals.com: News

• "As I have talked about the past few weeks, Johnson said early in April he would like to ease his starters into longer games." - "Getting Nationals starters to go distance becoming Johnson's strategy" - Byron Kerr, MASNSports.com

• "After a long trip, the Nationals will enjoy a day off Monday before opening an odd, two-game, interleague series with the Tigers." - "Instant analysis: Nats 6, Pirates 2" - Mark Zuckerman, NatsInsider.com

• "[Bryce] Harper, who is nursing a sore left side, wouldn't say what happened during the incident. In fact, he said he didn't know what caused it." - "Washington Nationals at Pittsburgh Pirates - May 5, 2013" - Bill Ladson, MLB.com WSH Recap 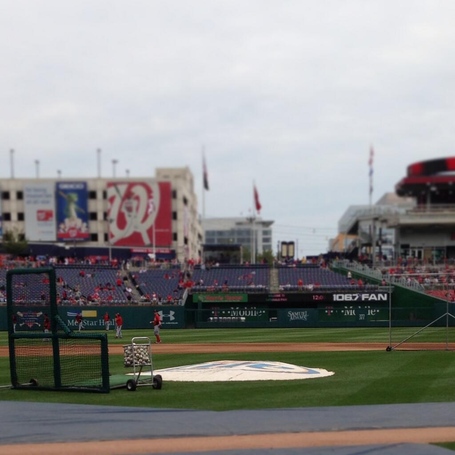 • Your Daily Message From The Dalai Lama On Twitter (@DalaiLama):

Anger destroys our peace of mind and our physical health. We shouldn’t welcome it or think of it as natural or as a friend.

• "An umpire ejected Bryce Harper of the Washington Nationals for the second time in his career Sunday afternoon after he argued a check-swing call for strike three in the first inning." - "Bryce Harper ejected by John Hirschbeck, but he finds his cool later" - David Brown, Big League Stew - Yahoo! Sports

• "Denard Span was back in the Nationals lineup yesterday after missing a game due to a unfortunately angled foul ball." - "Roto Riteup: May 6, 2013" - Zach Sanders, FanGraphs Fantasy Baseball

• "'We had a chance to push [Gio Gonzalez] out the door, or at least create some separation,' Pirates manager Clint Hurdle said." - "Pirates fall flat against Nationals" - Rob Biertempfel, TribLIVE

• "With the game barely underway, Gio Gonzalez found himself surrounded by Pirates, backed into the corner of the ring with the end of the round nowhere in sight." - "Pirates fall to Nationals, 6-2" - Bill Brink, Pittsburgh Post-Gazette

• "Coming into this year, you could have argued that the Nationals had more talent, on paper, than any other team. That talent, to date, hasn't produced the expected results." - "Jonah Keri ranks the MLB teams" - Jonah Keri, Grantland 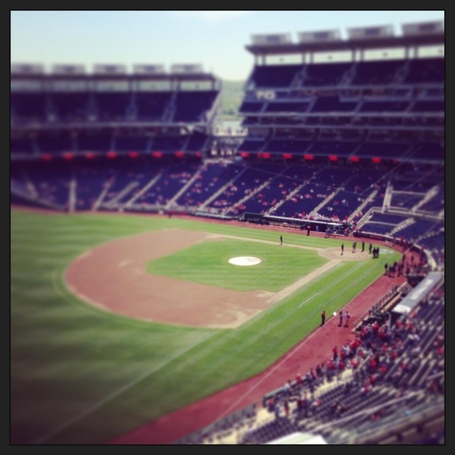 • Class-A Potomac: "And then there is the return of right-hander A.J. Cole. He was traded to the Oakland A's last offseason. After struggling a bit in the high Single-A California League, Cole settled down and started to get rolling." - "A.J. Cole's gem a good sign of things to come" - Byron Kerr, MASNSports.com

• Double-A Harrisburg: "This week we highlight former Senators RHP Jordan Zimmermann, who's off to an outstanding start with the parent Nats." - "Jordan Zimmermann, converted pitcher Micah Owings among those in our Harrisburg Senators' organizational glance" - Geoff Morrow, PennLive.com

• Double-A Harrisburg: "Anthony Rendon and Destin Hood had two hits apiece, but the Senators went 1-for-14 with runners in scoring position and stranded 11 on base in a 6-1 loss to the Binghamton Mets before 4,158 fans at Metro Bank Park." - "Sens Drop Rubber Game to B-Mets 6-1" - Marshall Kelner, Harrisburg Senators News

• Triple-A Syracuse: "The Syracuse Chiefs, the Triple-A affiliate of the Washington Nationals, dropped an 11-inning heartbreaker to the Norfolk Tides on Sunday in a 6-5 loss." - "Tides clip Chiefs in 11-inning thriller" - Syracuse Chiefs News

• Triple-A Syracuse: "The top affiliate of the Washington Nationals banged out 15 hits - and the Norfolk Tides committed five errors - as the Chiefs got their tenth win of the season, 9-1, on Saturday on the road." - "Chiefs break losing skid in big way, Ohlendorf sharp in win (Ohlendorf audio interview)" - Ben Meyers, The Auburn Citizen 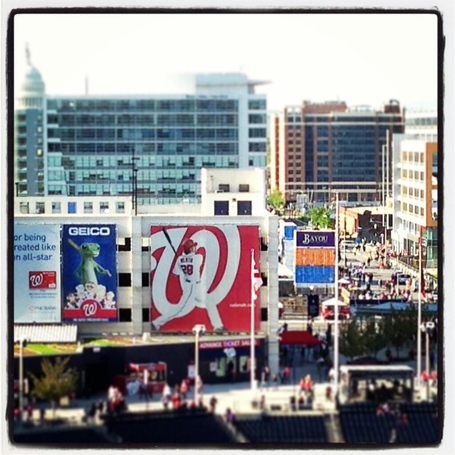 • "In Pittsburgh, where the Nats have not won a series since 2010, the Nats took two games from a Pirates team that had won six of nine, including a series win over St. Louis." - "Nationals Buzz: Weterans, bench finally getting into the swing of things" - Marty Niland, MASNSports.com

• "Video of Bryce Harper's ejection against the Pirates" - Nats Enquirer

• "The Washington Nationals took two of three on the road in Pittsburgh, winding up the Pittsburgh trip with a 6-2 win." - "Nats Down Pirates 6-2" - Mark Buterbaugh, DC Pro Sports Report

• Mets: "Jon Niese was brutal, the defense behind him lethargic and the offense lacking against Braves ace Tim Hudson. Other than that, it was a great afternoon of baseball for the Mets." - "Mets, Jon Niese battered by Braves in Atlanta" - Mike Puma, NYPOST.com

• Phillies: "I can't put any blame on Phillies management for this. If your two-time Cy Young Award-winning pitcher tells you he feels fine and wants to pitch, you send him out there." - "What’s up, Doc? Roy Halladay finally has the answer for Phillies" - John Smallwood, Philadelphia Daily News

• Marlins: "Angered by an unflattering newspaper article, inspired by the unbridled energy of a rookie and aided by the feeble pitching of a former ace, the Marlins looked like some other magnificent team Sunday and not the one that started out losing 22 of its first 31 games." - "Kevin Slowey gets first win in nearly three years as Marlins pound Phillies" - Clark Spencer, MiamiHerald.com