The Washington Nationals have never beaten Anibal Sanchez, who is undefeated against the D.C. squad in his career. Rather than the traditional breakdown, this PDB analyzes his 2013, along with each time the righty has opposed the Nats.

Anibal Sanchez has had a pretty spectacular 2013 so far and has also owned the Nationals throughout his career, going 8-0 over 19 starts. For the Nats, familiarity must be breeding contempt. How is he accomplishing his results?

Interestingly, he throws the change to same handed batters (righties) nearly as frequently as he does lefties, which is not really normal -- typically, change ups are thrown to opposite handed batters far more often.

What has been the secret this year for the career 3.69 FIP/3.96 xFIP pitcher? Well, Sanchez's change has been worth +4.2 runs per 100 pitches, which is good for third best in the major leagues. Several other stats stand out, specifically those pulled to the right: The Venezuelan's K% and HR/FB% are career-best numbers.

Concerning the strikeouts, Sanchez's PITCHf/x data shows that he is generating more whiffs/swing on nearly all of his pitches this year. Unsurprisingly, the nasty change leads the way. But Brooks registers his 2013 pitch usage, velocity, and movement as largely similar to 2012 and 2011. So, repertoire and pitch speed/trajectory don't really explain the strikeout increase. 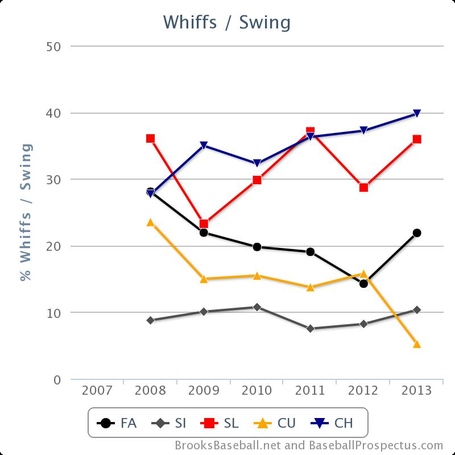 Logically, what is different is the percentage of contact generated off Sanchez's offerings. Batters are hitting the ball nearly 10% less often when a pitch is outside the zone this year when compared to his career rates (52.1% to 61.6%). Where previously those pitches were fouled off or hit weakly, batters are whiffing on a rate basis more often than usual in 2013, as the click to switch graphic shows: 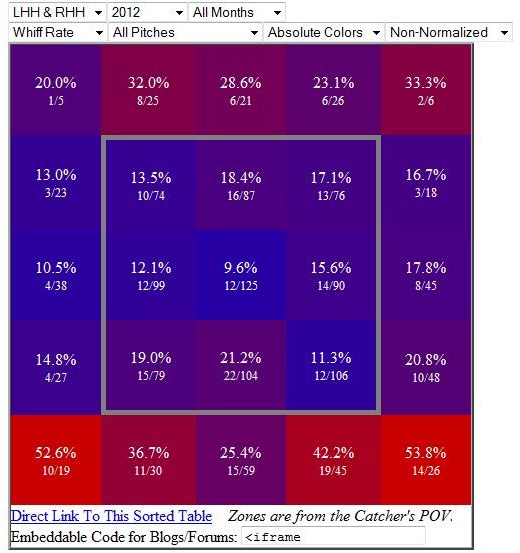 Click to switch between 2012 and 2013 whiff rates. Courtesy
Baseball Prospectus.

You can see how 2013 Sanchez is getting more swings and misses in non-strike locations. 2012, though, was more in line with his career figures. Considering this, and knowing his velo and movement are largely the same this year as they have been in years' past, I'm not sure I would bet on these particular 2013 results holding over the long run.

Still, Sanchez has banked some serious performance already this season -- see his seventeen strikeout game against the Braves for evidence -- and he'll come at the Nats with several quality offerings regardless of his pitch location.

Likewise, you can count on that HR/FB% going up, and that's all there really is to say about that.

Sanchez Against the Nationals Over Time

Federal Baseball knows Sanchez has dominated Washington ever since the franchise made the trip south across the border. Sanchez's stats against the Nats are below.

Probably no shocker, but it's nice when the stats match the impression.

I took a look at Brooks' game logs for each start Sanchez has made against the Nats and tried to identify something (anything!) he may be doing against the good guys to succeed.

Between 2008 and 2010, Sanchez made six starts against the Nationals. When he ended an at-bat with a strikeout, he often pitched away from right-handers, and in to lefties (all views from catcher, all images courtesy Brooks Baseball). For example:

On the rare occasion where a hit went for extra bases, the ball was elevated:

There's a decent amount of contact against Sanchez during this time, but batted balls are just going for outs rather than hits.

In 2011, Sanchez again achieved success against the Nats by getting strikeouts down and away, while also seeing limited damage on pitches over the middle. This start, from May 8 of that year, demonstrates that desirable pairing well: 2 hits versus 11 strikeouts and no walks over seven innings. Washington made nearly as many outs outside the strike zone (9, by my count) as they did inside the zone (13).

The Nats showed better plate discipline later that year, touching up Sanchez for three runs (two earned) over five innings while drawing five walks against "just" five strikeouts. And what is more, the Nats even won the game in a classic (click it, click it, click it). You can also see more solid contact (lineouts) when he ventured over the middle of the plate:

In Sanchez's first of two starts against the Nats last year, he continued to generate punch outs by going away to righties (in to lefties). The NL East Champions did pop two solo home runs when he left them middle-in to righties, but were unable to generate any more hard contact.

The Nats' last faced Sanchez on May 29, 2012. He went seven innings, striking out five against just one walk and one unearned run. This time, the Nats struggled more on pitches inside to righties, and were similarly (again) unable to do much on their contact opportunities over the plate. They also expanded the zone low a fair amount in grounding out:

Looking backward, we see just how Sanchez accomplished his results. The veteran's strikeout percentage versus the Nats (25%) is better than his career average (20%), and his BABIP is lower, too (.252 against D.C., but .305 career). Many times, the Nats expanded the strike zone. Combined with their additional trouble generating hard contact inside it, one can start to offer some explanation of his success.

Of course, there are several things to note: these results were against different players at different times, and getting weak contact/having batters expand the zone can hurt any team. So, as many readers suspected, there is really not much to take forward. It is interesting in retrospect, however, to add some substance to Sanchez's dominance.

Historically, Sanchez has obtained a fair number of his strikeouts on down and away breaking balls. This has changed somewhat in 2013, but I don't think that trend will last if hitters understand where he's getting his punchouts this year.

But that doesn't mean the Nats can, or will, get to Sanchez; after all, they've yet to beat him. And as imperfect as the "loss" stat is, I'd venture that any Nats stat head -- indeed, any fan -- will simply take a curly W against Tigers' righty, regardless of his underlying performance.