Washington Nationals' first baseman Adam LaRoche went out on the recently-completed road trip mired in a brutal slump that Nats' skipper Davey Johnson knew he'd eventually get through. LaRoche had a strong seven-game stretch in Atlanta and Pittsburgh, and appears to be on his way to turning things around...

The last time Washington Nationals' manager Davey Johnson addressed the issue of Adam LaRoche's struggles at the plate with reporters in the nation's capital, after the Nats' homestand-ending loss to Cincinnati, LaRoche was coming off an 0 for 24, 11 K performance in consecutive series with the St. Louis Cardinals and Reds. That troublesome seven-game stretch left the 33-year-old, 10-year veteran, who signed a 2-year/$24M dollar deal with Washington last winter, with a .135/.210/.270 line, one double and three home runs in 22 games and 81 plate appearances.

"It's just little things," Johnson said during the homestand, "His timing's a little off. Maybe his pitch selection is a little off, trying to make something happen. But he's a veteran hitter. He's a heck of a good player. He'll be fine. He'll come around." Before they left for Atlanta, Johnson talked again about how confident he was in LaRoche's ability to turn things around. "He'll be fine," Johnson told reporters, "Going to Atlanta and Pittsburgh, good places to break out."

"It's just little things," Johnson said of LaRoche's struggles, "His timing's a little off. Maybe his pitch selection is a little off, trying to make something happen. But he's a veteran hitter." - Davey Johnson on Adam LaRoche

Besides, the Nats' skipper added, LaRoche provided enough defensively to stick with him as he figured things out. "He contributes so much just defensively," the Nationals' manager explained, "I like him out there. I mean, the score [in the series finale with Cincinnati] could have been a lot worse. He made some good plays out there today, but his bat will come around."

"It helps when the team wins," LaRoche admitted in a conversation with reporters after the Nats dropped the third game to the Reds to end the last homestand. "[Winning] three of the last four has made it a lot easier. You don't sweat it as much. You come out of a game like today or a game where you leave some guys on base [and] we end up losing, [it] makes it a lot tougher." It wasn't the first slump of his career, obviously. "I've been through a bunch of them," the first baseman said, "I went through one last year for two or three weeks. I always seem to come out of it."

"I've got one of two options here," LaRoche said bluntly, "I either keep my head up, keep swinging, or I pack up and go home. I'm not ready to go home yet."

LaRoche, who sought counsel from former teammate Chipper Jones when he got to Atlanta, was 1 for 8 with a walk and a K in the first two games of the four-game set in Turner Field, both of them losses to the Braves, but he snapped the 0-for streak with a single in the first game of the series.

"I've got one of two options here," Adam LaRoche said, "I either keep my head up, keep swinging, or I pack up and go home. I'm not ready to go home yet." - Adam LaRoche on MASN after loss in Atlanta

The Nationals' first baseman finished the series in Atlanta 2 for 14, but he broke out of the hitless slump and connected for his first extra base hit in 11 games, doubling for just the second time this year in the finale with the Braves.

In Pittsburgh, LaRoche collected hits in all three games, going 2 for 3 with a walk and a run scored in a 3-1 loss in the first game, 1 for 1 with three walks in the second and 1 for 3 with a double, walk and run scored in the third game of three this past Sunday. All of a sudden, the Nats' Gold Glove and Silver Slugger-winning infielder had a four-game hit streak going and hits in five of seven games on the road trip. LaRoche ended the trip through Atlanta and Pittsburgh 6 for 21 (.286/.448/.381), with his first RBI since April 20th in NY, two doubles, seven walks and four Ks. 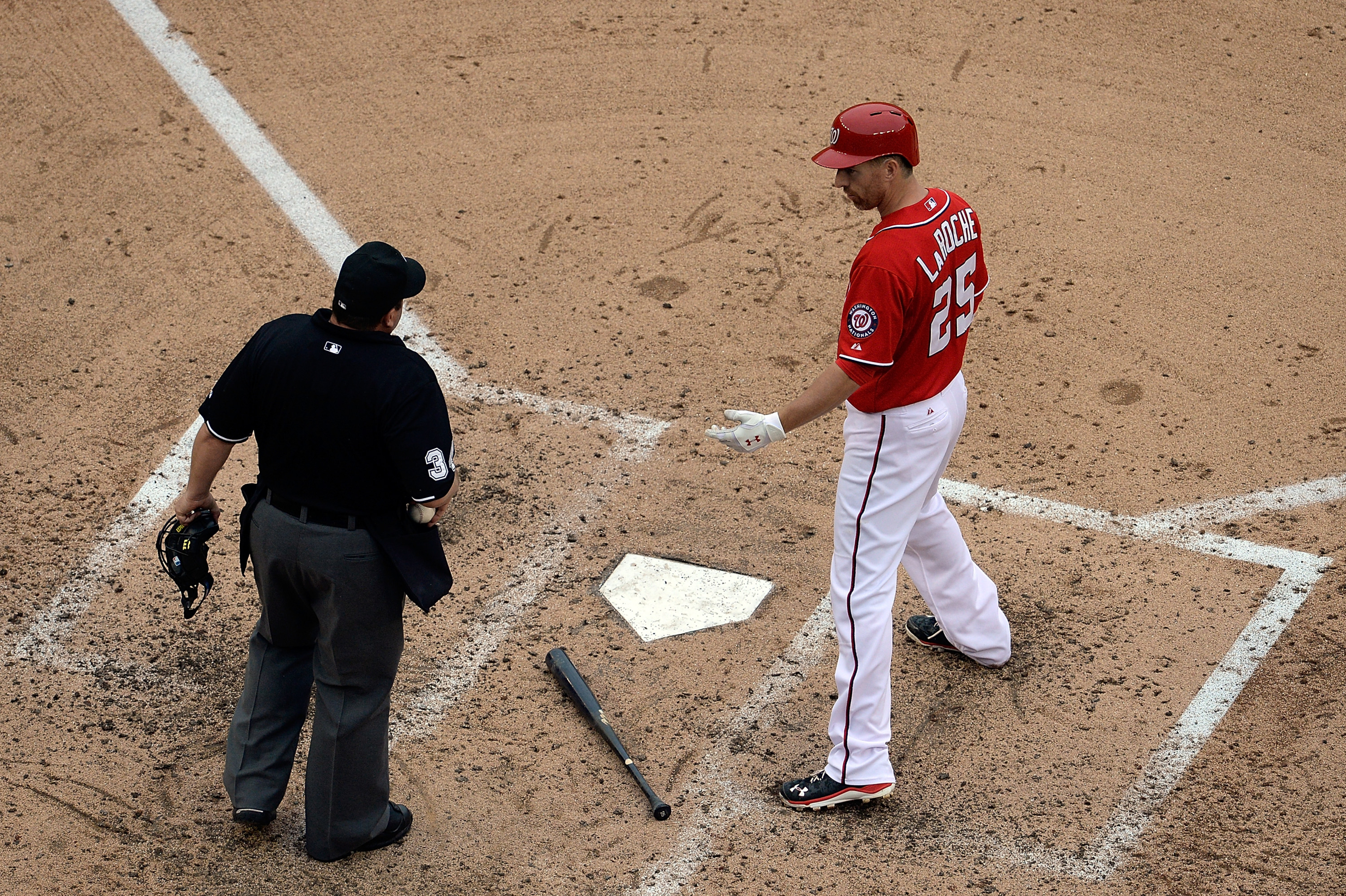 After 29 games and 110 plate appearances in his third year in the nation's capital, LaRoche has a .168/.273/.295 line with three doubles and three home runs on the year. In his last at bat of Sunday's game with the Pirates, Pittsburgh decided to put LaRoche on intentionally so right-hander Bryan Morris could face Tyler Moore instead of the Nats' first baseman. Moore hit a three-home run that blew a 3-2 game open, making it 6-2 after the top of the eighth.

LaRoche told reporters after the game that he thought the Nationals' offense worked a lot better when he was hitting. "For some reason I feel like when I get going we just score more runs," LaRoche said, "in fact, when I'm going a lot of guys are hitting and we're pushing more runs across." Will LaRoche continue to swing a hot bat at home in the nation's capital? So far this season, he has a .091/.138/.200 line with two home runs, three walks and 20 Ks in 16 games and 58 PAs in Nationals Park. In 13 games and 52 PAs way from D.C., LaRoche has a .275/.423/.425 line with three doubles, a home run, 11 walks and 12 Ks.