Colorado Rockies' right hander Jhoulys Chacin toes the rubber against the Washington Nationals tonight in Denver. Chacin is a young hurler with a good pedigree and solid component numbers. The Nats will have to work to put runs up this evening.

Mother Nature caused some baseball withdrawal over the past several days. But as some of the Federal Baseball commentariat pointed out, considering some of the injury issues that the Nats have been suffering, the postponements may be a blessing in disguise. Tonight, the Nationals start a three game set against the Rockies, who are four games over .500 for the year. Jhoulys Chacin is pitching for Colorado.

In 2004, the Rockies signed Chacin as an amateur free agent out of Maracaibo, Venezula. Three years later, he made his professional debut in rookie ball, posting a 3.13 ERA and 3.15 FIP over 92 innings pitched.

In 2008, the then 20-year-old improved his stock at Low-A Asheville and High-A Modesto, posting a combined 2.03 ERA, 1.04 WHIP and 3.81 K/BB ratio over 177 innings. Baseball American ranked Chacin as the #2 prospect in the Rockies' system, and the forty-sixth best minor-leaguer in baseball.

Promoted to Double-A Tulsa (and later Triple-A Colorado Springs) at age 21, Chacin pitched quite well, considering his age and environments. His strikeout to walk ratio decreased to 2.0, and his ERA and WHIP rose to 3.21 and 1.24, respectively. It was good enough to earn a promotion to the Majors in 2009, primarily in relief.

Chacin wouldn't stay in the Show in 2009, but his accomplishments to that point were pretty impressive. Indeed, John Sickels noted that he profiled as a ground-ball heavy hurler and concluded that

[b]asically his Double-A transition is going very well, and I don't see anything to make me change my rating of him [B+]. As long as he remains healthy, Chacin projects as a solid starting pitcher. He could stand to improve his control some, and I'd like to see him get at least a half season of Triple-A under his belt before he gets to the majors sometime in 2010.

2011 was a worthwhile follow up effort (+2.5 fWAR, for example), although during the second half Chacin struggled, as the box to the right indicates. Tristan Cockcroft profiled the twirler before the 2012 season and determined that

[i]f Chacin's changeup is indeed his plus pitch, and his slider has developed as quickly as it has, it stands to reason that his poor 2011 second half might have been a mere adjustment period and that better things lie ahead. The seeds are there for him to pair a dominant pitch versus right-handers (slider) with a similarly dominant one versus left-handers (changeup). Considering he has a two-seam fastball mostly responsible for a 52.6 percent career ground-ball rate, he's not quite as susceptible to the perils of Coors Field as a typical Rockies pitcher. This is a pitcher capable of -- at his peak -- posting balanced splits with a better-than-50-percent ground-ball rate and a healthy strikeout rate, a package fantasy owners love.

Chacin hurt his pectorial muscle in May 2012, and it led to a largely forgettable season where the righty started 14 games and pitched to a 5.15 FIP. His ground ball rate bottomed out to 38.5%, while his BABIP, walks, and HR/FB were all on the wrong side of average for a pitcher. bWAR still liked him enough to see a +1.9 win pitcher, but Fangraphs had him at +0.5. He's rebounded nicely so far this year.

Chacin only strikes out 15.5% of hitters, about 4% less than the major league average. However, he's exhibited better control in 2013, and has limited home runs to just 3.4% of fly balls -- a pretty incredible (and likely unsustainable) mark. The ground ball rate has returned, as well: At 50%, it's still not as high as the 56% mark he sported in 2011, but it's still a positive. In short, he's been worth around a win and a half according to both Fangraphs and Baseball Reference.

Chacin mainly throws four pitches, a four seam fastball, sinker, change up, and slider. As usual, use the values column as a general picture rather than a be-all. But, you can see how his slider warranted Cockcroft's optimism.

I mentioned earlier how Chacin is once again getting grounders. His general batted ball profile is below.

Here's something. In 2011, with a ground ball rate of 56%, Chacin had a BABIP of .261. With just 6% fewer grounders this year, Chacin is seeing an overall BABIP of .301. To the additional analysis section!

I looked at Chacin's grounders, since that appears to be one of the biggest parts of his game.

Brooks Baseball concisely explains in the chart below that most batted balls off Chacin's pitches are plowing more earth in 2013 than they did last year, although in fairness it'd be hard for them not to considering his poor 2012 rate. Ignore the yellow line, which represents the curve ball, since he's thrown it only a half-dozen times over 11 starts.*

*If you want to read more on why he's left the curve behind, Eno Sarris covered the matter very well earlier this year. Also, this past April, Nats fan Dan Rozenson took a great look at PITCHf/x data to determine which pitches work best in Denver. I won't spoil the read, but you can probably guess from Chacin's pitch selection which way the hammer goes.

On to the visual: 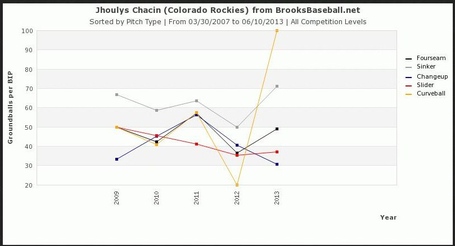 A birds-eye view of Chacin's strategy: Grounders are good because they have the lowest run value, and high ground ball pitchers typically have lower BABIPs than others. Plus, he pitches at Coors pretty often, where flies, um, fly.

So, the Venezuelan is getting grounders on 48% of his fastballs in play, and stunning 71% grounders on sinkers. Check out Chacin's results on ground balls over the last three years; a lower sOPS+ value (green bar) is better. Sorry that it's somewhat seizure-inducing to figure out (green bar corresponds with left y-axis, blue and red with right): 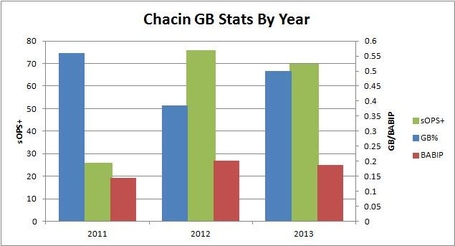 Feel free to make jokes about my Excel competency below. Anyway, Chacin's strength was a big strength in 2011, as the chart indicates, whereas that fortune was largely reversed in 2012. He's settled somewhere in between this year, still getting worm-burners, but not showing as low a grounder BABIP as the year "Rolling in the Deep" topped the Billboard 100. Somewhat consequently, he is only doing about 30% better than the average big leaguer when getting ground balls.

There's nothing wrong with above-average, of course, and Chacin's sinker in particular is really separating itself as a tough offering to elevate (.224 BABIP), whereas the fastball is more likely to be hit hard (.333 BABIP).

Texas Leaguers, another great data site, may help explain why this is so; check out the height of the orange triangle (sinker, for our purposes, and the lowest plot) 15 feet out from the plate and in, versus the red square (fastball), which tracks the purple square:

You can see how the sinker generates more downward movement with gravity than does the fastball, which sits higher in the strike zone. Indeed, Chacin is, on the whole, seeing better results with the sinker down than he is with the fastball a little further up (but, duh).

The Nationals hit the 9th most ground balls in the league, which works in Chacin's favor. And with the up-and-down nature of the team's hitting this year (often, down), there's just no telling if the D.C. squad will have a good chance at elevating balls into the thin mountain air. After a good Sunday and plenty of rest, however, there's still hope to be had that the Nats will kick the road trip off right and continue to chase down Atlanta for the division lead.