Read up on Justin Masterson, and you'll probably learn two things: First, he is a ground ball pitcher. Second, left handed batters hit him well. But his slider effectiveness is something that is less publicized. Its potency tonight may likely determine the Nats' offensive success.

Do we look back at this stretch of the schedule in November and say, "that was the time the Nats turned things around"? Recently, Washington has been hitting better, pitching better (particularly the bullpen), and largely fielding...not terribly. The Baseball Gods also appear to be smiling on the team; between balks, injuries to opponents, and improvements in health, things are swinging in a favorable direction.

Will Justin Masterson stop the uptick?

Later in 2007, Masterson was bumped up to Double-A Portland. The punch-outs came back (24.7%) and good control was evident. It was good enough to land him the 64th best prospect label from Baseball America, and the 4th best prospect in the Red Sox system. Early in 2008, John Sickels said that "[he] projects as a number three inning-eating, sinkerballing starter if his changeup comes around."

Masterson debuted for Boston that year, at age 23, and had the reputation as a ground ball pitcher. If you looked at his ERA (3.16), you saw a great success. But looking at the things he could help the most, observers saw room for improvement. He struck out a slightly above-average number of hitters, but walked an above-average amount, too. Plus, his HR/FB rate was high enough to nearly earn a learner's permit (14.9%).

If Masterson keeps his current pace up, he has a good shot at having a new career-best year.

Masterson is striking out more hitters this year than ever before; his 23.2% rate is about 3% greater than the major-league rate. You could say his walks aren't killing him, because he's a little more than 1% worse than average there. He's stranding three out of every four runners who reach base, and has a fair HR/FB rate (10.5%) and good BABIP (.278).

The 6'6 hurler accomplishes his results with a four seam, sinker, and slider combo. Among all pitchers I've profiled, it seems Masterson comes with the fewest offerings.

By raw value, Masterson sports the second best slider in the majors. Here are some reasons why. The pitch has the:

Lest the focus be too much on his excellent slider, Masterson has also used his sinker effectively this year. As you might expect, he gets a lot of grounders with the offering (64% for his career), and the pitch has movement that Sickels once described as having an "ungodly sinking action." It is whiffle-ballish for its arm-side run and sharp darting movement downward.

Considering the scouting reports on Masterson as he came up, the below shouldn't be too much of a surprise.

Although he's getting plenty of ground balls, xBABIP thinks he should be seeing less favorable results. Results on his ground balls aren't really to thank for his good fortune, though; the MLB average BABIP on grounders this year is .230, while Masterson is seeing a .236 BABIP on the same. Still, one might reasonably expect a lower rate than .230, considering that high grounder pitchers typically see a lower BABIP than non-grounder focused hurlers.

There's been some excellent writing on Masterson this year, and I struggled over the last few days to add novelty to the dialogue. In late April, Eno Sarris of Fangraphs recommended that fantasy owners spot-start the Jamaican-born pitcher because a change in his approach hadn't, location-wise, yielded better results against lefties. On slider location, Sarris appropriately observed that "[t]here’s one nice cluster of front-door sliders, and then a whole lot of danger."

The table to the right shows how Masterson has heretofore been below average against lefties (100 is major league average, and lower is better), and further supported Sarris's point: Sure, the Indians' hurler said he was going to change his approach against hitters from the left, and he did in the form of throwing them more sliders, but what good would it do to just serve up more hittable pitches?

Several weeks later, Masterson sported a combined 3.09 FIP over three consecutive starts. Dayn Perry of CBS sports observed after the final start of that trinity -- a complete game, nine-strikeout showing against a Yankee lineup featuring six lefties -- that Masterson had improved the horizontal movement on his slider, and "[a]s such, perhaps the pitch has gone from the wheelhouse of left-handed batters to the kitchen of same." The hurler was improving, Perry thought, but still had areas where he realistically could get better.

Here are batting average and slugging slash lines for lefties and righties against Masterson's pitches this year:

A *** means the particular pitch saw results against a hitter handedness most often, and * meant the pitch got results least often.

As Perry noted, slash lines don't quite tell the whole story. In 2012, Masterson struck out 13.5% and walked 10.5% of lefties. He's walking the same number of lefties this year, but is striking out 18.4% (1% below major league average). In short, he's continuing to get better: currently, he's 10% better against lefties than the average MLB pitcher.

Indeed, Masterson is getting more of his pitches inside against lefties in both one strike and two strike counts this year, as compared to last. The paired graphics below show 2013 location to lefties on one strike (left) and two strike (right) counts (view from catcher). 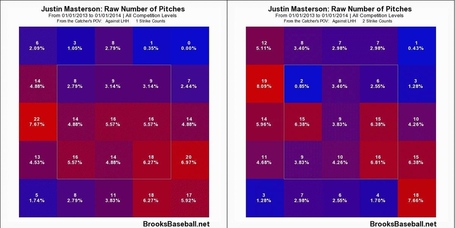 So, as the year has gone on, it appears Masterson has done a better job locating against lefties. But there's nothing in his horizontal release point that's more consistent from start to start as he's improved (same for vertical), and his sideways slider movement in particular is also fairly variable. For example, his movement against the Yankees was mostly the same in two starts this year, but he was hammered in one and (as mentioned) threw a complete game shutout in the other.

Maybe he's adjusted his position on the rubber in an effort to get the ball inside to lefties more often.

Here's where he was in 2012 against Joey Votto, with an inside target on a sinker. Note his pivot foot position in the middle of the "C" logo behind the mound for this pitch: 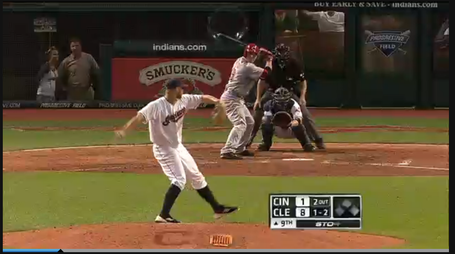 Now we have this year. Below, Masterson throws an inside fastball to an inside target against a lefty, and gets a strikeout. See again his pivot foot position on this pitch relative to the "C" logo, particularly his toe as it appears to be in the middle area of the letter, similar to last year (sorry about the play bar being up): 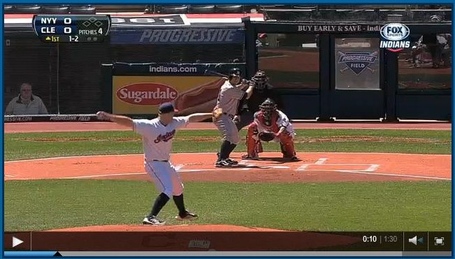 Different game, same ball park, same broadcast (although the zoom appears different). Here is a strikeout on a change, to be located middle/away-low to a lefty. He's slightly more to the right, on the top-right edge of the "C": 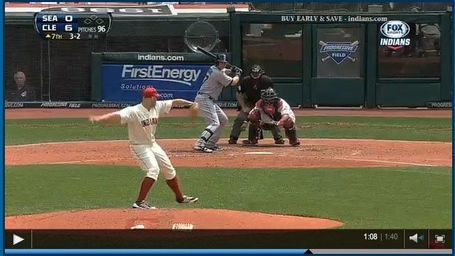 Same game as last example, this is a sinker to be located in to a righty, was in fact located in, and earned a strikeout. Like the last image, where Masterson threw to the right side of the plate, his pivot toe is closer to the edge of the "C": 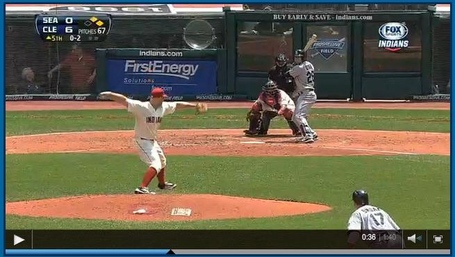 Of course, there are several assumptions here, and I'm not certain that there's a meaningful difference in rubber position between inside and outside locations. Even if there is, it looks like he did the same sort of thing last year, with results that weren't as good. So, in my unscientific opinion, I think this explanation can probably be ruled out.

Surely, four random examples do not a trend make. However, if Masterson is pivoting more to the left side of the rubber when he tries to pitch inside to lefties, you would expect Nats' advance scouts to have noticed such a thing.

More generally: We know the Nats hit into grounders, we know Masterson gets those, and I regret to update fans that D.C. is 28th out of 30 MLB teams in slider pitch value, and dead last against the sinker (probably correlates to the ground ball rate, some).

But occasionally opponents' stars get hurt in the on-deck circle, attempting to bunt, or stopping a ball at short. Other times, they subtly give away their strategy through release point, pitch selection, or rubber position. Perhaps there is some level of preparation that affords Washington an advantage tonight; perhaps it's just balkin' Bob Davidson with nowhere else to be, or the possibility of some other good fortune that makes every game worth watching. My hope? Shockingly, I'll take all of it, as long as a win ends up on the board.

Thanks to Baseball Reference, BP, Brooks, and Fangraphs for statistics and information.