Washington Nationals' prospect Narciso Mesa is a 21-year-old Dominican-born outfielder who has been in the Nats' organization since 2010. Auburn Doubledays beat writer Jeremy Houghtaling caught up with Mesa on Saturday at the Doubledays' media day. The Class-A Short Season affiliate plays its first game on Monday.

The Auburn Doubledays outfielder stole 11 bases, bunted for numerous base hits and legged out six doubles in his 32-game New York-Penn League stint in 2012. With so much raw talent, Doubledays manager Gary Cathcart is working on harnessing the 21-year-old Dominican's fleet feet. Auburn, the Short Season-A affiliate of the Washington Nationals, hopes Mesa creates some chaos -- albeit controlled chaos -- on the basepaths as the team begins its defense of the Pinckney Division title against Batavia on Monday.

"The one thing he does have, obviously, is the tool of speed," Cathcart said of Mesa. "One thing he doesn't have a grasp of yet is what to do with that." - Doubledays' manager Gary Catchart on Narciso Mesa

"The one thing he does have, obviously, is the tool of speed," Cathcart said of Mesa. "One thing he doesn't have a grasp of yet is what to do with that. He still makes a lot of mistakes. He steals a lot of bases just on that speed, but that's obviously going to change when you get to the higher levels."

Mesa started the season with Hagerstown (Class A), but was unable to showcase his talents. He took a ball off his wrist and was placed on the disabled list before he could get in a game.

"One thing for me is baserunning," Mesa said through a translator. "I am focused on that this year…That's my biggest asset, baserunning and speed." - Narciso Mesa to Jeremy Houghtaling

Mesa, who described his personality as humble and relaxed, said he was 100-percent and ready to go for the start of the Doubledays' season at media day Saturday afternoon at Falcon Park.

Although he batted .343 with 13 RBI and 24 runs scored in Auburn last year, Mesa knows he is in his element when he is on base. Along with his command of the English language, being smart on the basepaths is something the 5-11, 175-pounder plans to refine this season. 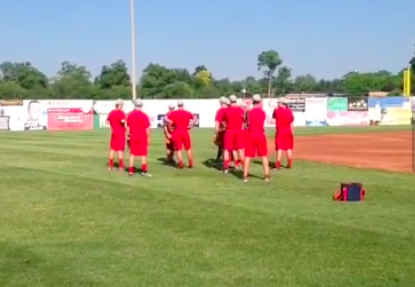 "One thing for me is baserunning," Mesa said through a translator. "I am focused on that this year…That's my biggest asset, baserunning and speed."

With pitchers and catchers at higher levels more adept at handling larcenous baserunners, Cathcart knows Mesa needs to slow down and round out the mental parts of his game to take the next step in his career.

"We're still working with him almost on a daily basis about understanding why we run in certain situations and why we don't run," he said. "Why he would have a green light in a situation and why he wouldn't."

Who is excited for tomorrow night? We are! #seasonopener